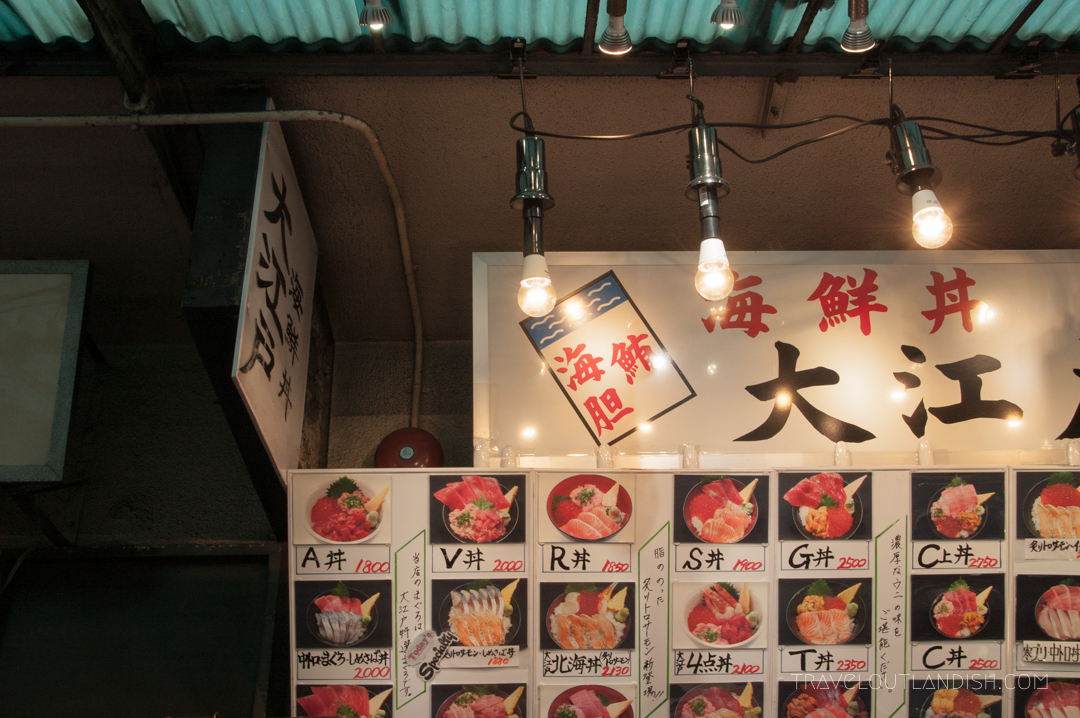 2019 Update: Tsukiji Fish Market is officially closed after 83 years in operation! It’s been relocated and now runs under the name Toyosu Fish Market. You can find more information about visiting Toyosu Fish Market here or explore some of the other best fish in the world markets here.

read about the original market below.

Tsukiji Fish Market – the world’s largest wholesale fish market – sells off an estimated 2,888 tons of 450 kinds of seafood each day. To put it simply? That’s a hell of a lot of sushi.

From lofted ceiling to puddle soaked floor, the Tsukiji Fish Market emits an energy that could fill a space ten times its size. Instead, more than 900+ vendors are crammed inside a space so congested that only Tokyo could pull it off. Just like the city of Tokyo itself, the Tsukiji Fish Market perfectly hectic. You can take our word for it, or see for yourself!

You should visit Tsukiji Fish Market in the early morning while the market is most lively and the fish is fresh. You can either get up frightfully early for the tuna auction or enjoy a bowl of donburi in the Tsukiji Outer Market before exploring the main event. Below, you’ll find a rough Tsukiji Fish Market schedule:

One of the most famed experiences at the Tsukiji Fish Market is the tuna auction. City restauranteurs, middlemen, and foreign buyers will bid loads of money to buy some of the massive tuna sold here. The most expensive tuna to ever pass hands here was just a cool $1.8 million.

As it is a working auction, there are a limited number of spaces open to the public. If you want to see the tuna auction at Tsukiji, plan to get there around 3am to reserve your spot. The auction won’t start until 5:30am, but as it isn’t available for pre-booking, only the first 120 people who show up will get in.

Worth it? While the tuna auction may be some real Casino Royale stuff, it isn’t a make or break for the Tsukiji Fish Market experience. If you feel like getting extra sleep and saving on cab fare, show up around 8am to get sushi or a donburi bowl, and wander the inner market before it closes off at 10am.

While the Tsukiji outer market sells more produce, seasonings, and souvenirs than fish, it’s worth visiting for the restaurants alone. Perhaps the best of all fish market experiences is the Tsukiji Fish Market breakfast sushi. We came expecting the best thing we ever ate, and the donburi did not disappoint. Lines are awfully long so be sure to show up by 8am if you’re hoping to eat and make it into the inner market before it winds down too much!

Prices for donburi and sushi in the Tsukiji outer market fall anywhere between $12-$30, but we’re telling you now — it’s worth whatever you spend on it. We don’t want to get your expectations up or anything, but it should be the most highly anticipated meal of your life. 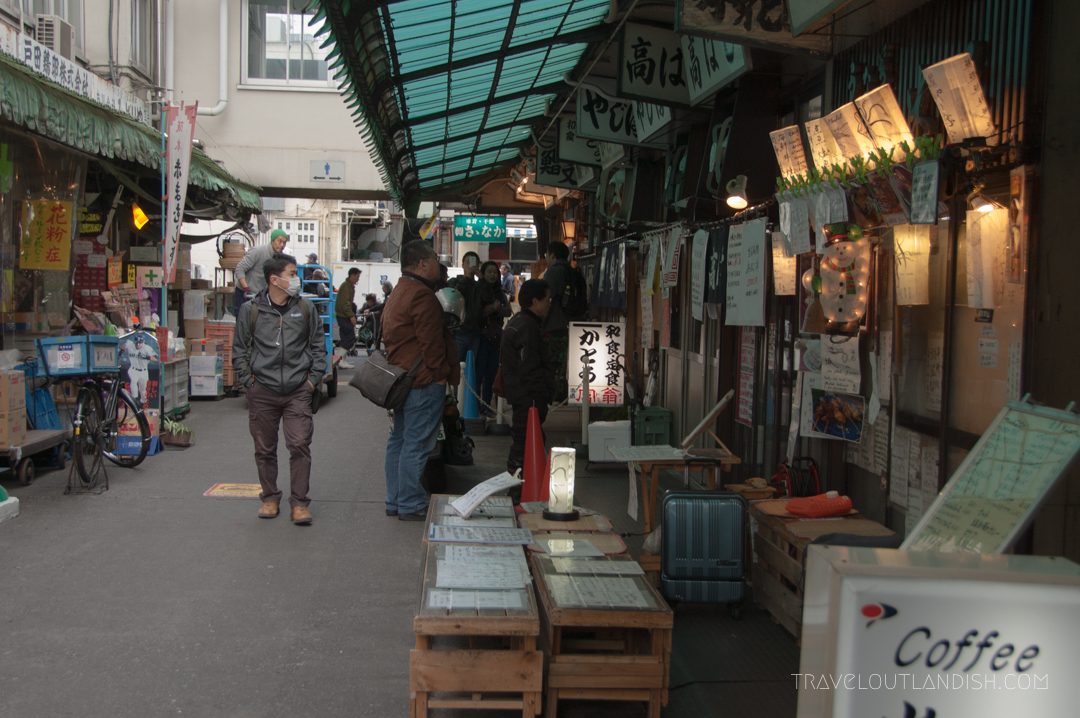 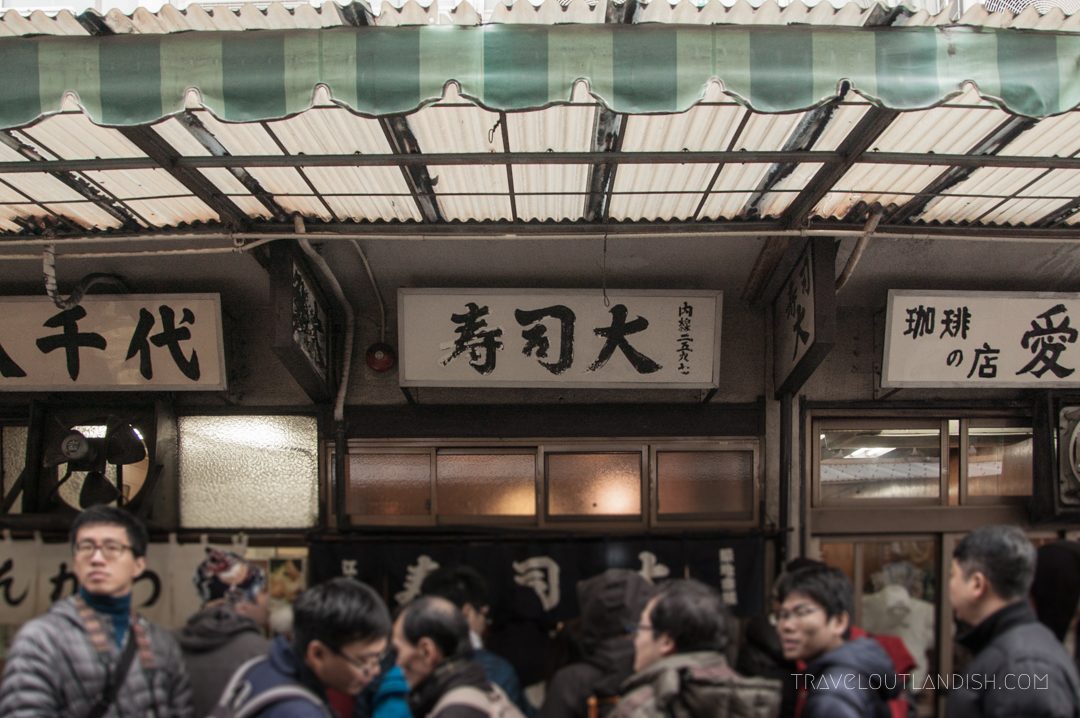 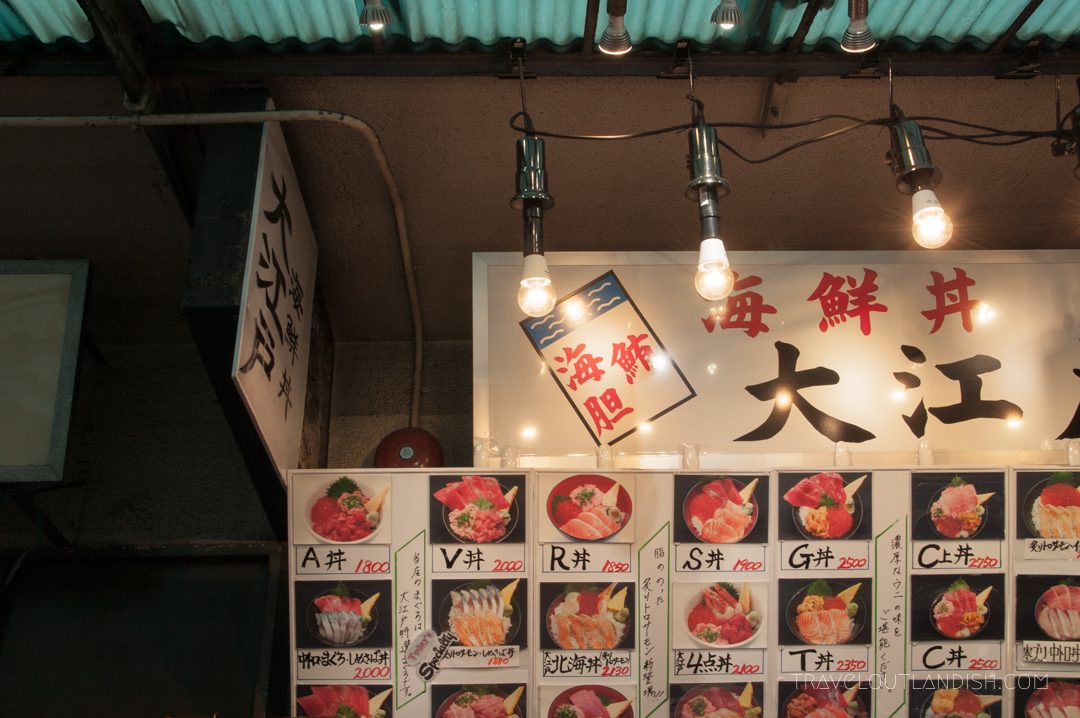 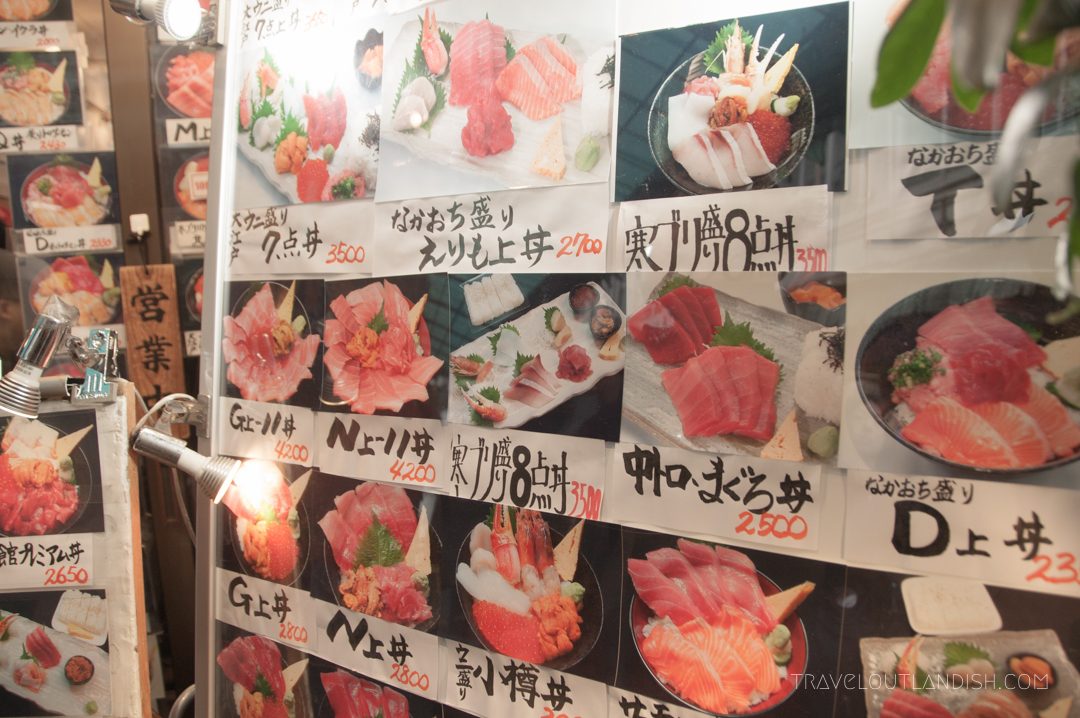 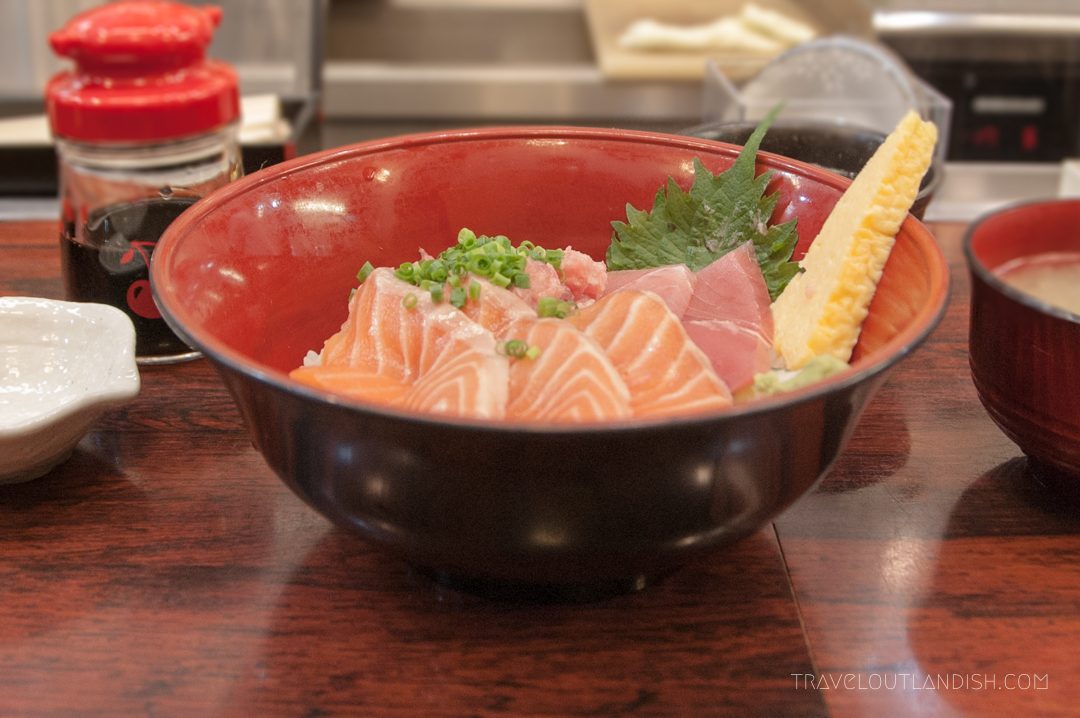 inside the Tsukiji inner market

The Tsukiji Fish Market is a labyrinth. We had to avoid getting run over by movers by cutting between styrofoam crates and wooden boxes. The vehicles probably went no faster than a child zipping downhill on a bike, but their heavy loads made them a true threat for neglected toes. 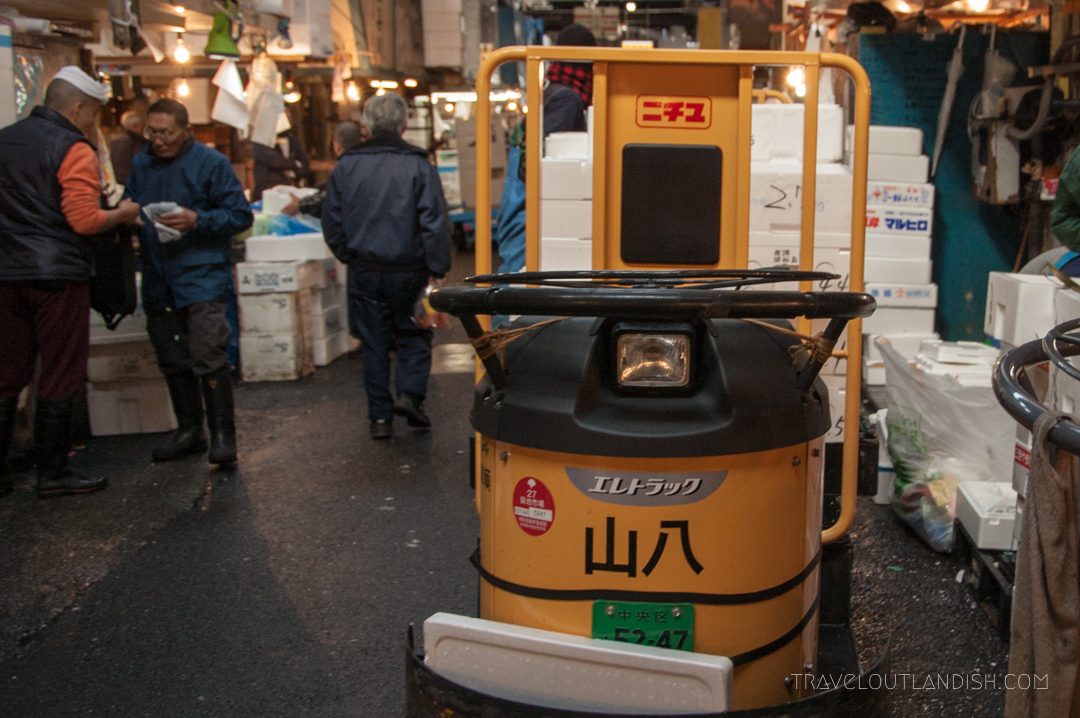 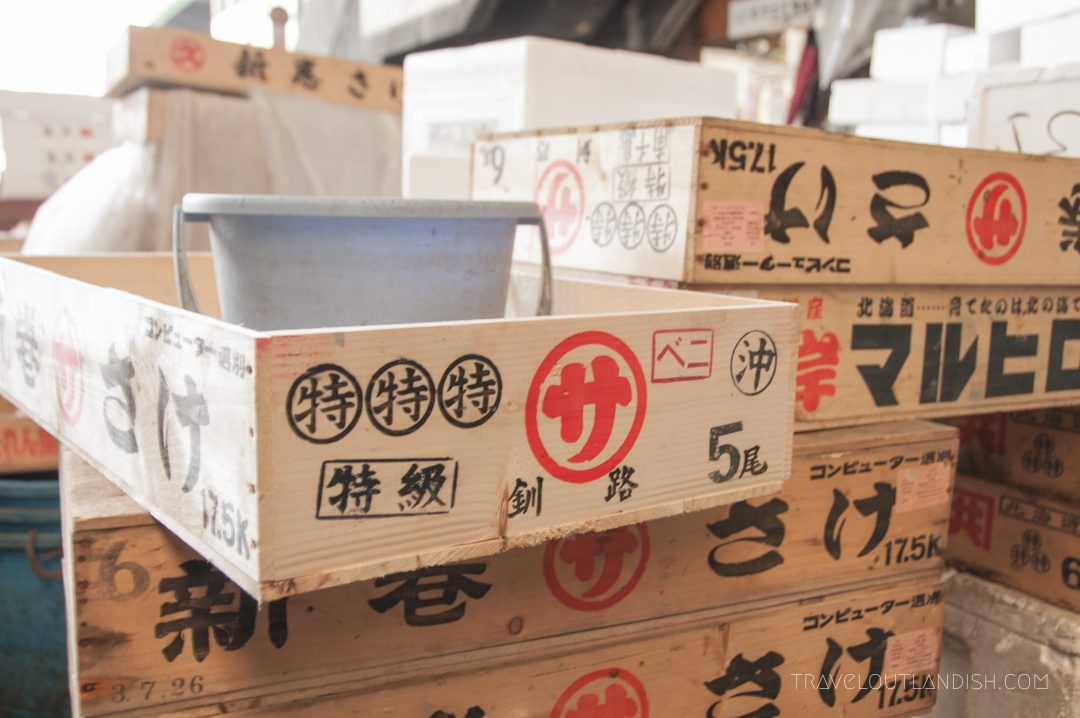 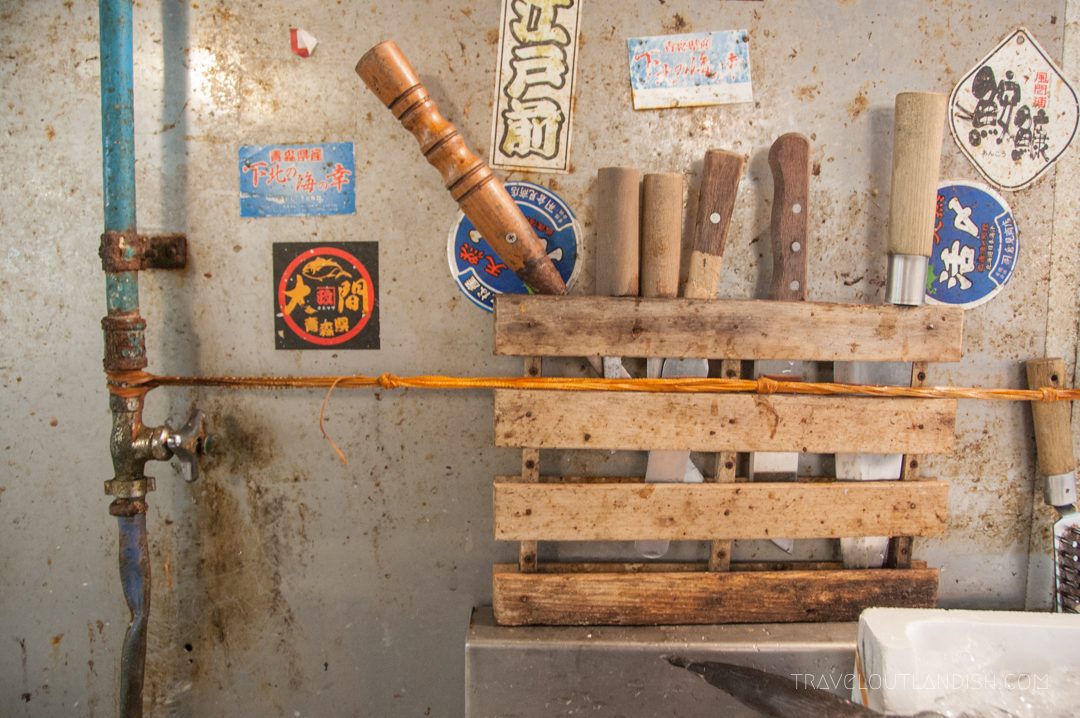 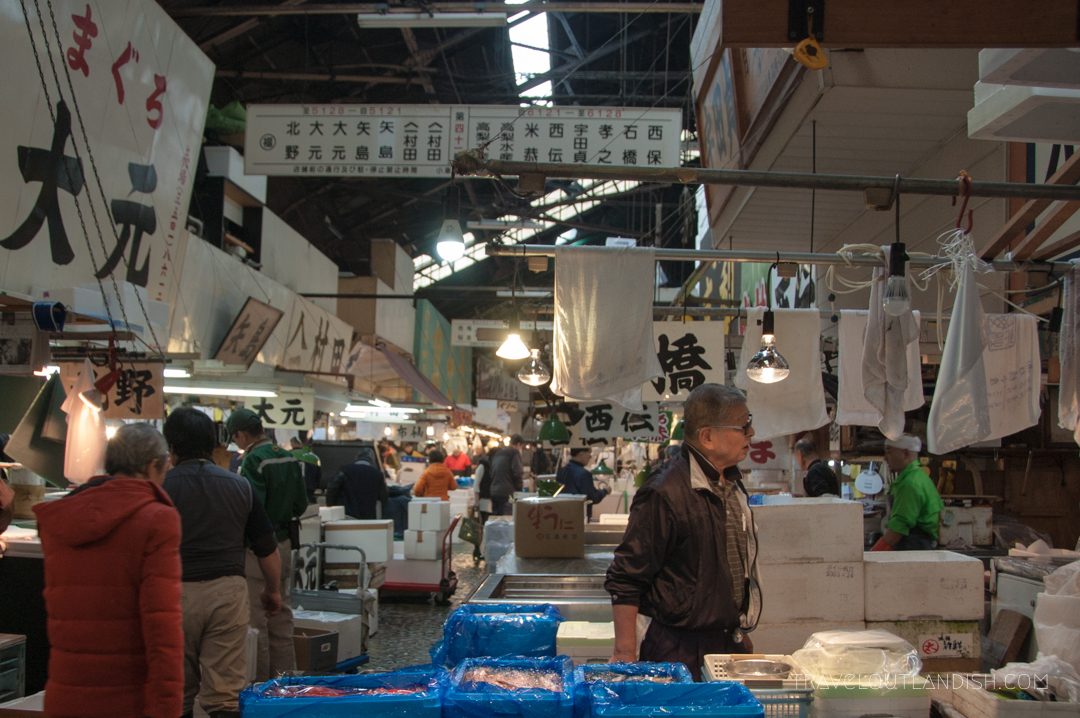 Cutting down a quiet row, we discovered plastic crates filled with scallops and their shelled brethren, and shrimps sold by the hundred. Everything of the marine variety was for sale, and the offerings continually evolved, aisle by aisle. Mackerel, eel, snapper and yellowtail stared up at us with thoughtless dead eyes. But passing by stall after stall of squids bathing in their own black ink and live octopus’ trapped in mesh bags was different. It was as though they were there to remind you that with every bowl of donburi comes death. 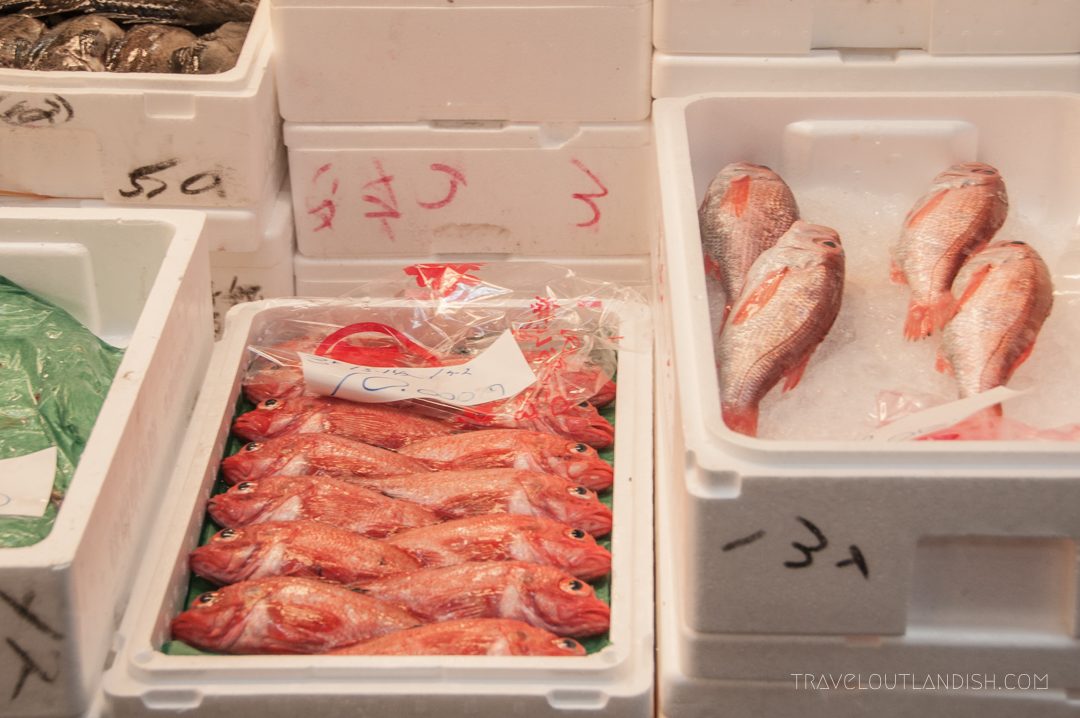 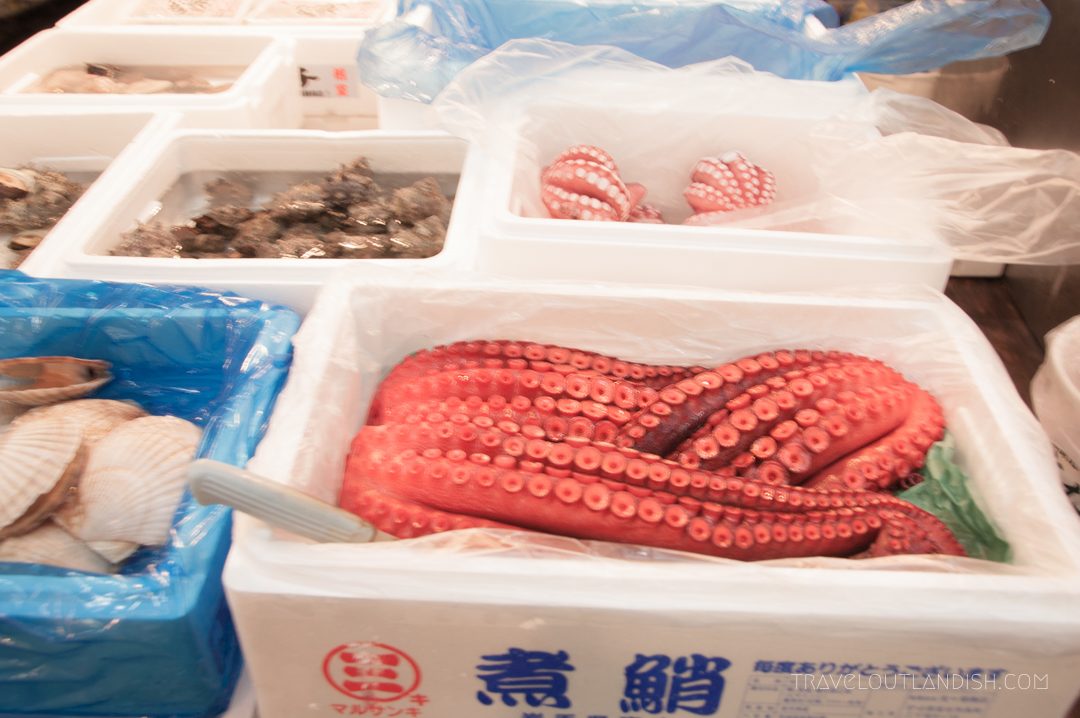 On a wooden tabletop laid a massive tuna — some 100 lbs of it – frozen solid. A man with cheekbones nearly as sharp as his blades hoisted it up, and fed it through a machine like a board past a table saw, slicing the fish into filets with precisely smooth edges. 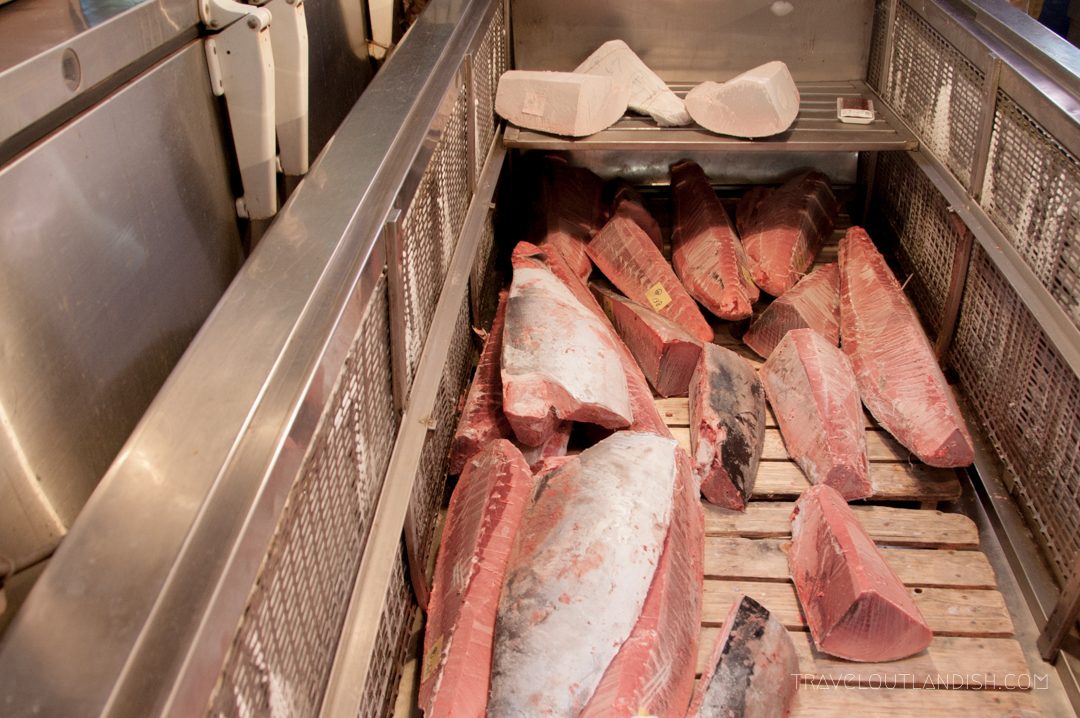 Never mind that we later learned real precision comes from slicing tuna with a sword, but some mornings? You’ve just gotta get shit done. 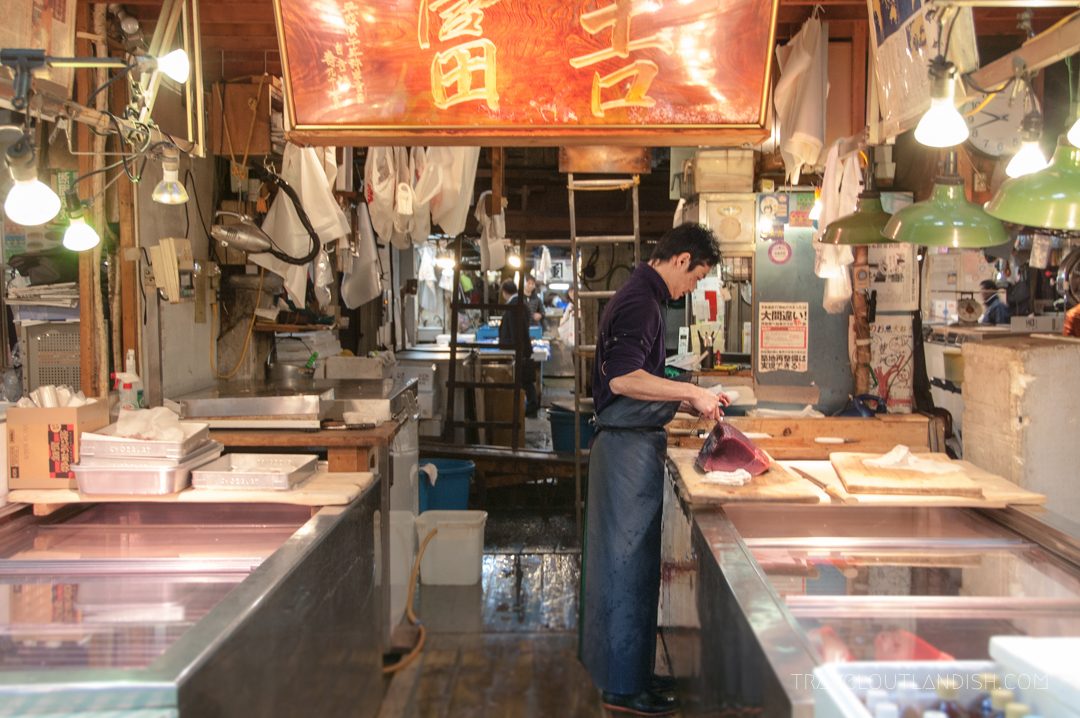 They are constantly hosing the floor, to clear the guts away, most likely. There is a chatter and a yelling, between coworkers and neighbors. Close competitors are close friends. As the morning ends, accountants tally up the day’s sales with frenetic energy. The Tsukiji Fish Market is nothing short of everything we’d expected. 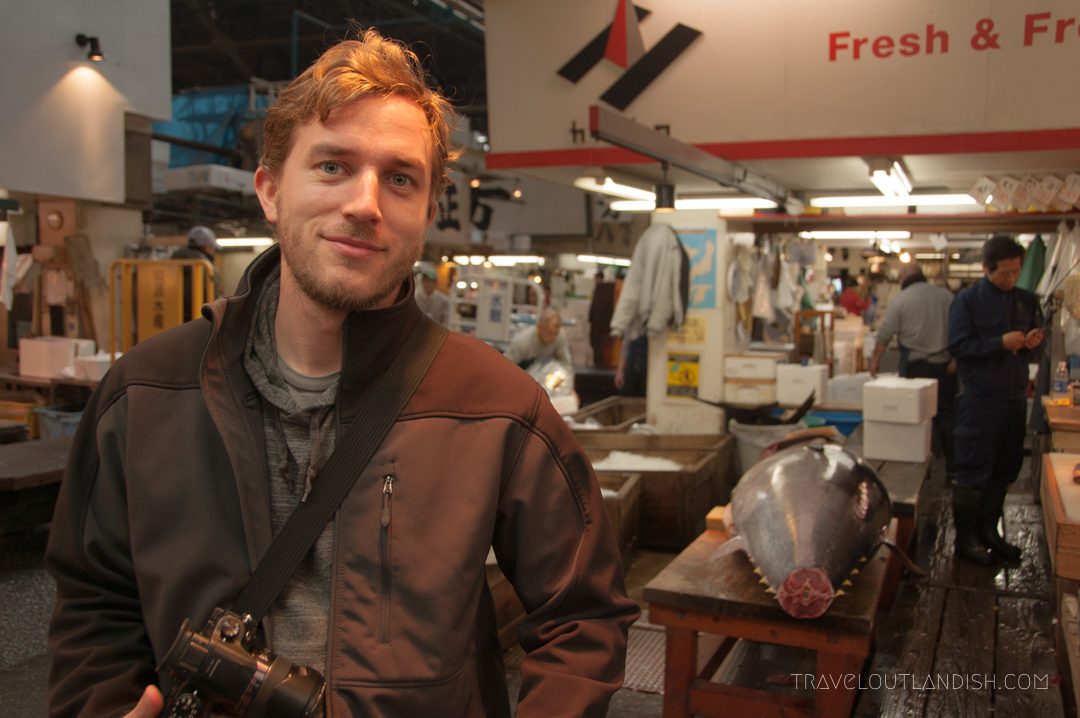 Have you been to Tsukiji? Did you think it was gruesome or fascinating? Share your thoughts in the comments below.