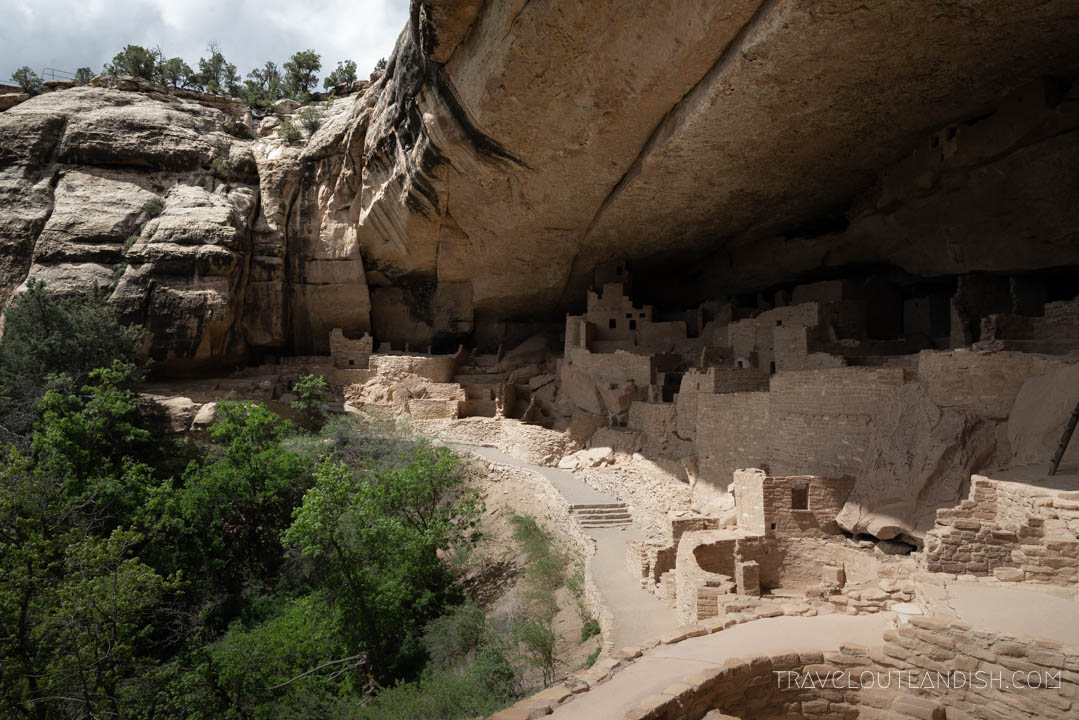 “Mesa Verde was never unknown or a lost civilization. Just unknown to new settlers.”The narration in the park film at Mesa Verde National Park sheds light on something often mistaken; we’re quick to call places “undiscovered” when all we really mean to say is that they’re undiscovered by us. Because in reality, Mesa Verde was very much known back in 900AD. It was known to the ancestral Puebloans who built the apartment-style cliff dwellings into the sandstone and was widely talked about by everyone who lived in the region. For the centuries that followed, it was known by Hopi and Zuni descendants. It was known before some cowboys came upon it while looking for lost livestock in 1888. It was hidden, and perhaps overgrown, but certainly not unknown.

Today, Mesa Verde is probably one of the most underrated experiences in the US. There are plenty of things to do in Mesa Verde, with cliff dwellings and artifacts to explore, short hiking trails, and even a lecture series. Sites like Cliff Palace are reminiscent of Machu Picchu, though they get way less publicity.

Ready to visit Mesa Verde National Park? Here’s everything you need to know from park entrance, to hikes, to campsites, to a short history of the site.

Mesa Verde National Park is in Southwest Colorado and it’s one of the few U.S. National Parks that protects an archeological heritage. There are nearly 5,000 archeological sites protected in the park, but it’s best known for the 600 cliff dwellings that are some of the best-preserved in North America.

Planning ahead? Unlike the other parks, Morefield Campsite at Mesa Verde rarely fills. Backpacking is restricted to preserve archeological sites, so you won’t need to get permits ahead of time. That said, I still recommend going to the Visitor Center 1-2 days in advance to secure Mesa Verde tour tickets which are required to visit all the cliff dwellings (like Balcony House, Cliff Palace, Spruce Tree House, or Long House). Some cliff dwellings are closed seasonally, so you might want to check closures and plan your trip accordingly.

When to go. The best time to visit Mesa Verde is between April and October. These are the months when Morefield Campground and the majority cliff dwellings are open. This is also when you’ll get the best weather at Mesa Verde with infrequent rains and easy summer heat. If you want to avoid the crowds, aim to visit in April or October when the school tours have slowed. While it’s open year-round, the site is at high altitude. It can get cold and there are sometimes road closures if it snows.

The nomadic people who would later build Mesa Verde started living in the area between 3,000 and 5,000 years ago, but the best records start from 450AD. The ancestral Puebloans migrated into the area and lived in pit houses to start. The park has a detailed recount of what they were doing during this era, primarily because of abundant artifacts left behind. Woven baskets, hunted animal bones, and seeds indicated that the people were basket weavers, hunters, and gatherers from the start. As their society evolved, they also made jewelry and pottery that they painted with it intricate geometric patterns. This suggests that rather than scratching by, the Puebloans were thriving at Mesa Verde.

From 750AD to around 1190 AD, the ancestral Puebloans lived on cliff tops where they domesticated turkeys and grew beans. But at the end of that period, they left their houses on the clifftops and began building apartments in the sandstone below. They created cliff dwellings that allowed them to be remote and protected while maintaining a connection to the world through trade. Those cliff dwellings are what Mesa Verde is best known for today.

The ancestral Puebloans abandoned Mesa Verde en masse in 1285. While the reasons for deserting aren’t completely clear, most of the research points towards the Great Drought which led to food shortages and social conflicts. 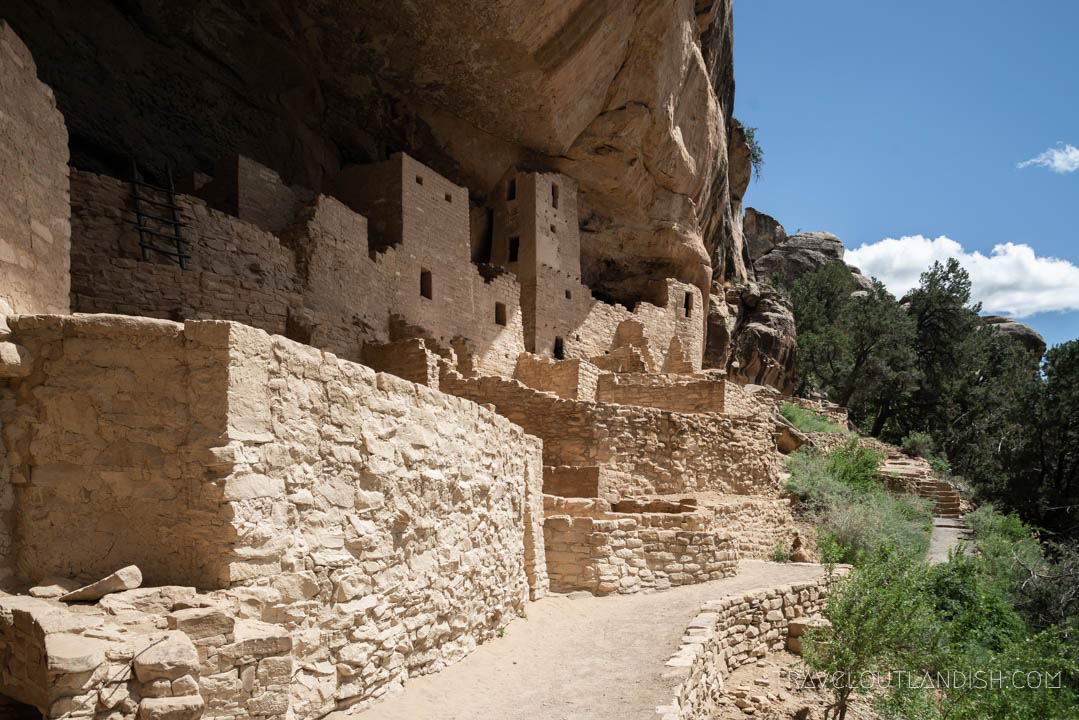 There are plenty of reasons to visit Mesa Verde, but there are a few standouts. From exploring cliff dwellings to scenic drives, here are some of the most interesting things to do in Mesa Verde when you visit.

While everyone knows about archeological sites like Machu Picchu, Mesa Verde is less-known worldwide. Its cliff dwellings – houses built into sandstone beneath the cliffs – are some of the most celebrated examples of this building style in the world.

As of 2019, there are five cliff dwellings that you can explore on a tour led by a Mesa Verde guide: Balcony House, Cliff Palace, Long House, Spruce Tree House, and Step House.

Cliff Palace is the largest cliff dwellings at Mesa Verde with an estimated 150 rooms and 22 kivas. It’s the most popular Mesa Verde tour but worth getting a spot on to see the breadth of what they could accomplish. Balcony House is also quite cool as it’s only accessible by a 32-foot ladder, and you have to crawl through tunnels and passageways to see it. Most tours depart daily between April and October. Tickets for Mesa Verde tours must be purchased in person and cost $5.

The Mesa Top Loop Road is a 10-km scenic drive with twelve sites and viewpoints along the way. On the drive, you can get excellent views of Cliff Palace from both Sun Point and Sun Temple. While the park is known for its archeological sites, the park also has a really rich biodiversity. Look out across sagebrush-covered valleys. There are plenty of pinyon-juniper, Douglas-fir and Ponderosa pine forests. And if you’re lucky, you might spot one of the mammals or birds the park is famous for.

From April to October, The Four Corners Lecture Series presents on topics of archeological or Native American interest. Learn about everything from biological soil crusts to the history of Hopi women at locations across town. Local Hopi and Zuni groups are descendants of the ancestral Puebloans and have an oral storytelling tradition that will add a layer of depth to your Mesa Verde National Park experience.

Hiking in Mesa Verde is quite limited in order to protect the archeological sites. That said, are a few trails ranging from .8- 12.5 km. While you won’t see cliff dwellings on any self guided hikes (those are all guided), you will be able to check out local wildlife and scenery.

The Prater Ridge Trail starts from the Morefield Campground and loops 12.5km around the ridge of the canyon. It’s a moderate hike that gains 300m and since it’s the longest trail in the park, it gets a fair amount of foot traffic. You’ll be overlooking paved roads for part of the trail, but keep an eye out – eventually, it opens up to canyon views– and you’ll always have the chance to spot wildflowers and wildlife. 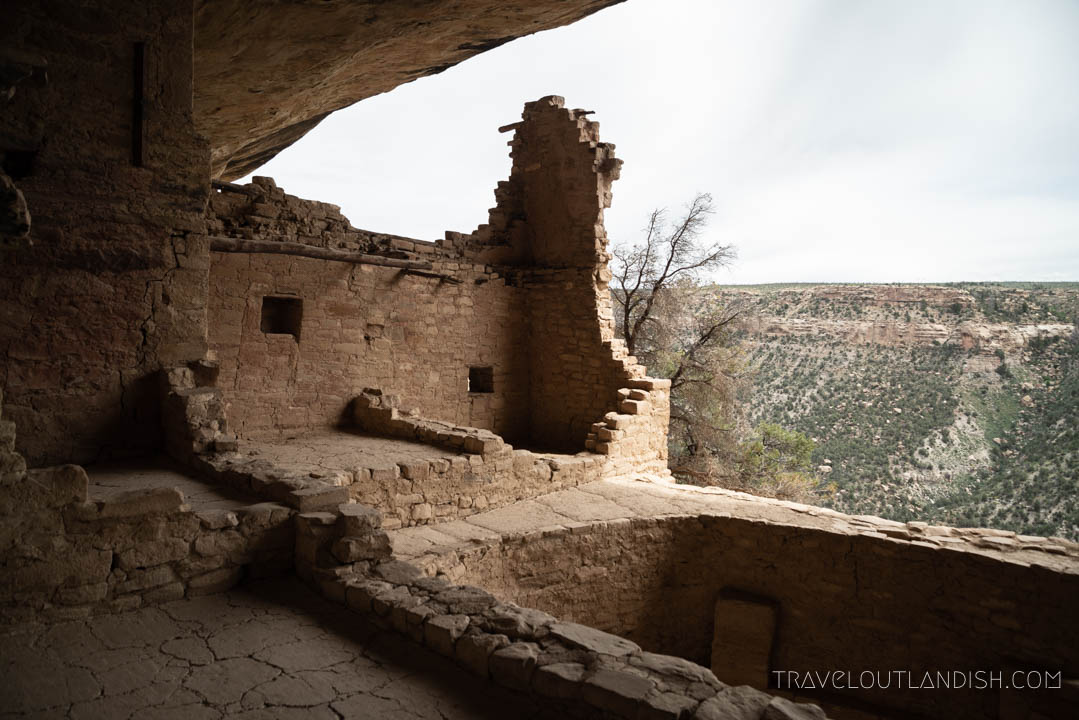 Mesa Verde is in a remote corner of Colorado. While it’s possible to get to the region, it’s easiest to have your own car when you get there. Here’s a bit more information about how to get there and how to get around once you’re at the park.

HOW TO GET TO MESA VERDE

The nearest airports to Mesa Verde National Park are the Durango-La Plata Airport (DRO), the Cortez Municipal Airport (CEZ), and Four Corners Regional Airport (FMN). From any of these airports, you’ll have to drive another 2 hours to get to the park. It’s worth noting all are regional and probably a bit expensive. The closest international airports are Albuquerque International Sunport (ABQ) and Sky Harbor International Airport (PHX) in Phoenix. You’ll have to drive 4-6 hours to Mesa Verde, but you might save on airfare.

The easiest way to get to Mesa Verde National Park is by private car, but there are some busses and shuttles that run to Cortez. For example, High Up Tours and Road Runner Stagelines run airport shuttles from Durango to Cortez. From Cortez to Mesa Verde National Park is another hour. You’ll need to pay for a taxi or have your own wheels to get there.

GETTING AROUND MESA VERDE

There’s no shuttle at Mesa Verde, so you’ll need to have a car or another method of transportation. The Visitor Center is near the park entrance and it’s another 34km on to the museum and Spruce Tree House. Because the attractions are so far from the entrance, it can take an hour just to get in.

Mesa Verde has one campsite with 267 sites and a historic lodge called the Farview Lodge. Unlike many of the other parks, the campground at almost always has walk-up availability. The Lodge needs to be reserved in advance. 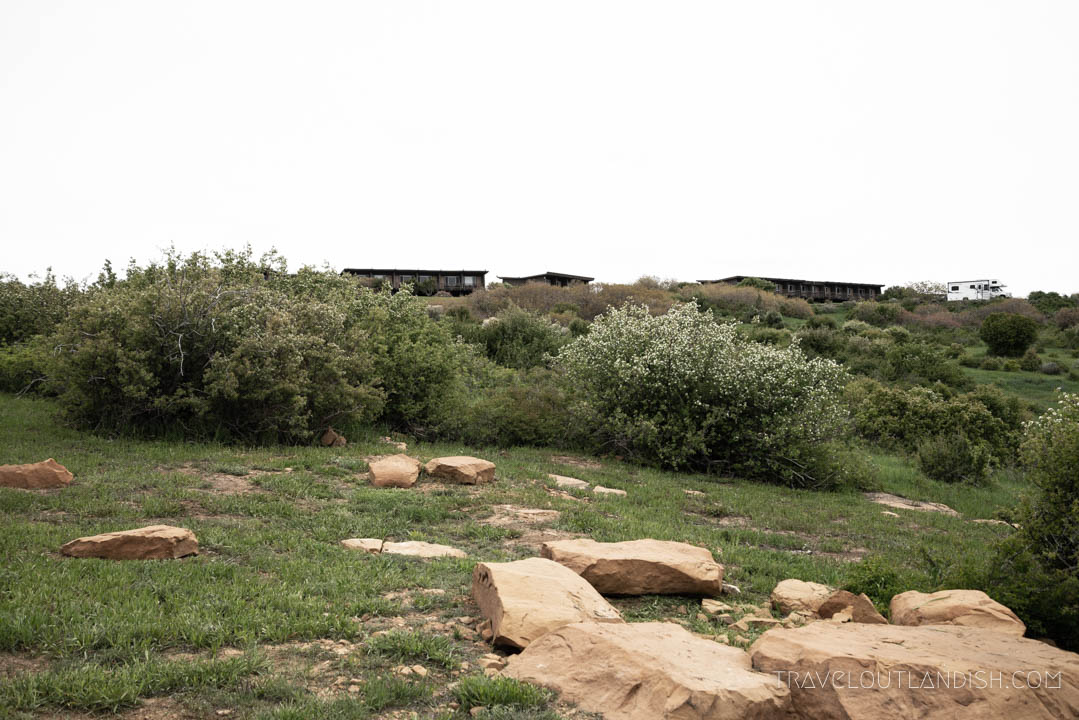 Morefield Campground | Morefield Campground is the only spot for camping in Mesa Verde and  is open mid-April to mid-October. The sites are surrounded by scrub and flowers, with regular animal passersby’s, and the camp serves as a trailhead for many of the hikes in the park. Morefield sites are equipped with a picnic table and firepit, and include access to bathrooms with running water and flush toilets. Other facilities available in Morefield Village are a gas station and coin-op laundry. Tent sites from $33.

Far View Lodge | 24 km inside the park, the cabins at the Far View Lodge have Western style with handcrafted furniture and fantastic views of the canyon below. Well worth the splurge for a relaxing night inside. Suites from $166.

Ever been to Mesa Verde? What else would you recommend seeing while you’re there? And if you’re traveling around the national parks…