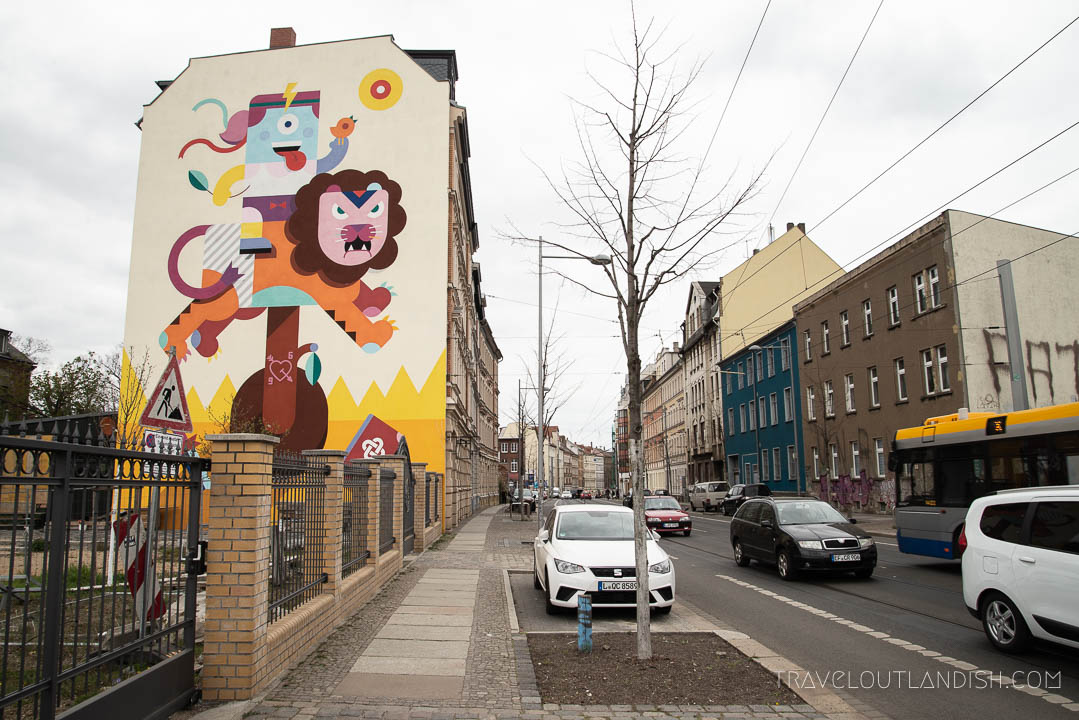 This post is on things to do in Leipzig was written in collaboration with Leipzig Tourism & Marketing, but all opinions are my own.

It’s hard to believe there’s a German city a city as cool Berlin, but Germans swear by a city just 190km away. It’s called Leipzig. Leipzig was also part of East Germany until the wall fell in 1989. The effects of being cut-off have had a tremendous impact on the culture of the cities left behind. The people who stuck around after the wall fell were the ones who loved their homes and the revolutionaries. They had the chance to essentially rebuild an abandoned city into whatever they wanted it to be.

Well, the verdict is in: Leipzig is so cool. After living in Berlin for two years, I found that Leipzig’s alternative scene really does rival that of Berlin. It’s smaller and friendlier to visitors, but also big enough that there are tons of cool things to do in Leipzig. It’s a little bit prettier with plenty of green and Baroque buildings. Pair that with a lower cost of living, less regulation, and less-developed industries than Berlin, it’s kind of a perfect place for artists and entrepreneurs just starting out. And as rent prices in Berlin go up, many people are looking for “the next Berlin”. But does Leipzig it really have what it takes?

Whether you’re loving Berlin and would never think to leave, are considering moving to an alternative to Berlin, or just want an out-of-the-ordinary stop on your Eurotrip, here are some of the reasons Leipzig is totally awesome.

Leipzig is quite green

While Leipzig is generally known to be gritty, it’s got an incredible number of parks and green spaces, too. The Green Ring Leipzig (CRL) is an urban cooperation between Leipzig and neighboring cities that ensures the whole region stays that way. 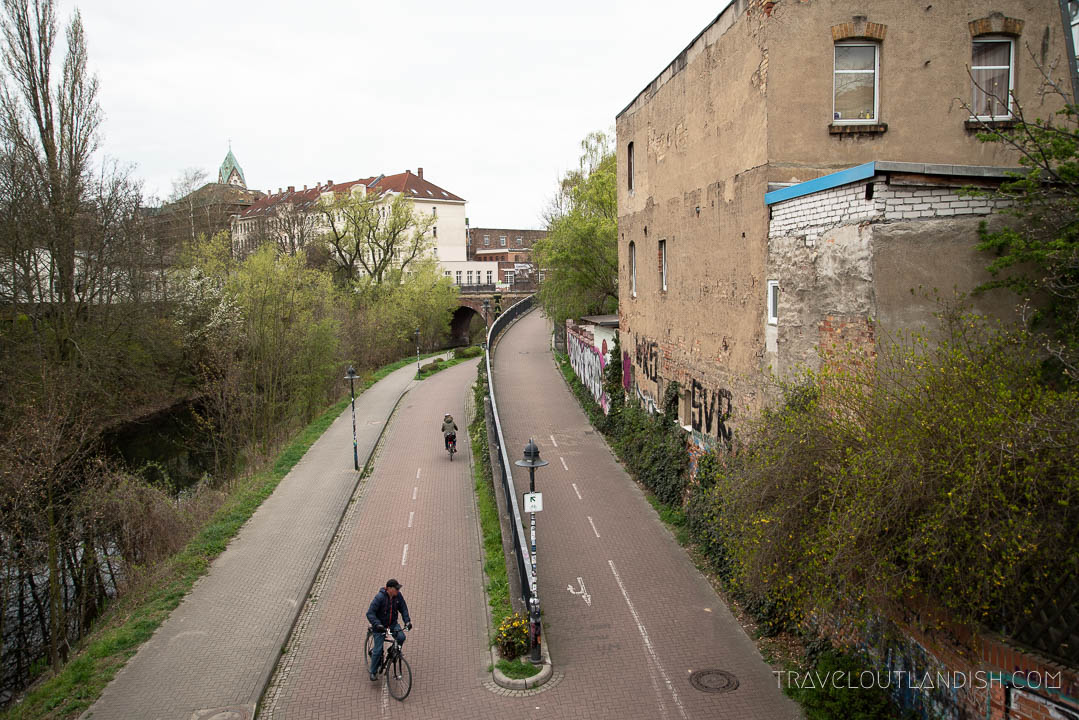 Within the city is the inner green ring, a 65 km cycle path that completely surrounds the city. It’s super easy to rent a bike through nextbike for the day and go anywhere the trail takes you. Another activity within the city (albeit best suited for summer) is to rent a canoe or book a tour (€50) and paddle along the Karl-Heine Kanal.

The outer green ring enables you to leave the city quite quickly on one of 165 km of bike cycle trails. Wander amongst trees in Elster- und Pleiße- Auewald, a nature preserve with streams for kayaking and miles of forest trails. See wildlife hailing from across Central Europe at the wild-style-zoo Wildpark Leipzig. And as is the way in landlocked places, head to the New Lake District on a hot summer day to take a dip in the lake; Cospudener See and Markkleeberger See are a couple of local favorites.

It’s pretty in other ways too (but not too pretty)

Leipzig has a rich history as a trading center. Much of the city was built throughout the 1700s to be grand-and-impressive to merchants and traders passing through. 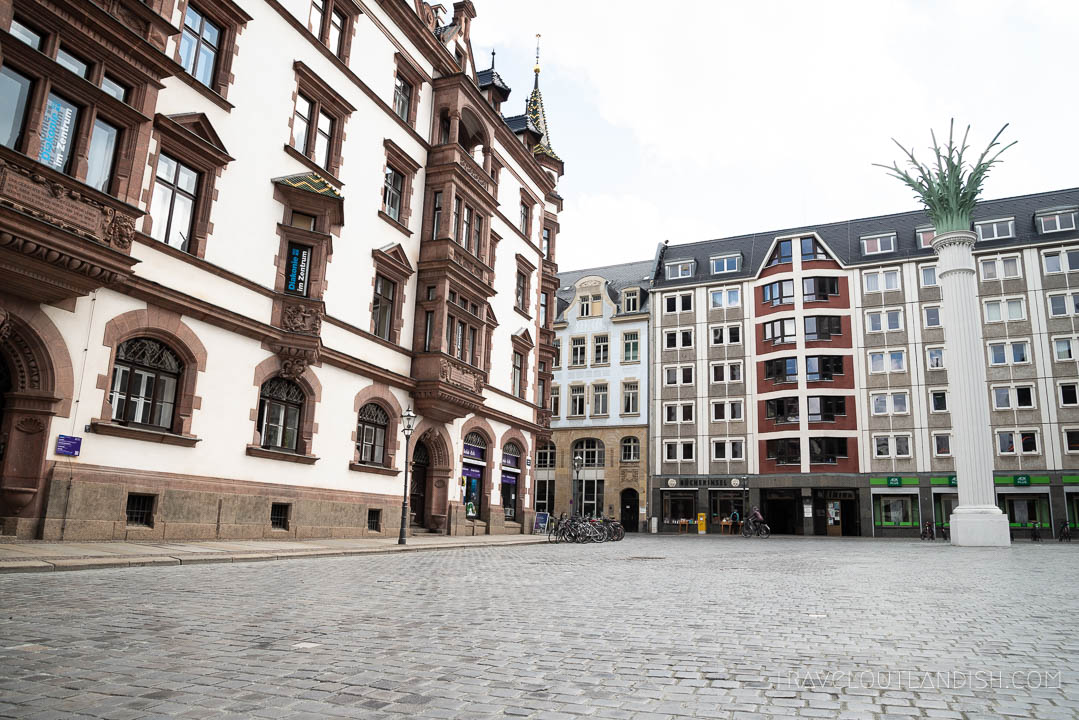 Even though much of the city center was destroyed during WWII (and run down further in GDR times), Leipzig is actually super beautiful compared to other parts of East Germany. You’ll find plenty of plazas and cathedrals in the city center if it’s a truly European experience you’re after. St. Thomas Church is something of a pilgrimage for musicians and the Markt square gives you a glimpse of Baroque, neo-Baroque, GDR-era, and modern architecture all in one place. 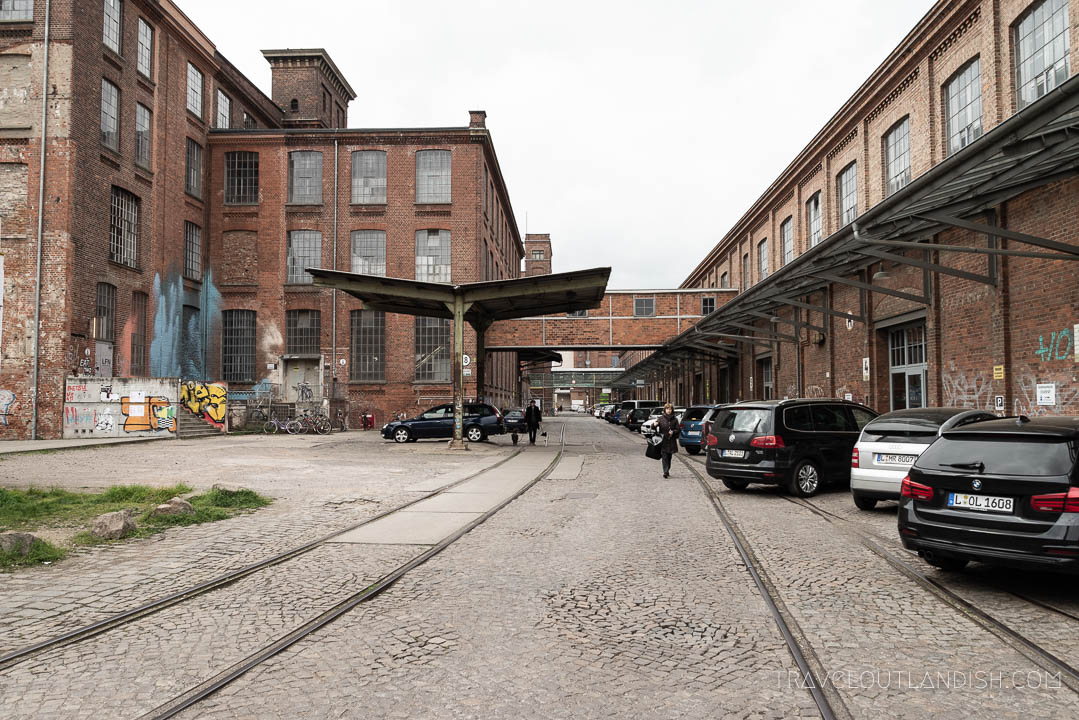 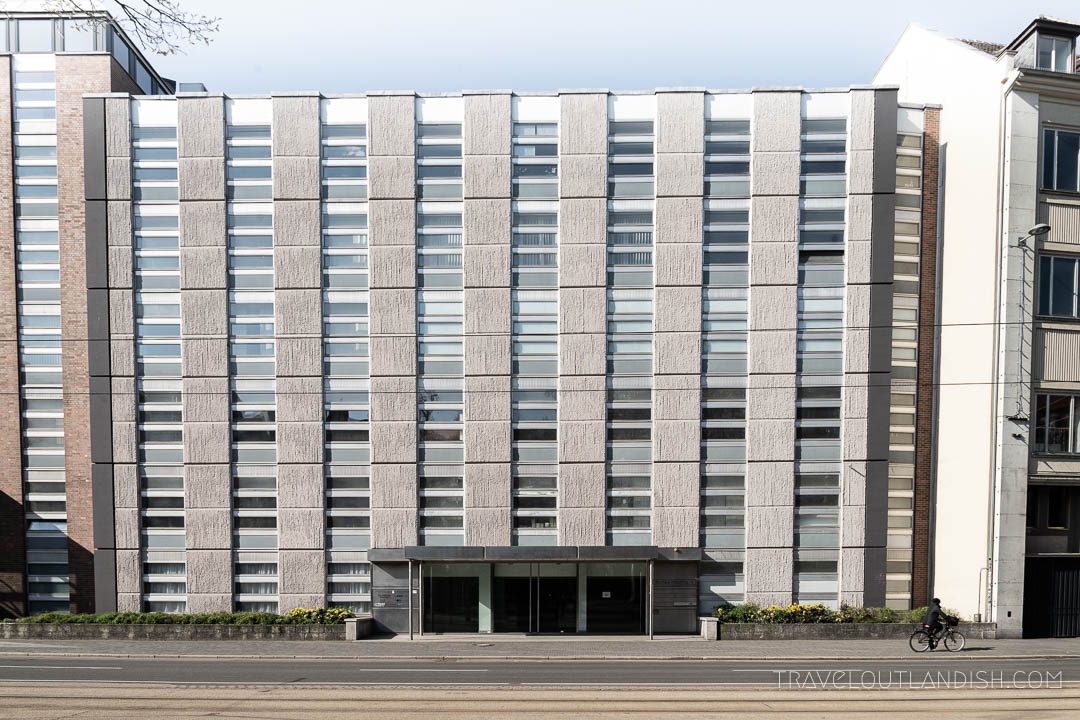 On the outskirts of town, you can find abandoned factories like the Spinnerei – a former cotton mill – or Soviet buildings restored and rebuilt as cultural centers.  Aesthetically, Leipzig has a mix of everything. You can most definitely find some city that you’ll find beautiful if you just know where to go.

The wall may have fallen in 1989, but Leipzig still is quite defined by its history. One of the major protests that led to the fall of the GDR started in Leipzig. Privatization meant that much of the former Eastern-Bloc went up for sale. Some of it was bought by opportunistic investors. Everything that wasn’t sold was abandoned and then squatted. People started tagging and making art as part of a revolution. Tons of people left, but the ones that didn’t were those who didn’t mind a little anarchy. It was cheap to live here and a little bit counter-cultural, which has always been the perfect bait for artists. Then more young people and students came. And all this happened in just the last 3 decades!

Some of the people who started the revolution are still living in Leipzig today. To the West, Plagwitz is still full of murals, factories-turned-galleries, and squatted apartment buildings. Connewitz is also cool to explore. It’s a less trendy and more anarchic part of Leipzig where you’ll find local shops, cheap bars, and tags everywhere.

Coming to Leipzig is almost a pilgrimage for musicians. It’s an incredible place for artists and historians and readers, too. But with such a short time to explore the city, I focused in on the alternative things to do in Leipzig. And there are a lot of them. 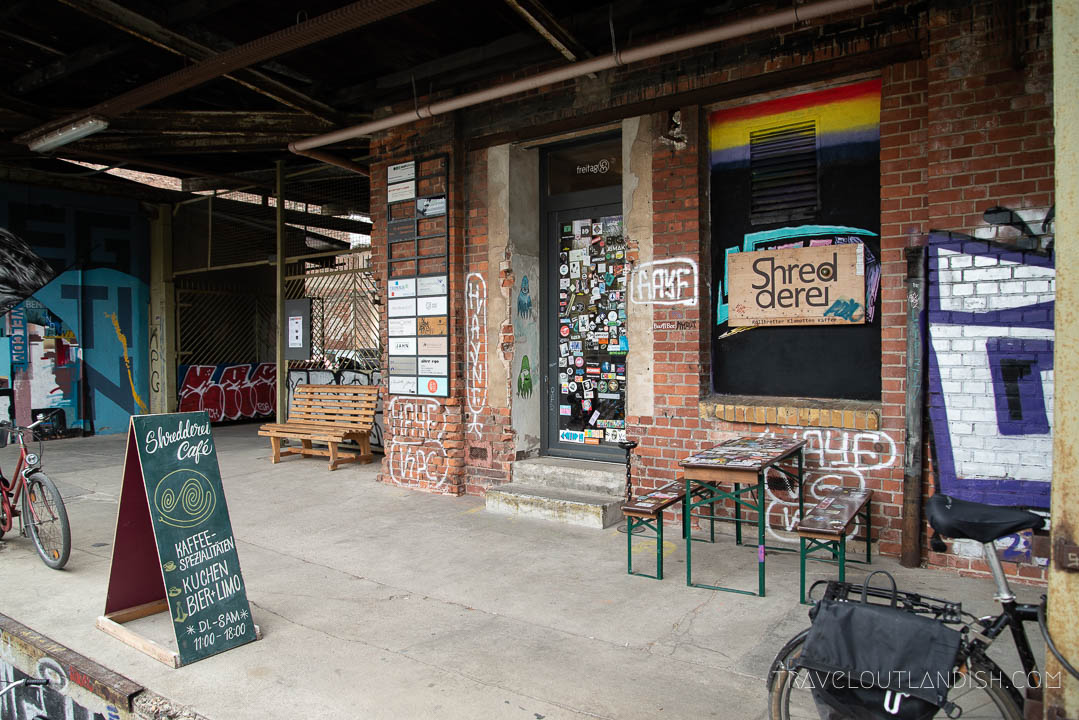 Basically, you’ve got the city center, and then everything else. Hidden Leipzig describes North of the center as a place where you can “slow down and experience nature”, the South as “Freedom and Paradise”, the East as “Spirit of Optimism and Calm Havens” and the West as “Water Visions and Industrial Culture”. If you want to experience the unique things to do in Leipzig, you’re best ditching the city center and heading to the South or the West instead.

The Best of the West: Canoeing the Karl-Heine-Canal // Hot Dog at Beard Brothers // Ice cream at Toni’s Eisladen // Spinnerei Galleries at Spinnerei // Kino at the Spinnerei // Dinner at Chinabrenner // Beer at Dr. Seltsam

Want to have a more in-depth experience with Leipzig? Explore Tours of Leipzig here.

The cultural scene is pretty incredible, too.

It seems that every space in Leipzig has a cultural purpose. It’s the city where Bach spent his final decades. Universität Leipzig sits in the center of the city and ensures a steady supply of young and educated citizens. Every space seems to double as a music venue or an artist studio, and don’t even get me started on all the museums and art galleries in Leipzig.

If it’s conventional museums you’re after, The Museum of Fine Arts and Gallery of Contemporary Art feature some of East Germany’s biggest artists. But perhaps more interestingly are the hundreds of unofficial galleries scattered across the city. Some of the best can be found on the street Eisenbahnstraße or at the Spinnerei that now serves as studios, gallery spaces, art shops, and artist housing. 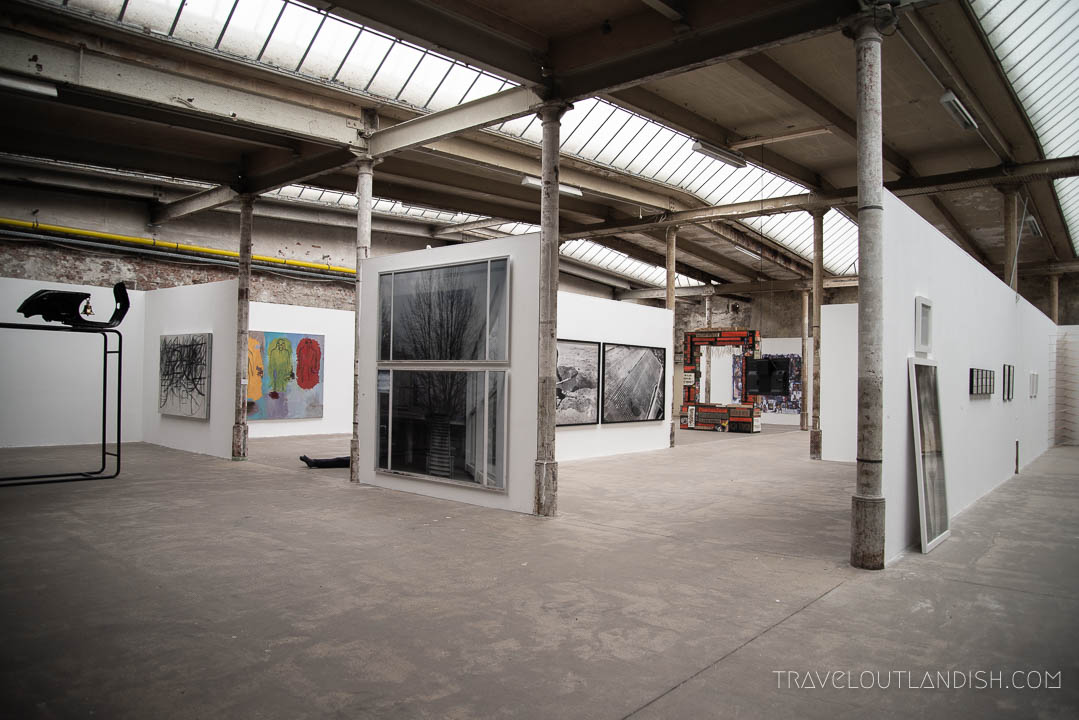 All this, and the cost of living is still quite low

Much like Berlin, Leipzig was a kind of a rough place to live before the wall fell. Tenants from GDR times tell stories of coal stoves, bad ventilation, and communal toilets shared with too many tenants. Many people got the hell out as soon as the wall fell,  and much of the city was left vacant. 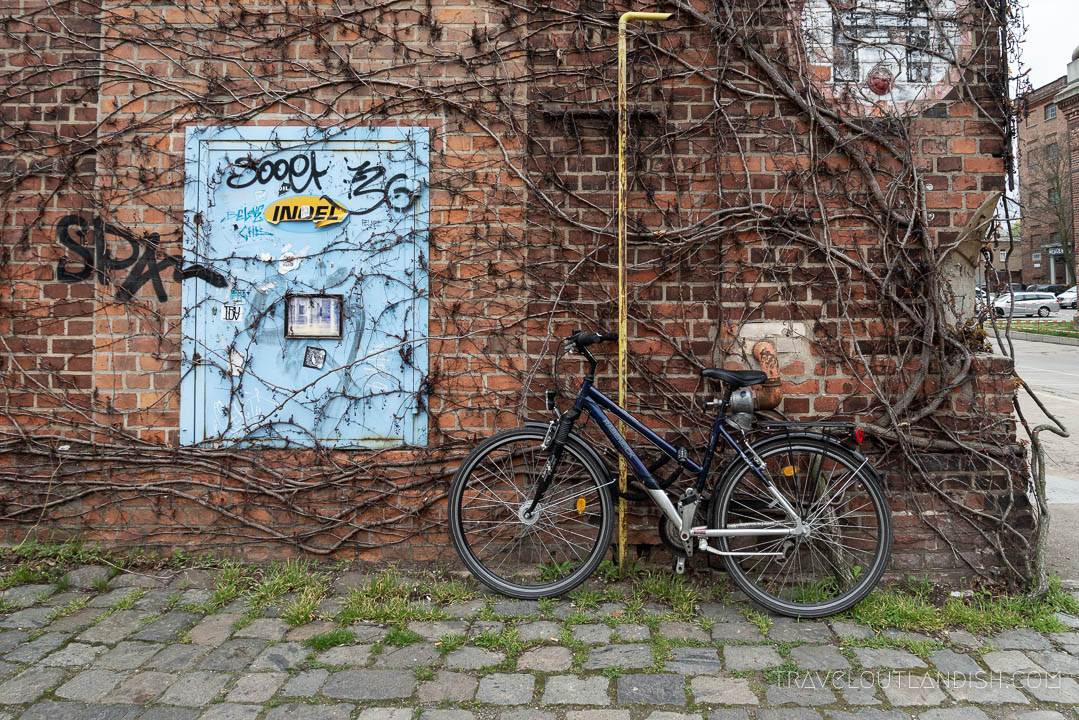 But the people who stayed reinvested in making the city livable again. Leipzig has since been transformed to what I would call conventionally-appealing. The population is expected to grow a ton over the next 10 years, but rent prices haven’t quite caught up yet. The city makes generous allowances for housing, workspace, or cultural projects looking to revitalize existing spaces resulting in low-cost spaces for artists, properties where people exchange renovation for tenancy, and tons of other alternative housing models. Prices for a one-bedroom apartment in desirable parts of town start for as low as €300 (why don’t we live there, again?). 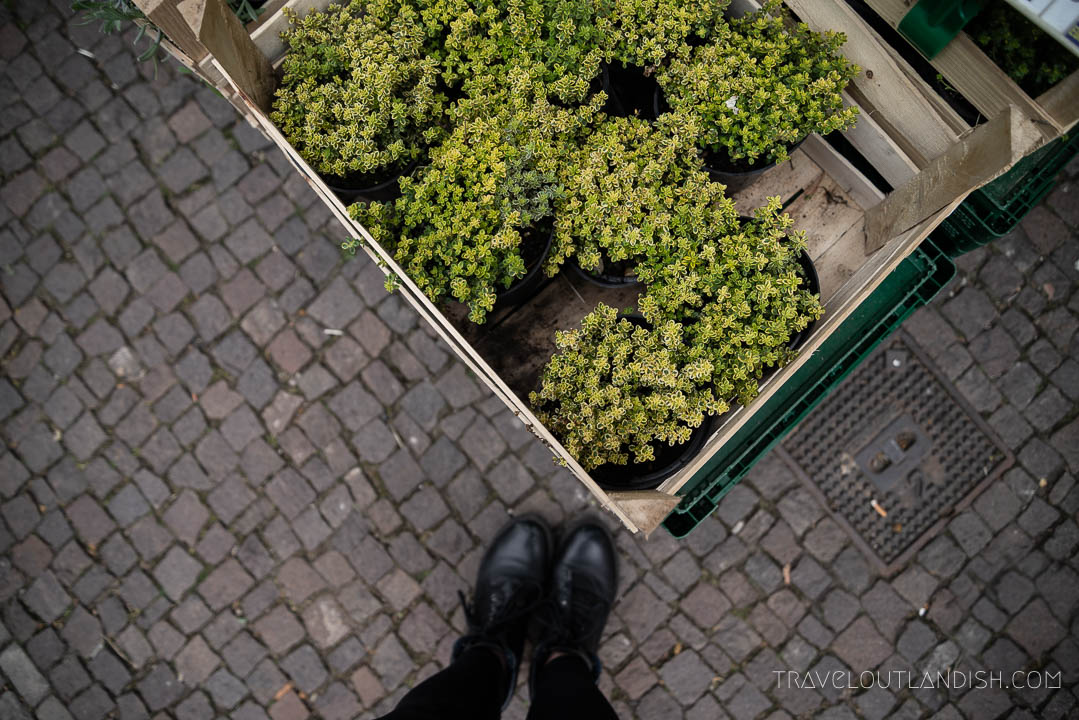 The low cost of living for locals is passed through for people who travel there. Everything from food to drink to activities are inexpensive by European standards. You can grab a hostel bed from €20 per night or a sit-down dinner for less than €10. Awesome, right?

So, I guess you should go BEFORE it becomes “the next Berlin”

I’m generally averse to these impending motivations to go somewhere, but in the case of Leipzig, the chances of it becoming “the next Berlin” are pretty promising. Berlin has evolved SO MUCH just in the two years I’ve lived here. Silicon Allee is a leading tech hub in Europe. Berlin is so international that you’re just as likely to have an Australian barista or Turkish barber as a German one. There’s an ever inflating cost of living, an impending housing shortage, and lots of the usual disaster that comes with gentrification. Berlin used to be saved for artists and activists. It’s still edgy and awesome, but it is becoming harder for creatives to make it here. 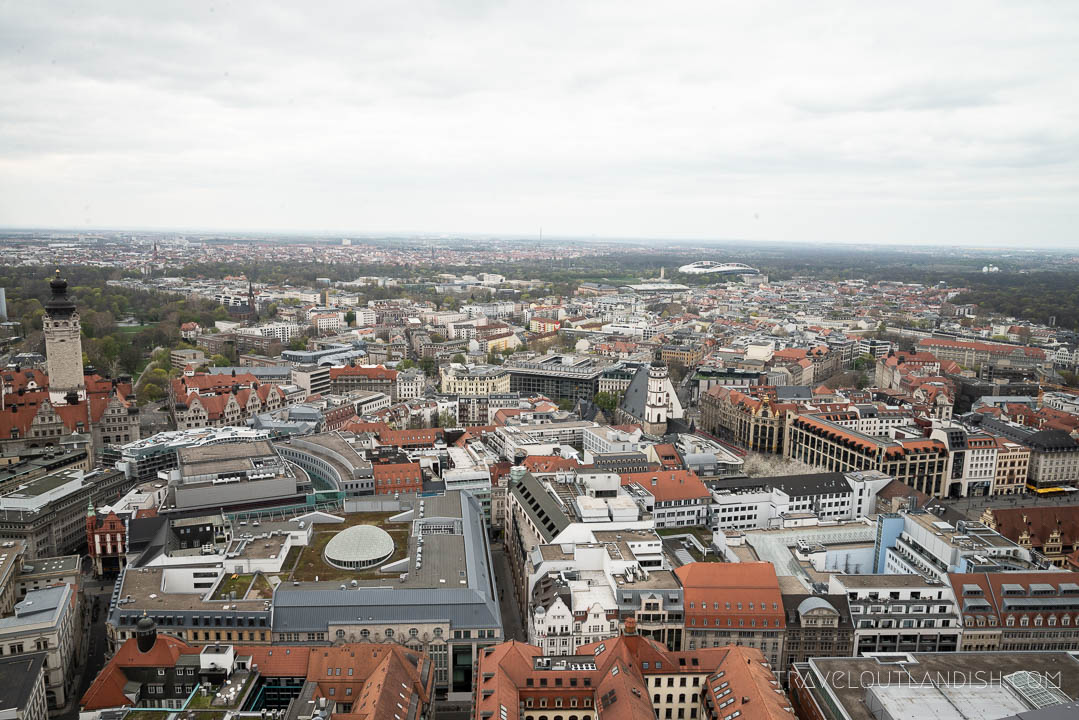 I’ll lay it out straight. Berlin is one of my favorite cities in the world, but that’s because it’s so damn unconventional. It’s a big messy mix of cultures, interests, and experiences. It’s incredible. I don’t know if you can really call Leipzig “the next Berlin”, because Berlin is JUST Berlin, but if you’re looking for a place to move or travel where you’ll be ahead of the trend, Leipzig is totally the next spot in Germany.

How to get to Leipzig

There’s an airport in Leipzig, but you can save time and money by traveling by bus or train within Germany. It’s just 190km and 1.5-2.5 hours from Berlin to Leipzig with bus tickets starting at €8 and train tickets going from €30. Compare routes on Omio. 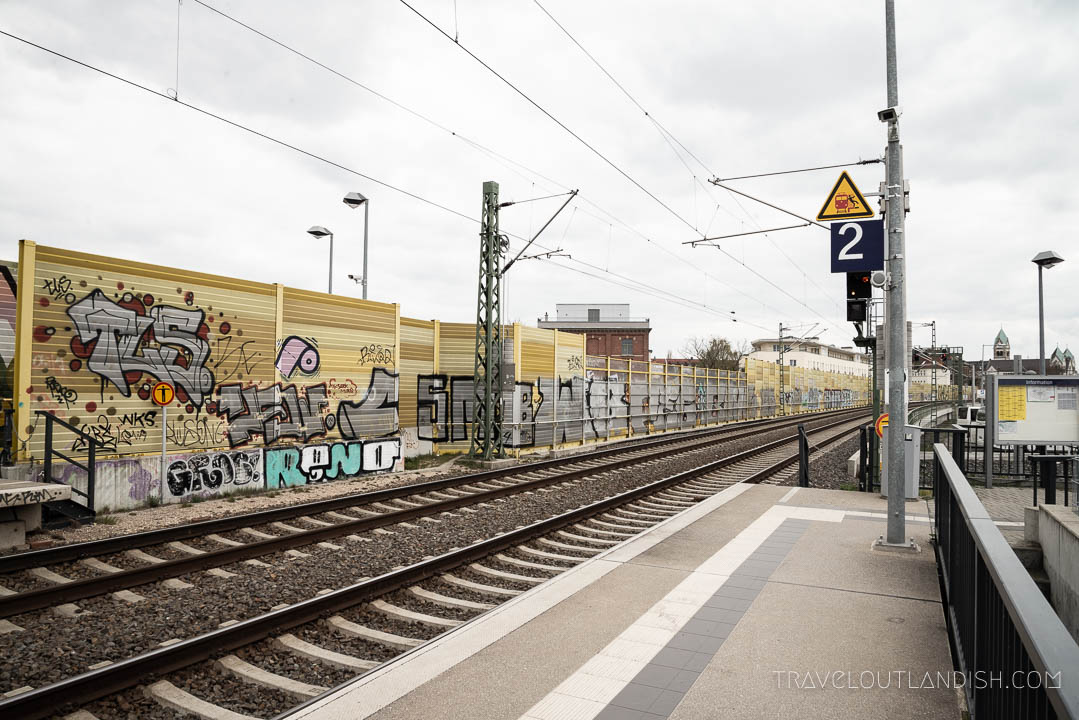 Where to Stay in Leipzig

Looking to stay strange during your trip? Check out these alternative accommodations in Leipzig.

Meisterzimmer | The Meisterzimmer apartments are some of only a few apartments in the old Spinnerei. Inside, you’ll find industrial kitsch and artist loft rolled into one. The rooms are enormous and furnished with artifacts from when the Spinnerei was a cotton mill. Very cool and worth the splurge! Double rooms start from €100. 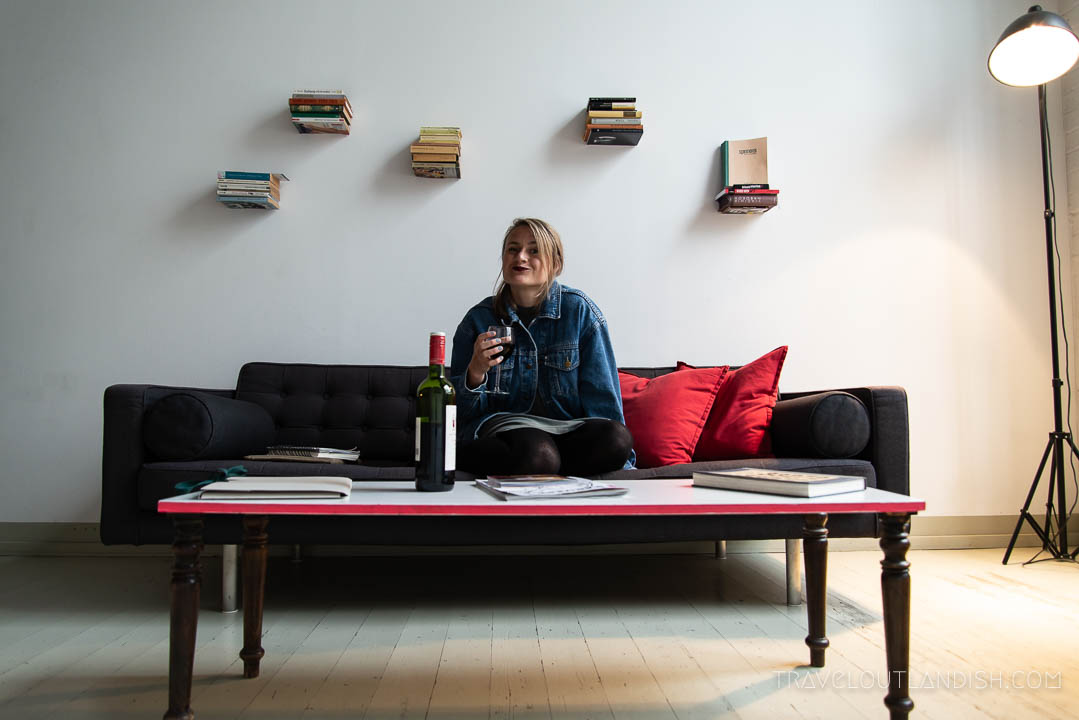 Hotel Paris Syndrom | Paris Syndrome is described as a phenomenon amongst tourists who go into extreme shock upon realizing Paris is different than their lifetime of high expectations. Genuine condition or not, Hotel Paris Syndrom is a living work of art in Leipzig where you can dip your toes into Parisian style and see what happens. The hotel is attached to the Gallery of Contemporary Art.  Double rooms start from $96.

Airbnb | Leipzig has plenty of homes with doors open to guests. Find a neighborhood outside of the city center and get a taste of alternative German life in Leipzig. New to Airbnb? Get $40 off your first stay.

Thanks again to Leipzig Tourism & Marketing for showing me around their city! Have any questions about where to stay, what to see, or things to do in Leipzig? Ask away. 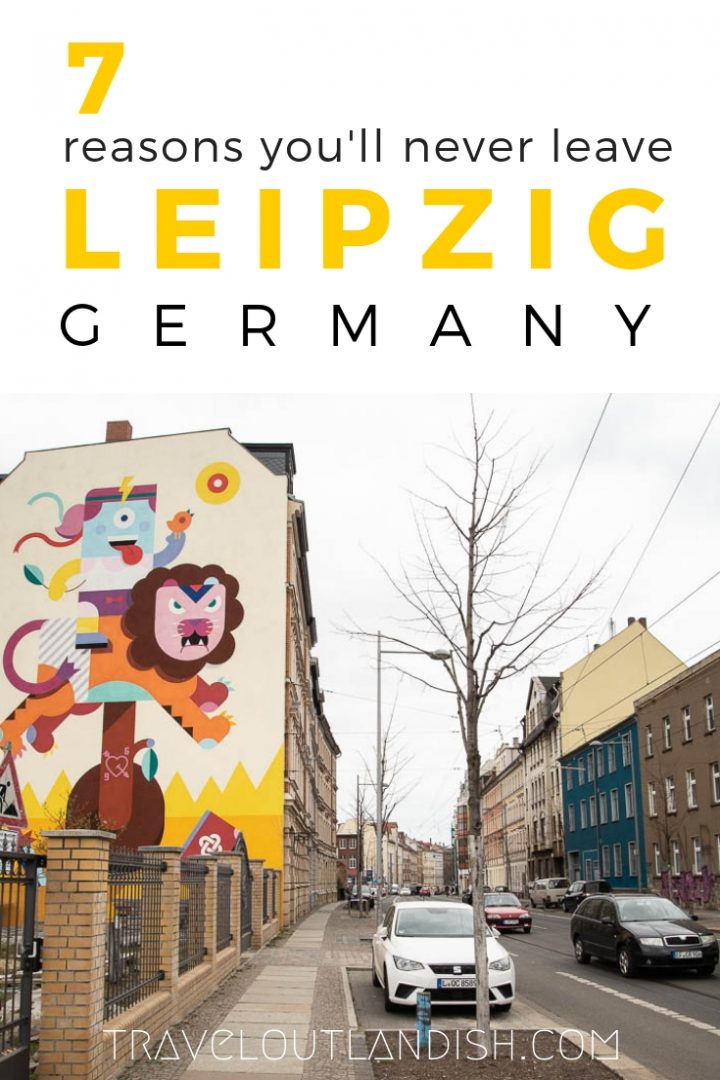