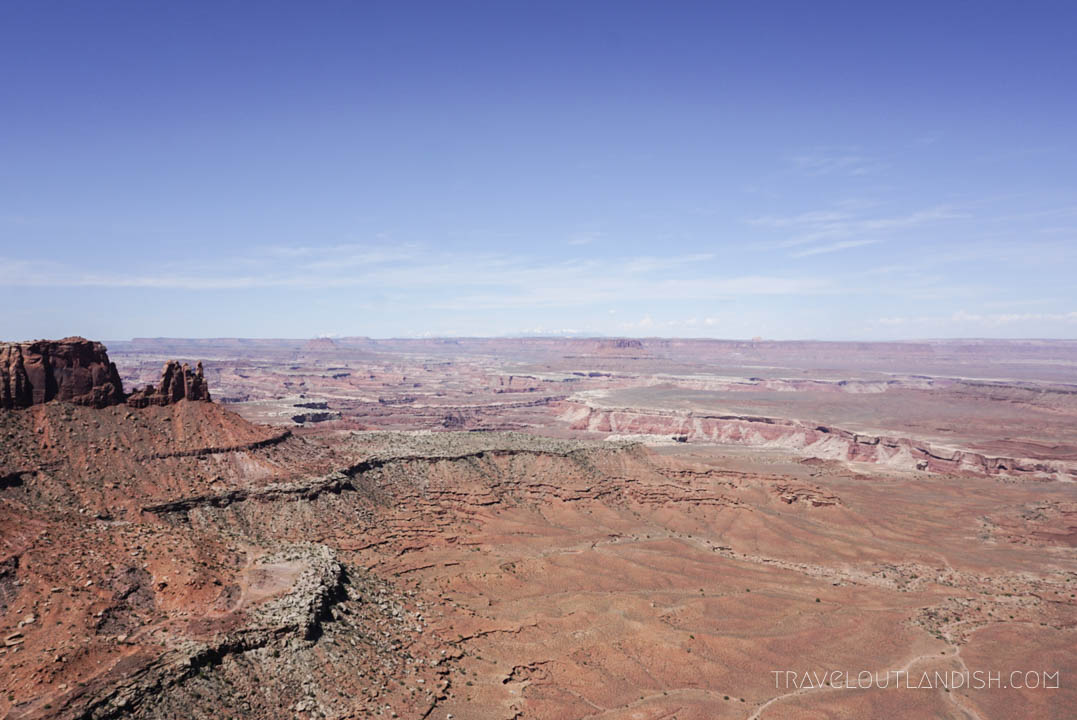 The Rivers is where the Colorado and the Green River meet, forming a lush oasis in the otherwise dry desert. The Needles is an area that looks like the forgotten factories of giants. The Maze is a place where few dare to go for fear of getting lost amidst the complex canyons. And the Island in the Sky? Well, that kind speaks for itself. These are the four distinct districts, and the names just hint at how awesome Canyonlands National Park really is.

With sandstone hoodoos and an intricate network of canyons, Canyonlands is like four parks in one. It was hands down my favorite park on our Southwestern road trip because of how it rewards those who are willing to tough it out. The park promises adventure to those who will carry their own water, who will camp in the unpredictable desert, and who follow rock cairns across slick rock fields. It is rugged, remote, and absolutely awesome.

Ready to experience Canyonlands National Park for yourself? Here’s a complete guide including things to do, hiking trails, how to get there, permit info, and campsite recommendations.

Canyonlands is a protected area spanning 337,598 acres in Southwestern Utah, just outside of Moab. Despite its proximity to town, it’s relatively inaccessible (hint: that means it’s still uncrowded and very awesome). For some perspective, Canyonlands got just under 800,000 visitors in 2017. Zion gets close to 4.5 million and the Grand Canyon gets over 5 million each year.

When to visit: Since Canyonlands is high desert, you’re best avoiding the extremely hot summer when it gets up to 100°F or the winter when temperatures dip below 24°F. The best time to visit Canyonlands is spring and fall where temperatures are most moderate. If you want to avoid the crowds, try for early spring or late fall. You might experience some limited trail or road openings, but the isolation is worth it.

No two Utah parks are the same, but Canyonlands definitely has its own thing going on. There are so many cool things to do in Canyonlands National Park, but here are a few of my favorites.

Because Canyonlands is rugged and uncrowded, backpacking feels like a genuine adventure. The Needles is the most popular district for backpacking in Canyonlands with routes like the Chesler Park Loop and Squaw Flat and Big Spring Canyon. You can also combine many of the backpacking trails in The Needles for a longer trip. For example, our ~24km loop included Chesler Park, the Joint Trail, and Devil’s Pocket.

Most routes in the Needles District aren’t overly difficult, but scarce water is a limiting factor both on how far you can travel and for how many days. Another important challenge is that all the trails are primitive and marked with cairns. You’ll definitely need a topographical map and a sense of where you’re headed before taking off on your backpacking trip.

Backpacking permits are required for all overnight trips, and you’ll need to reserve up to four months in advance if you’re traveling in high season.

Grand View Point is the most celebrated viewpoint in Canyonlands for the panoramic views. But if you’re willing to walk just 6km (roundtrip), you can both shake off some of the crowds and set up camp for the night at Murphy Point.

Camping at Murphy Point is unique in that you’re able to actually camp out on the canyon rim. It’s a backpacking site (rather than a car camping site) and still one of the best-kept secrets in Utah. You can reserve a permit here.

Nearby Moab is one of America’s adventure capitals, and the town has the adventure vehicles to prove it. You can rent 4×4 jeeps and ATVs from about $250-$300 per day and set off on one of the many rugged roads in Canyonlands and surrounds.

One of the best offroad routes in Canyonlands is White Rim Road in Island in the Sky. The 160km road usually takes 2-3 days and loops around the mesa top and below. In the Needles District, the Colorado River Overlook, Horse Canyon or Peekaboo, and Elephant Hill are also well-reviewed offroad routes. Check in advance to make sure you’re up for the difficulty and to see whether vehicle campsites are available on the trail you select.

Canyonlands hiking and backpacking is very much defined by two things: heat and water. That said, a well-planned backpacking trip is easily one of the best things to do in Canyonlands. Here are a couple of my favorite routes in the park.

Note: The best backpacking can be found in Island in the Sky, The Needles, and the Maze District, but The Maze is notoriously dangerous for hikers. It’s appropriately named as it’s mostly trail-less, incredibly remote, and often described as a labyrinth. Unless you’re very experienced, keep your Canyonlands hiking to the other districts.

Lathrop Canyon Trail is a 17km hike located in the Island in the Sky District of Canyonlands. While the trail starts out on a flat, sandy trail, the beauty begins once you reach the rim and start getting canyon views. While this trail loops back, you can combine it with the Colorado River Trail and make a backpacking trip out of it.

Like all hikes in Canyonlands, there’s limited shade and it can get extremely hot. Start early and bring adequate water.

Chesler Park Loop Trail is among the best hikes in Canyonlands. You can knock the 16km trail out in one long day, or stay overnight in one of the absolutely awesome backcountry campsites at Chesler Park.

The Chesler Park Loop is in the Needles District. It begins from the Elephant Hill Trailhead and follows that until the trail splits into the Chesler Park Trail. It’s a brilliant walk through some of the best scenery in the Needles and though there’s no true summit, the tall grass and spectacular formations of Chesler Park more than makeup for it. It gets HOT mid-day, so be sure to start early, especially if you’re planning on making this a long day hike. If you’ve got the time for an overnight (make time!) grab your backpacking permit here.

Read More: A Get Outside Guide to Backpacking the Needles

HOW TO GET TO CANYONLANDS

Unfortunately, the only way to really get to Canyonlands is by private vehicle. Greyhound and Salt Lake Express run regular buses from Salt Lake City to Moab, but you’d still need to rent a car to take you the rest of the way. Your other option is to book a tour that includes transport.

Note: There are four main park entrances at Canyonlands. None of them are close together and there are no roads between them. The two entrances that are easily accessible are Island in the Sky (about 1 hour from Moab) and The Needles (about 2 hours), both of which have a visitor center. The other two – the entrance to The Maze and Horseshoe Canyon – are only accessible with a 4WD vehicle and take 2-3 hours to get to. The park recommends that you use their maps rather than GPS to avoid getting lost. View Canyonlands Maps here.

GETTING AROUND THE PARK

It’s also pretty impossible to get around Canyonlands National Park without a private vehicle. If you’re traveling without one, your only choice is to rent one or book a tour.

While Canyonlands itself is hard to reach, it’s proximity to Moab, Dead Horse Point State Park, and Arches National Park means you’ve got a pretty incredible range of accommodation options. Here are a few of the stays I’d recommend.

The Needles | The Needles | Squaw Flat is a 26-site campground just a short drive from the Needles Visitor Center and tons of other trailheads. The campsties are super remote in a beautiful setting, and you’ll have access to water and flush toilets. Each site has its own firepit and picnic table. Some sites are walkup while others are reservable. Sites from $20 per night.

Willow Flat | Island in the Sky | Willow Flat is a 12 site campground, all first-come-first-served. It’s nearby the Green River Overlook and each site has its own picnic table, covered awning, and firepit. There is no toilet and drinking water is only available at the Visitor Center spring through fall. Sites from $15 per night.

Kayenta & Wingate Campgrounds | Dead Horse Point State Park | Just a few kilometers north of Island in the Sky, Dead Horse Point State Park also has some really nice campgrounds. Kayenta is a peaceful 21 site campground with awnings, picnic tables, and fire pits. Wingate is a bit bigger with 21 RV sites, 11 hike-in only sites, and 4 yurts. The campsites are equipped with the same, while the yurts are more fully serviced with bunk beds, tables, and a BBQ pit. Tent sites from $35 and yurts from $140.

Under Canvas Moab | Moab | Glamping? Sign me up. Under Canvas offers both luxury and simple tents, either of which are a permanent structure on a 40 acre plot of land. Go for the luxury tent if you want an in-unit shower and private deck. Suites from about $200.

Red Cliffs Lodge | Moab | If you’re eager to get the dirt off of you at the end of the day, the best spot in town to do it is the Red Cliffs Lodge. The hotel sites along the Colorado River just 15 miles from Arches National Park. Each suite has a private patio and even if the Western decor doesn’t do it for you, the setting will. Suites from $170.

Have any questions about hiking, camping, or things to do in Canyonlands? Ask in the comments below.