On the River of Life + Death in Varanasi | India 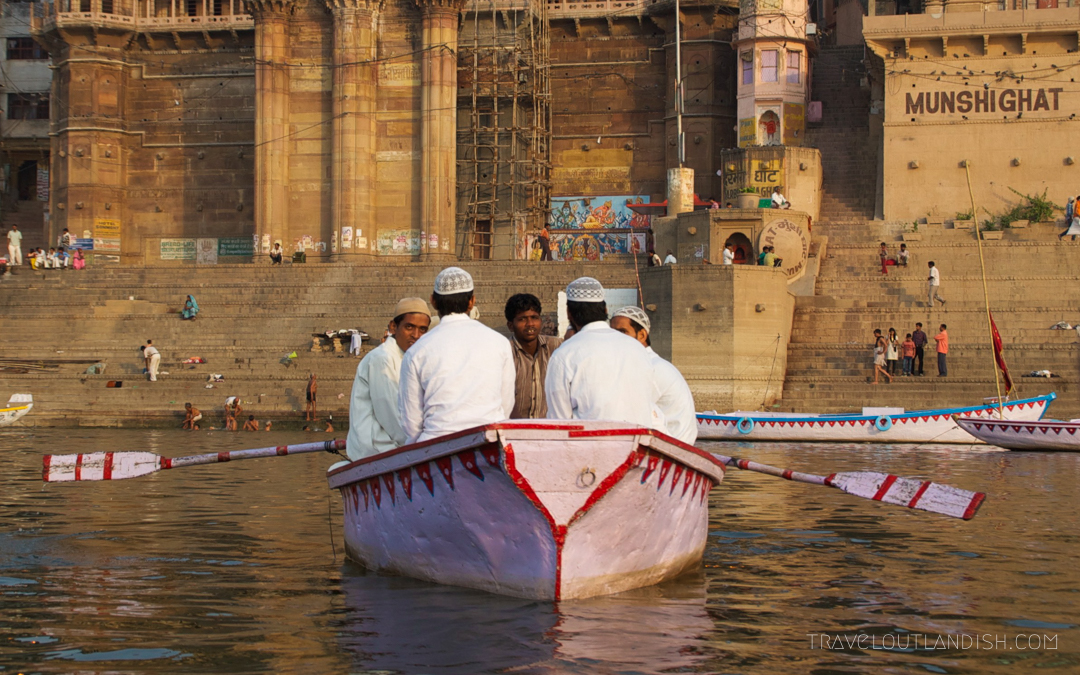 At the Ganges — the holiest of places to be buried as a Hindu — life and death mingle freely on the river banks. Within the currents of the world’s sixth most contaminated river flows purity, and you’d never really know these allegations of filth if you were just to glimpse at the thousands of people bathing on the Ganges’ shores each morning.

Let me start by saying the India Tourism Board was spot on when they went for the tagline #IncredibleIndia. As with most of India, I found Varanasi to be definitively “incredible”.  In fact, Varanasi may be the only place I’ve ever been where it doesn’t feel cheap to use a word like “awe-striking” to describe it, because, really? For good and for bad, it was awe striking.

You see, backpacking through India, I awaited Varanasi with the kind of giddy excitement that only 10 years of hype can build. At 13, a VHS documentary of the burning ghats piqued my unrefined curiosity. I recall watching death burn away into ash, and before I even knew how much I wanted to travel the world, I at least knew I was intrigued by that.

Some 10 years later, we arrived into Varanasi Junction after another too-long train journey. We pushed through traffic, and through town seeking the water front. Looking out across the ghats and the ebbing Ganges River speckled with pastel-painted boats, as the sun climbed and cows meandered, this place was every bit as strange and spectacular as my 13-year-old self could have hoped. Partially dressed bathers bathed, soaped-up children shrieked, and the oft photographed holy men roamed, while emaciated dogs scavenged, and waist-high heaps of garbage grew. Off in the distance, carefully decorated corpses burned away. 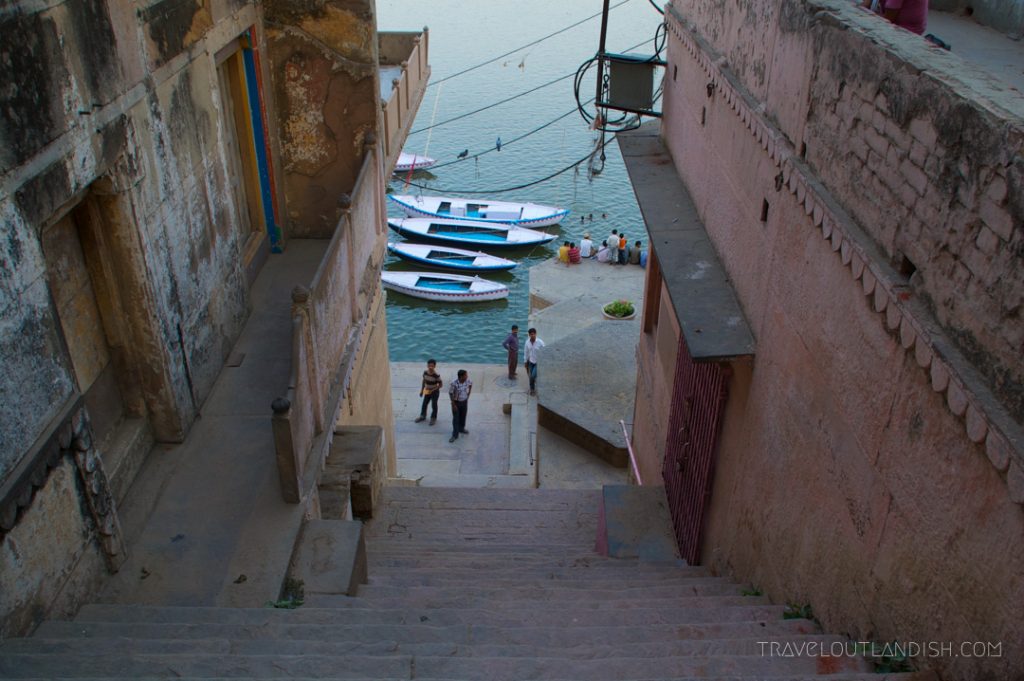 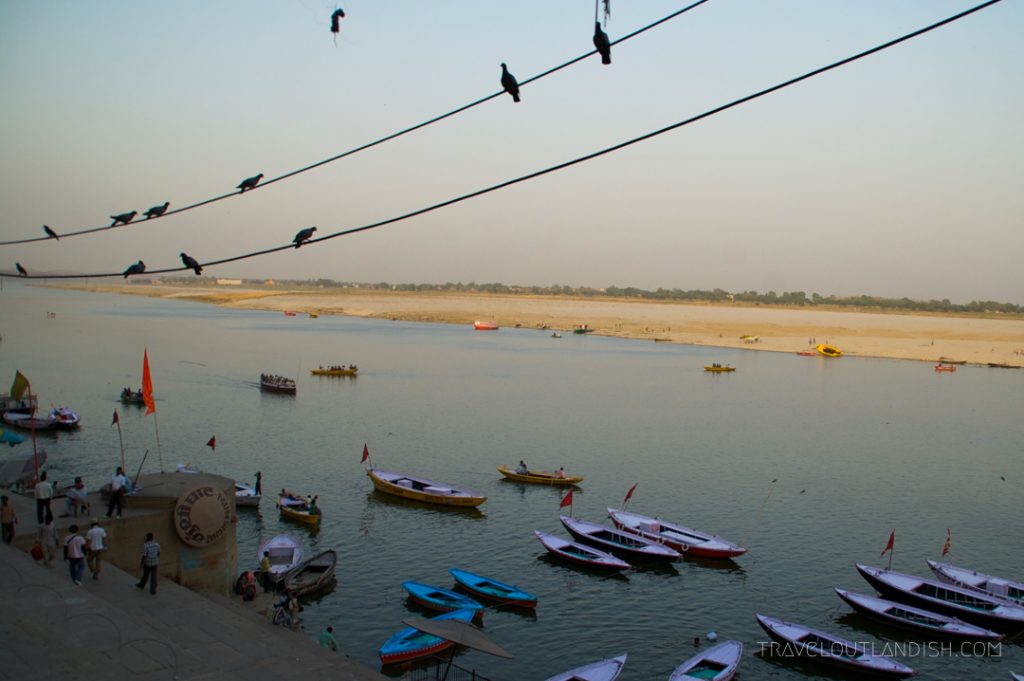 It is the kind of place where, as a traveler, you must put your respectfulness before your camera lens as to not turn private moments into show. If done right, Varanasi is a visceral experience that you can hardly process until your train pulls away — I’d say it was every bit as incredible as #IncredibleIndia makes it sound, but you don’t have to take my word for it! Are you thinking about visiting Varanasi? Here’s how to do it:

where in the world is Varanasi, India?

Varanasi sits on Eastern side of Uttar Pradesh, a province in Northern India. Located in the Ganga Valley, Varanasi has earned significance because of its connection with the Ganges River. 1,569 miles in length, the Ganges River runs between India and Bangladesh, and empties into the Bay of Bengal. 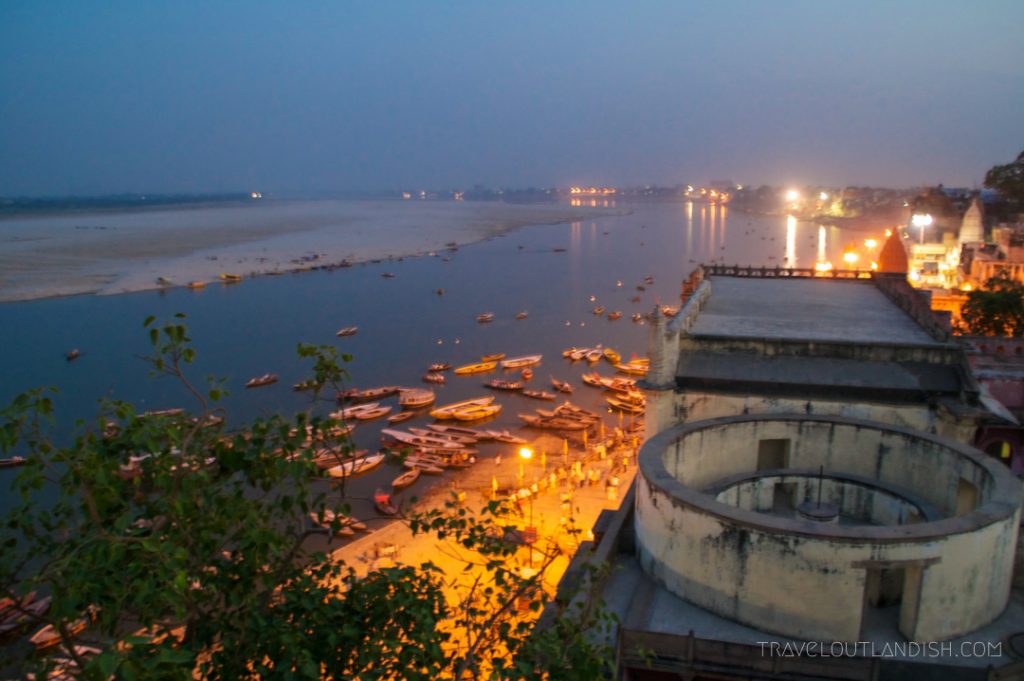 when should I visit Varanasi?

Varanasi is one city that I can confidently call “hot as Hell” without having personally experienced the climate of Hell. Times of year to avoid? April through June are the hottest months, and June through October bring the monsoon rains (and all the smell and muck that comes with it). We’d recommend visiting between October and March if you have the flexibility to do so. As always, if you’re on a fixed schedule, just make the trip happen whenever you can! You won’t want to miss Varanasi for weather factors alone.

the people you’ll meet at Varanasi:

You’ll meet people on pilgrimage, satisfied that their long journey has reached its end. You’ll meet brothers honoring their father’s death, and women pleading not for food, but for wood so they can provide the proper burial for aging husbands. Alongside the waters sit men clothed in white cloths, wading waist deep into the Ganges. Small boys will swim laps across the river’s width while elegantly clad mothers with tightly braided hair splash their faces with the holy water, taking in mouthfuls of contaminate without fear. 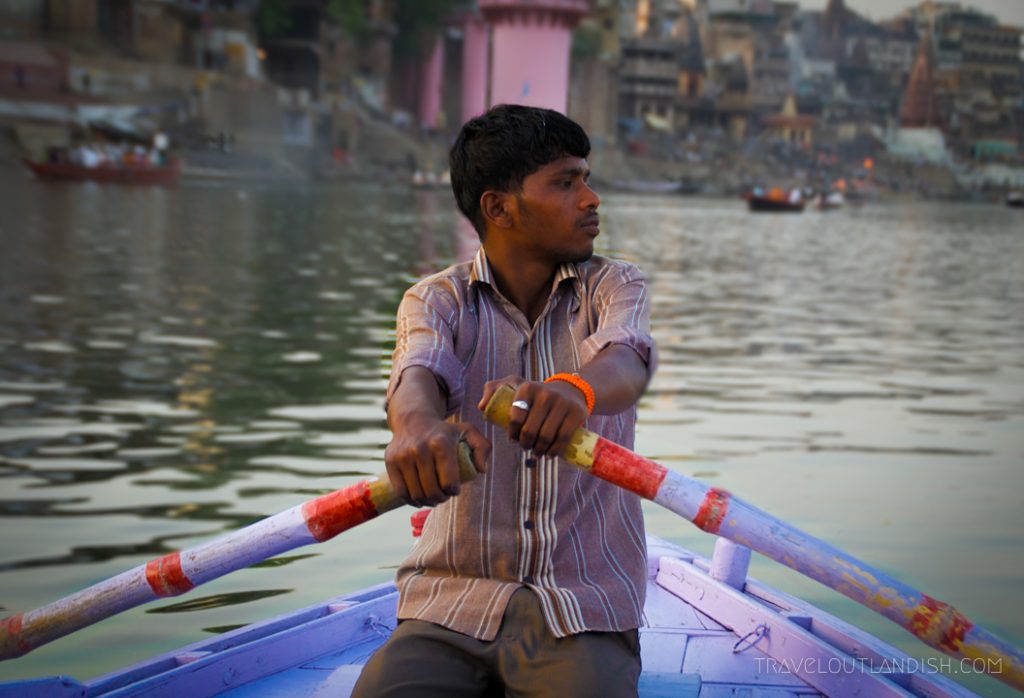 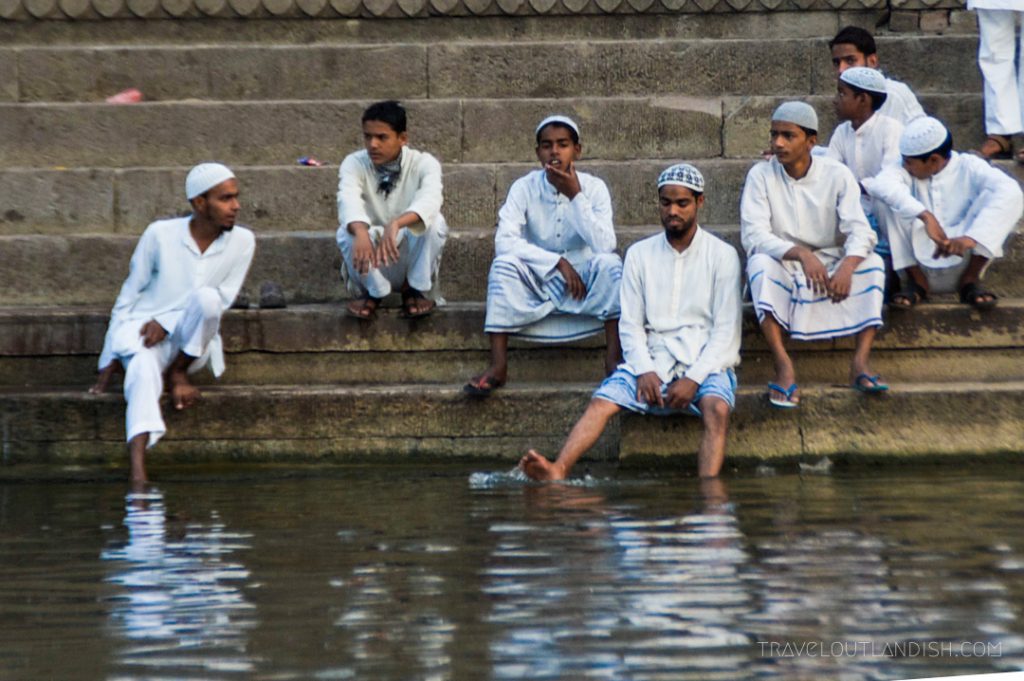 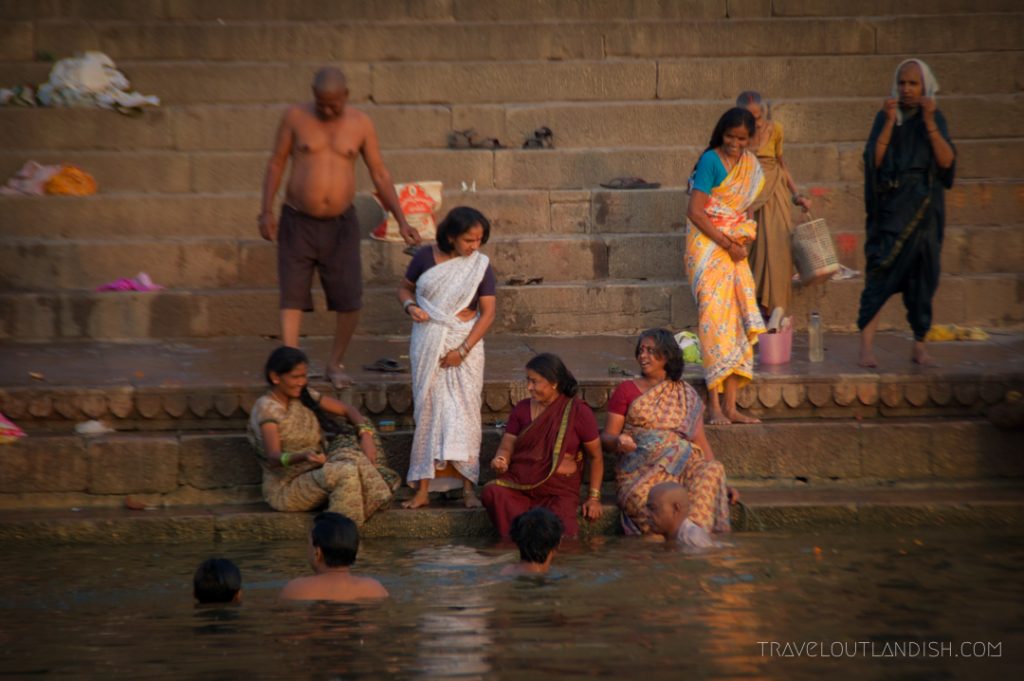 Oh, we almost forgot. You’ll also meet all kinds of hippies that discovered the weed laced-lassis and cheap yoga twenty-some years ago, and have stuck around to live out their years here. And, well… why not?

how life-changing are we talking?

Some people leave Varanasi feeling shaken, but for for me, it was a 10 out of 10. Simultaneously afflicted with tragedy and hope, Varanasi will allow you to question your own views on religion and poverty, and also to experience the full cycle of life over the course of a day. The town itself is a lovely place, and for the open-minded and curious, it’s one of the most incredible cultural and spiritual experiences.

In the streets of Varanasi, sandalwood smoke churns through humid air and the smell of stale urine never seems to fade as you dip through craggy alleyways, kicking up piles of red powder left behind from Holi. Bellowing chants of holy men and the ‘ting’ of their bells toll alongside the ghats in a rhythmic yet erratic fashion, providing the soundtrack for this curious place. 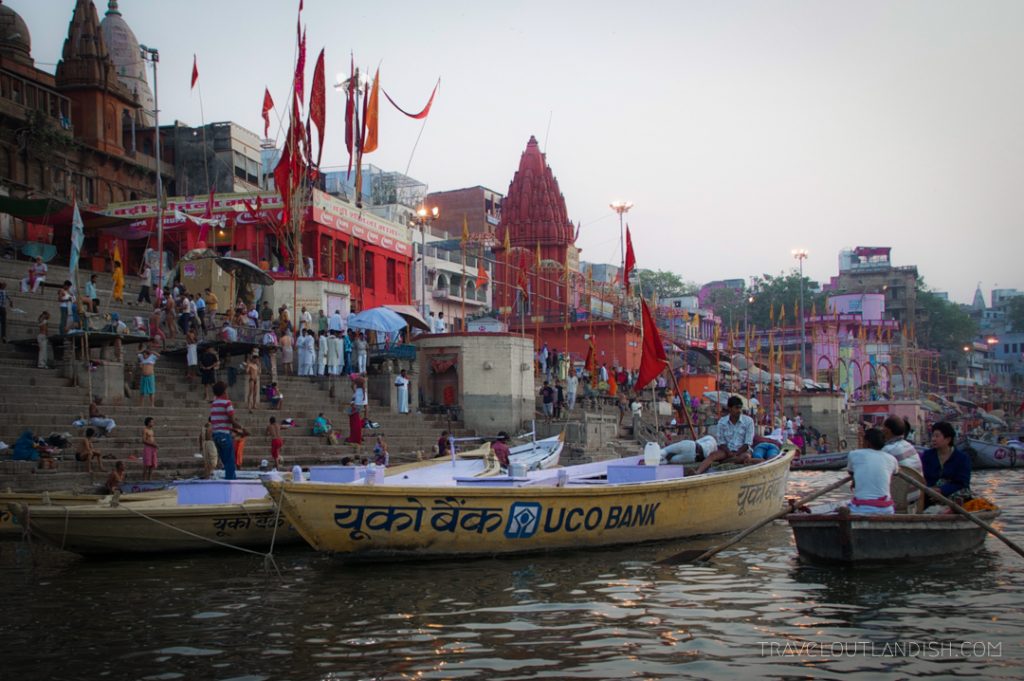 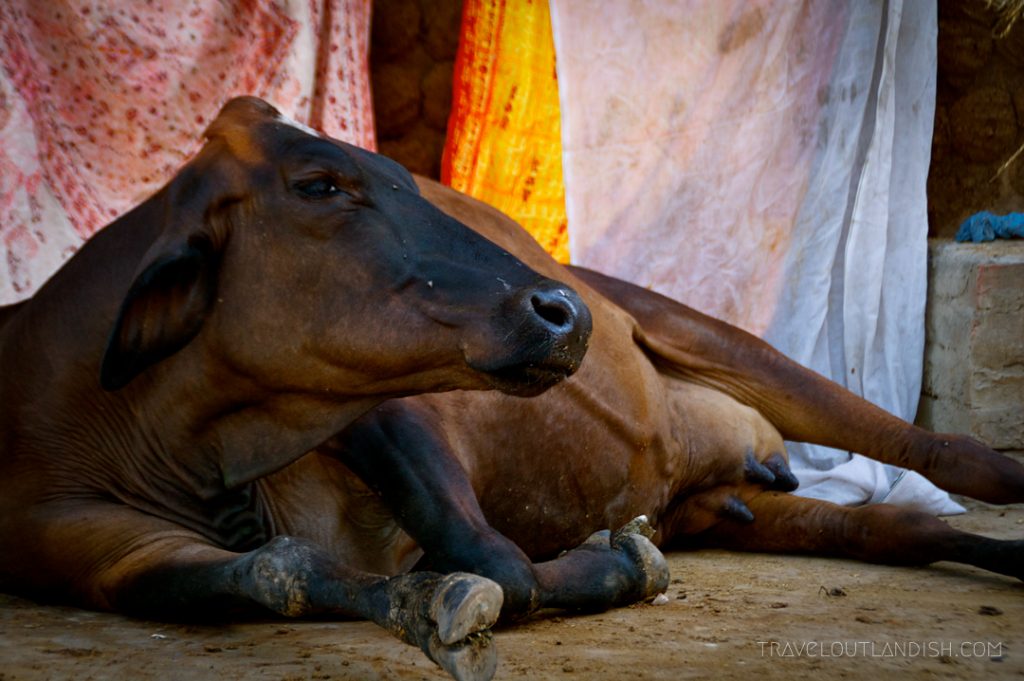 The city is most famed for its location along the Ganges River, and particularly its bathing and burning ghats. So what exactly are these “ghats”? A flight of steps leading down to the river, to put it simply. Varanasi has 87 ghats along the Ganges River, most of which are used for bathing and ceremony with a few reserved for cremation. While some are privately owned, most are made use of by hundreds of people each day, as they bathe, launder, or cool off from the heat.

The most popular tourist activity is hiring a row boat (there are hundreds available) to float the river at sunrise or sunset — this is when you can experience the full ritual of the river with banana leaf floating lanterns, and the nightly Aarti ceremony. Otherwise, it’s a fun little town full of bakeries, yoga studios, shops, temples, and markets, because let’s be honest — how much time can you really spend on a row boat? 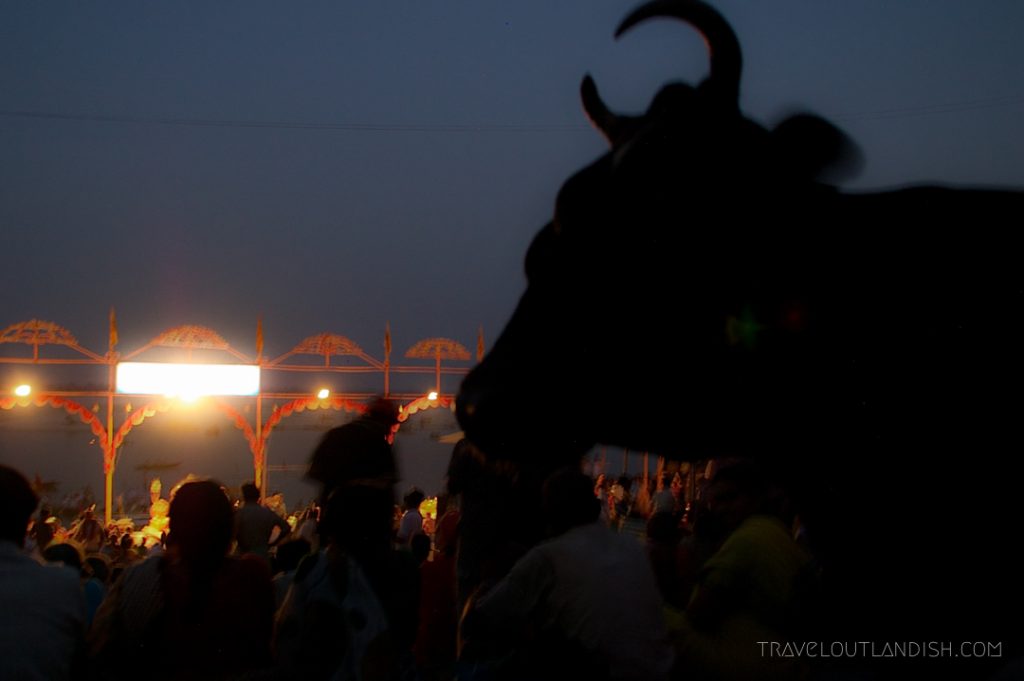 The Burning Ghats of Varanasi

Perhaps you’re curious to learn more about how you can see the burning ghats. Pinky swear you’ll be polite and won’t take pictures?

The Marikarnika & Harischandra Ghats are the official burning ghats at Varanasi. You can get here by boat or on foot. If you do choose to visit these ghats, be sure to keep your distance out of courtesy — while it’s public, you’re essentially attending a funeral uninvited.

The mourning period lasts 12 days, after which Hindus believe the spirit and physical body part. About 360 kg of wood and 3 hours of fire is required to complete the cremation. 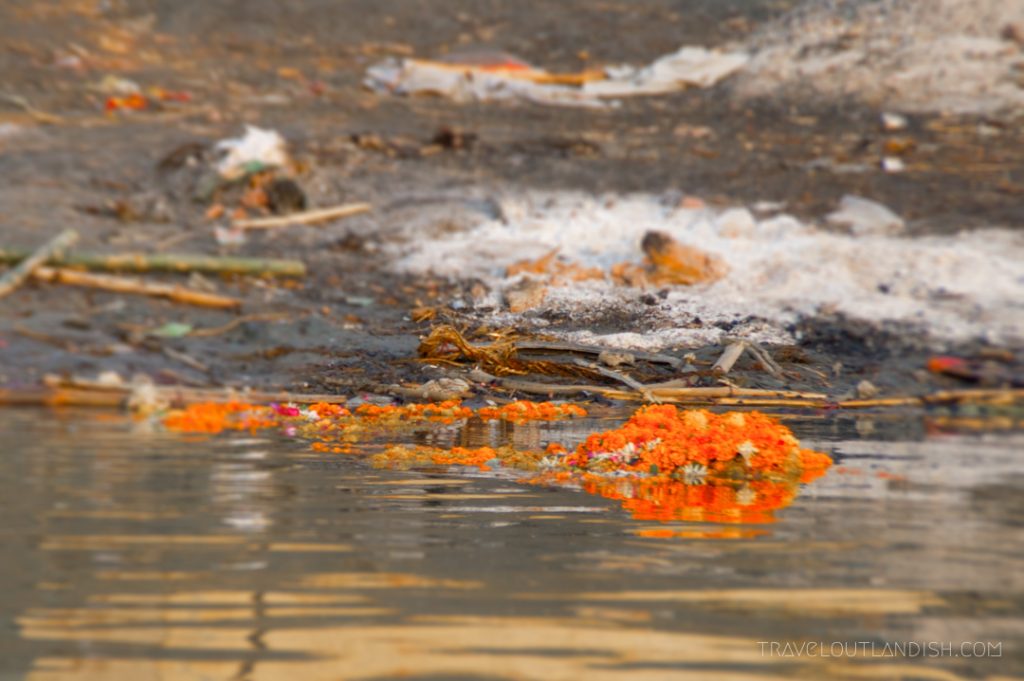 The deceased will be dressed in new clothes, covered in flowers and garlands, and their mouth filled with holy water. Rather than simply sinking them in the river, they are burned because the physical body must be purified (in a spiritual sense) before the ashes can be dispersed in the Ganges. Sheathed in goldenrod silk, bodies are placed upon a wood pile which will catch fire and in turn the flesh, melting away like wax, into ash. That being said, pure spirits are allowed to be sent out without cremation and their bodies are instead sent out in a weighted cloth (ex. those who died young, of smallpox, of cobra venom, while pregnant, or as a priest).

Water is viewed as a source of life and creation, and in Hindu tradition, burial in the holy Ganges is a charitable end to the never ending cycle of moshka (reincarnation)– no more toiling away, no more striving, just Nirvana.

how do i get to Varanasi?

Varanasi can be easily reached by train. Train travel in India is a fascinating and (relatively) effecient way to get around. If coming from Delhi or Calcutta, you can expect about a $20 journey lasting between 12 and 17 hours… if we’re being honest, it’s never 12. For a more efficient and similarly inexpensive option, you can check flights through IndiGo and SpiceJet which will be closer to $100, but should only take 1-2 hours.

A little something extra

At the Ganges — the holiest of places to be buried as a Hindu — life and death mingle freely on the river banks. Varanasi is a visceral experience that you can hardly process until your train pulls away. Are you thinking about travel in Varanasi, India? Here’s how to do it!

My 13-year-old self wanted to see Varanasi. What experiences have you always hoped to have?