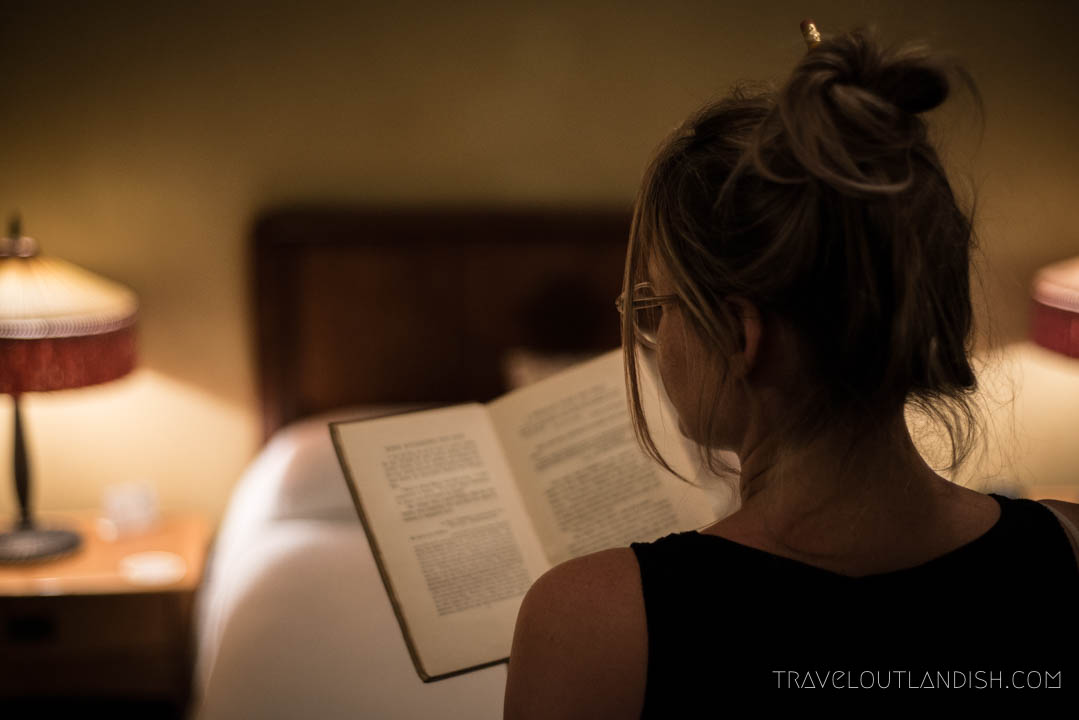 This post is in partnership with McMenamins Kennedy School. I received a complimentary night in exchange for my honest review, but all opinions are my own!

At McMenamins Kennedy School, drinking in detention is encouraged. You can hang out in the movie theater all day without getting suspended. And rather than sneaking into the Teacher’s Lounge, you’ll find a soaking pool where stale coffee used to brew. This iconic Portland hotel lets you do all the things you would have done in high school if you were cooler (assuming you were a choir kid like I was) and it looks good doing it. 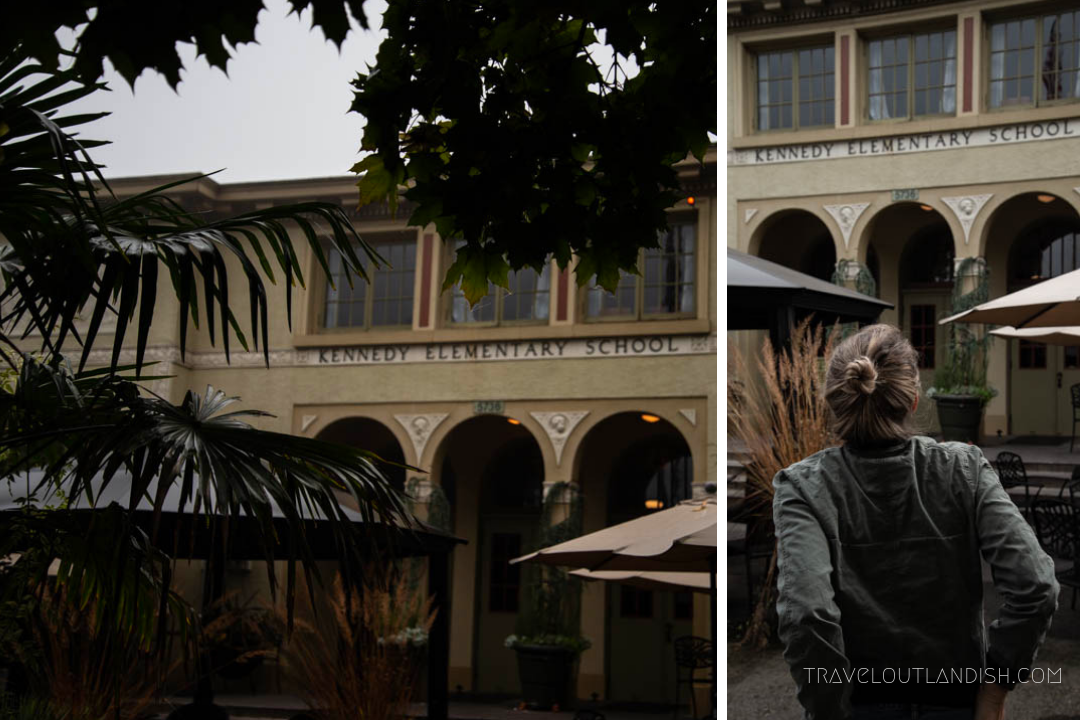 I heard about McMenamins Kennedy School on my first visit to Portland in 2016. The elementary-school-turned-hotel sounded too weird to miss back then and it’s stayed on my radar all these years. This time around, I finally got the chance to visit! Take a look inside the quirky hotel in Portland that started the idea for stay strange.

McMenamins is something of a local empire in the Pacific Northwest. Starting in 1983, the McMenamin brothers started restoring historical buildings around Oregon and Washington. Today, they operate 55 properties with breweries, hotels, concert venues, and everything in between. While each of their properties is completely unique, they tend to be decorated with ceramic work, garish lampshades, and a distinct style of art that could only be McMenamins. 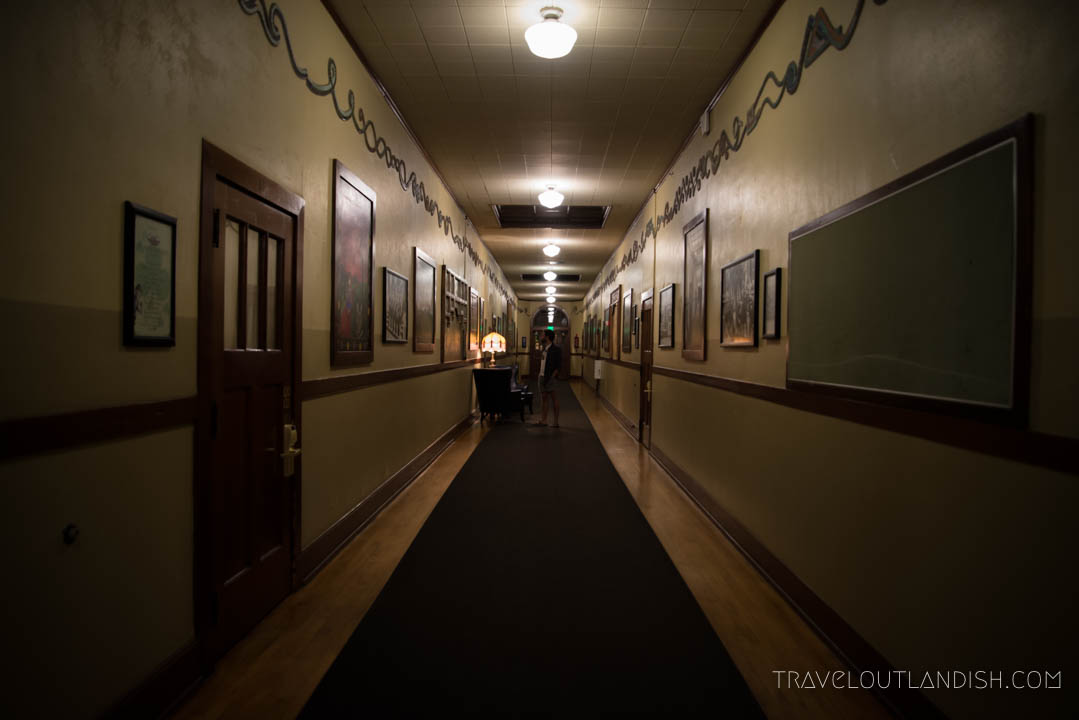 Rooms: McMenamins Kennedy School is a former single-story elementary school that now hosts a complex of guestrooms, a restaurant, bars, a movie theater, and a soaking pool. There are 57 rooms at McMenamins, many of which have the original chalkboards and cloakrooms alongside other furniture that will make you nostalgic for your own school years.

The building is divided up into two wings: The English Wing and the School Wing. Rooms in the English Wing are a bit more modern with a literary theme while rooms in the School Wing were former classrooms at the Kennedy School. Practically speaking, whichever room you get is just fine. Every room has a super comfy queen or king bed, a private bathroom, and plenty of lamps that create soft lighting in the room. Book your room here. 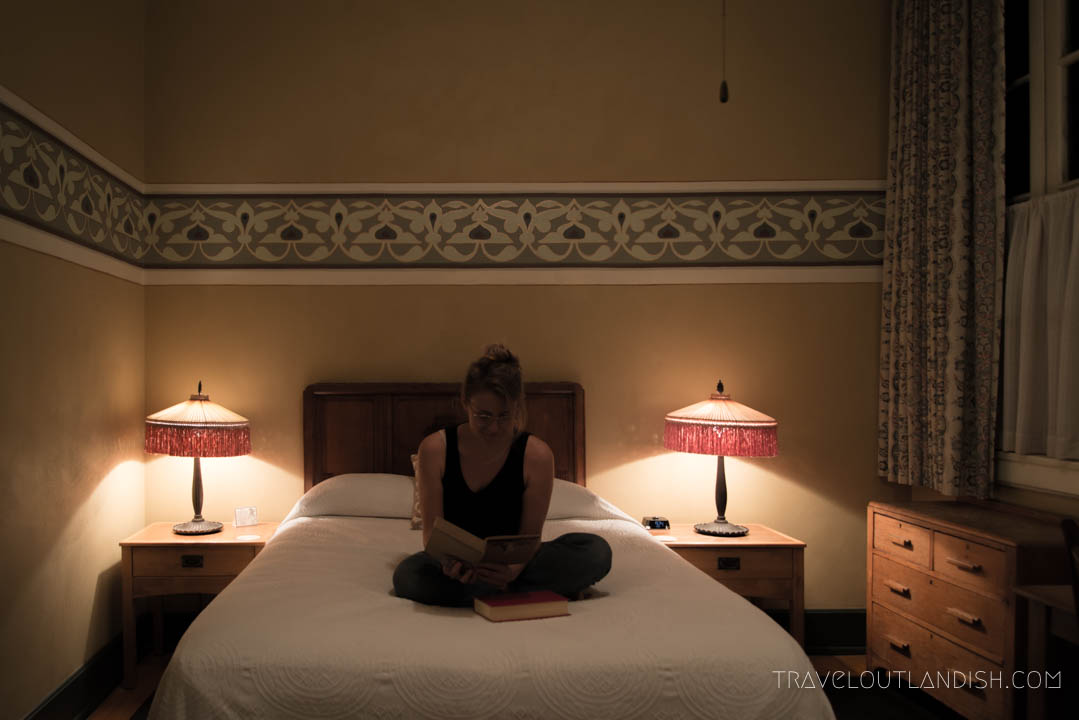 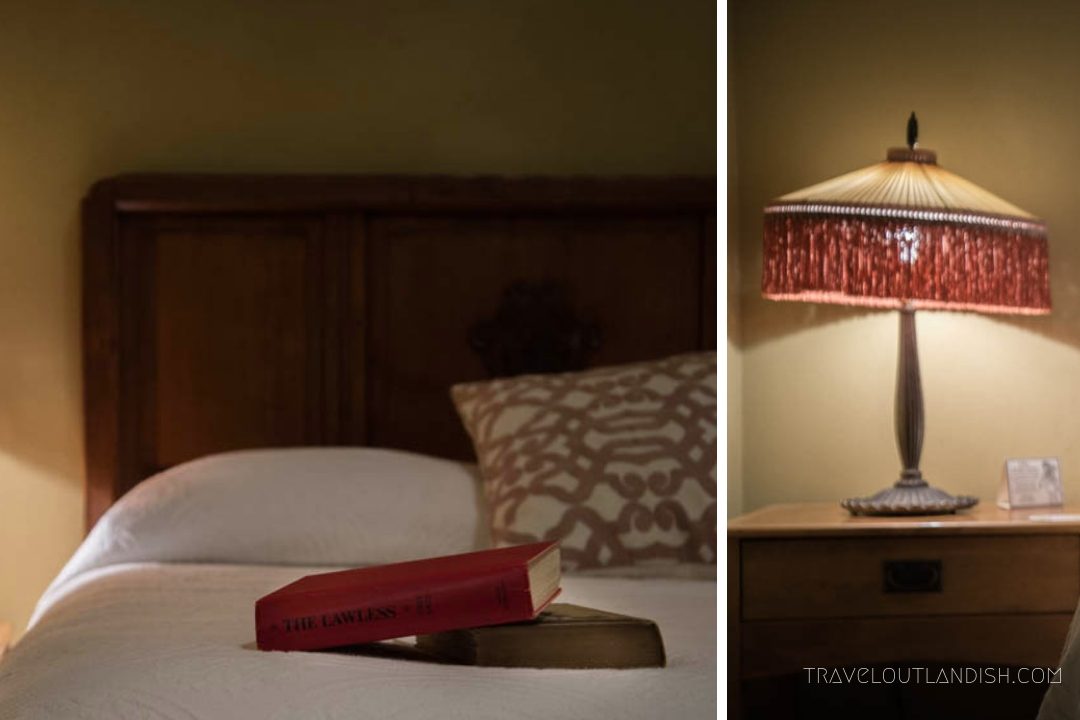 Value: Yeah, rooms at McMenamins are surprisingly comfy, but why come all this way to sleep when you’ve got a soaking pool, a restaurant, and plenty of bars on campus? The rooms at McMenamins Kennedy School range from $165-$245 depending on your dates and suite type. You can check prices or read more reviews here.

Who cares what the weather is like outside? It’s always a good time for a soak if you ask me. Located where the Kennedy School teacher’s lounge once stood, the soaking pool at the Kennedy School has a ceramic-tiled bottom and is surrounded by greenery. Probably the best part about the soaking pool is that it’s hot enough for a cold evening without being too hot for a warm day. 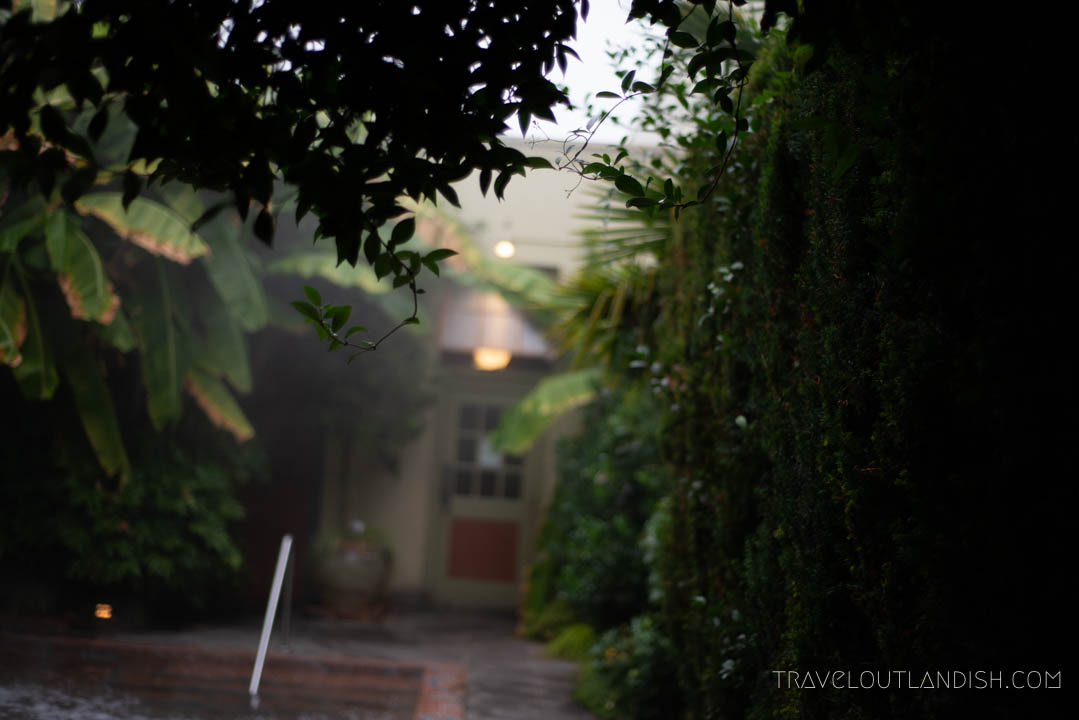 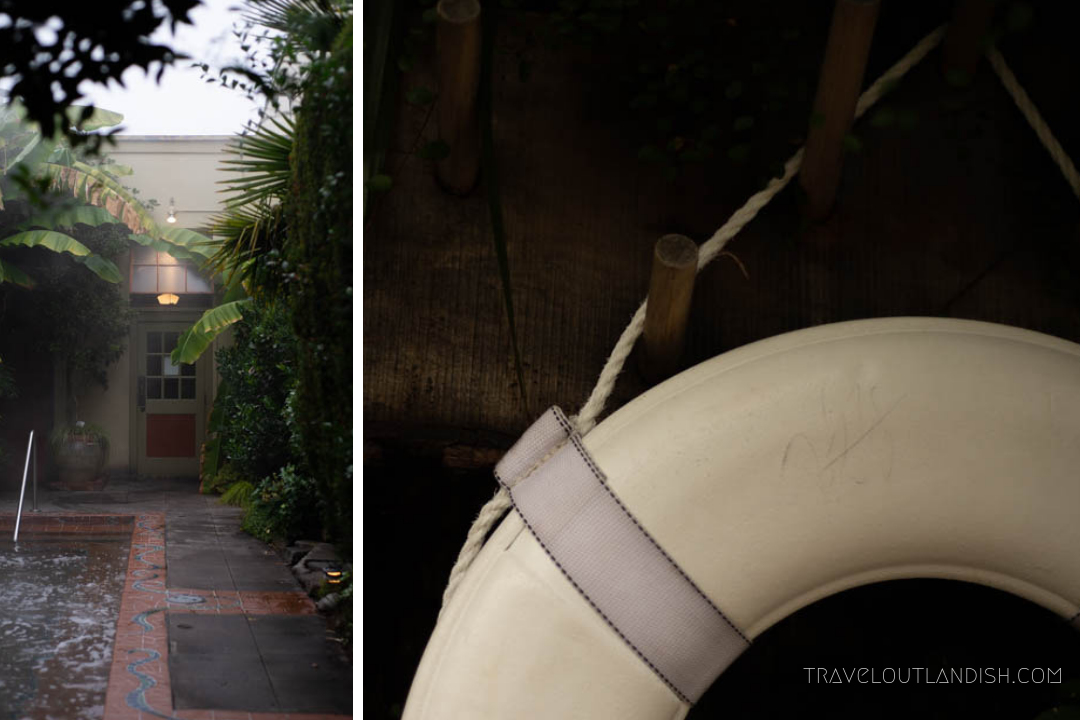 Tips: The pool is free to use for hotel guests and Portland residents, or just $5 for anyone who wants to pop in for the day. Get there early to avoid the ruckus! Also good to know is that any of the bars on the property will serve you your drink in a plastic cup so you can bring it into the soaking pool with you.

The Kennedy School Movie Theater is in the place where the school auditorium once stood. Outfitted with plush old couches and squishy armchairs, the theater offers screenings up to 5 times per day and offers a mix of classics and new films. Tickets are free for guests of the hotel or just $4 for adults who want to pop in for a screening.

There are 5 bars at the Kennedy School: The Cypress Room, a bar all about rum and reggae; the Detention Bar known for its single malts, or bourbons, and cigars (for later consumption); the Honors Bar, which serves a sophisticated set with cocktails and opera music; the Boiler Room which is a multi-level bar with table games and craft beers; and the Theater Bar where you can stock up on popcorn and beer before hitting the on-campus theater. Don’t stress yourself ahead of time about which bar to visit; you can bar hop without even having to leave the hallway. 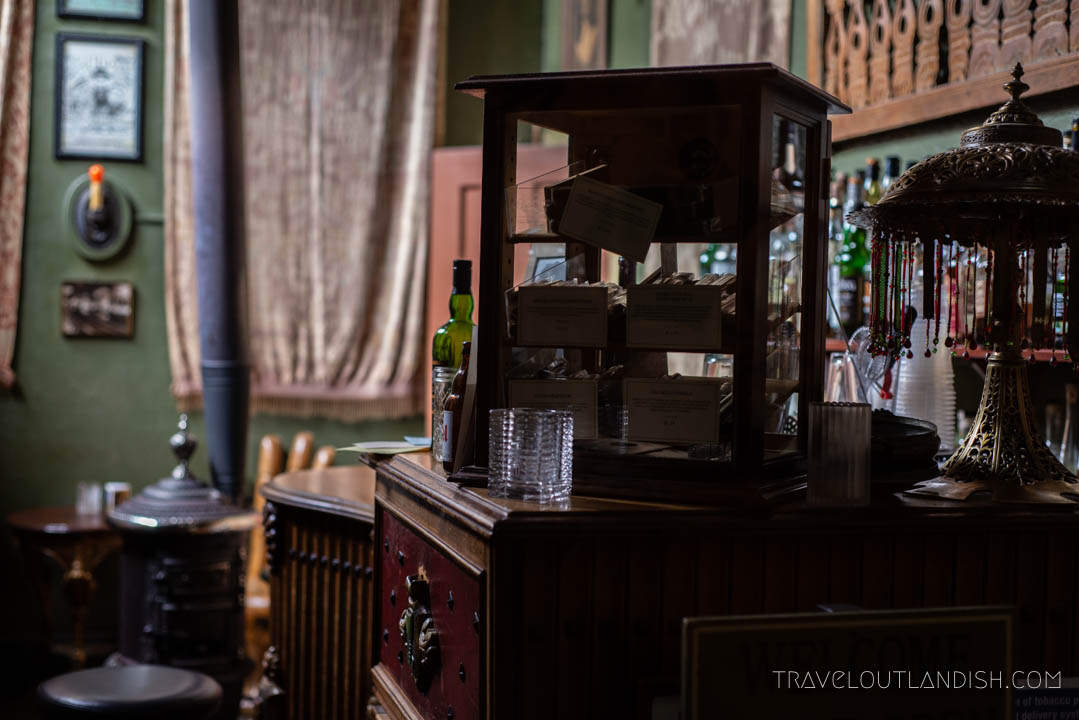 McMenamins is located in Northeast Portland just 15 minutes from the airport. It’s an easy walk from the Kennedy School to the Alberta Arts District where you’ll find some of Portland’s coolest brunch spots and eclectic bars. The Pearl District is a bit far from the property, but easily accessible by taxi or bus. If you’re looking for a place to stay that feels neighborhoody and distinctly Portland, Northeast is a stellar place to stay.

And if you’re traveling in Portland…