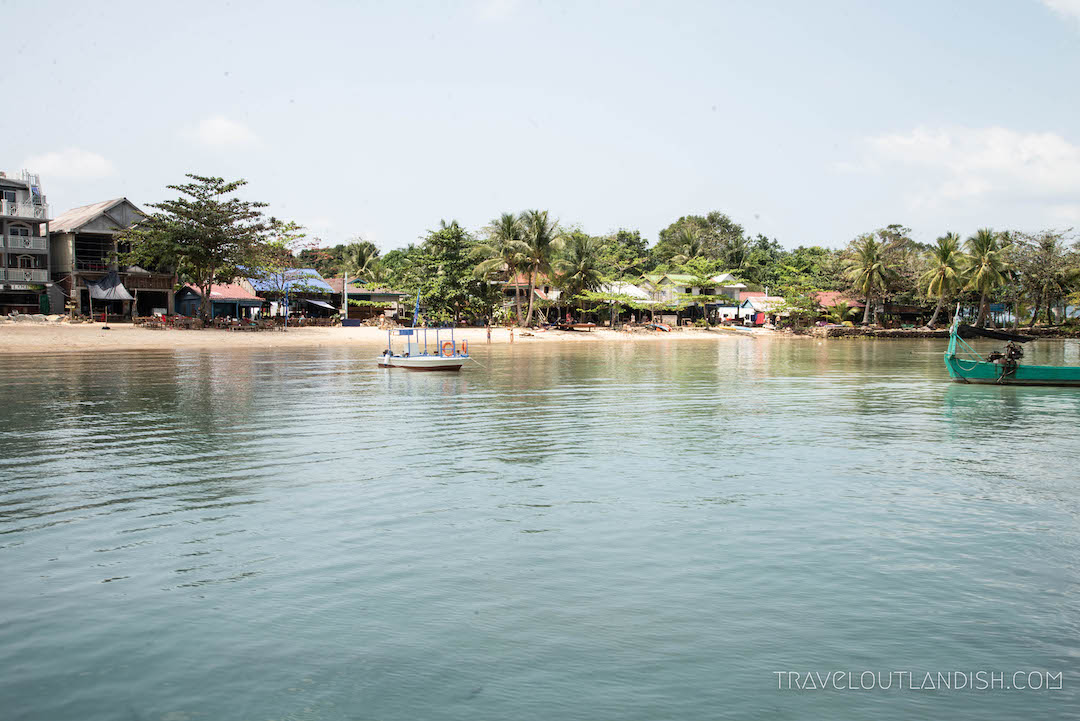 The islands of Cambodia have slipped under the radar better than their Thai neighbors. Koh Rong Samloem, just a 45-minute ferry from Sihanoukville, is one such sneaky Cambodian island. Saracen Bay is where you’ll find most of the accommodation on Koh Rong Samloem, but the even more chill alternative to rowdy Southeast Asian island experience is the quieter north side – M’pai Bay.

Maybe you haven’t heard your pals coming back from Cambodia with tales of Full Moon parties and the scars to prove it, but that’s 100% the best part about Koh Rong Samloem. It’s less crowded. Life moves slower here. And while it would be a lie to say that Koh Rong Samloem has completely dodged the ravages of the Southeast Asia backpacker scene (what a bunch of locusts!) it has done better than most. It’s a more-than-worthy addition if you’re already visiting Cambodia for Angkor Wat (more on that here!) and want more chance to explore the country. 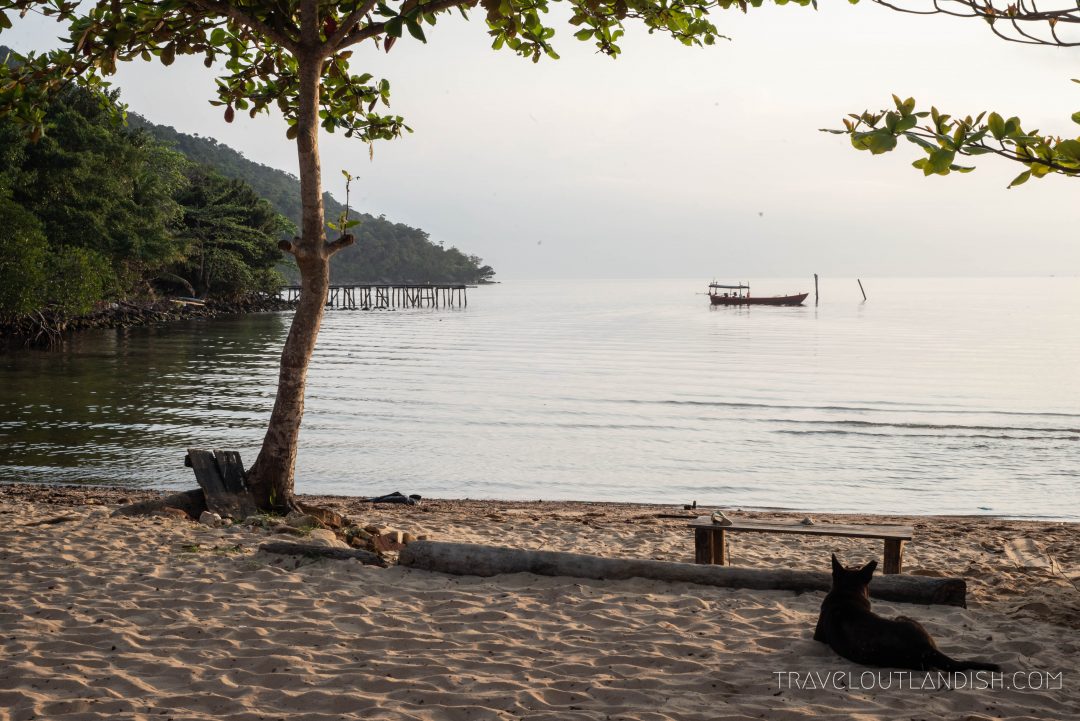 M’Pai Bay is a sweet little bay on the north side of Koh Rong Samloem with regular ferries, a handful of hotels, and plenty of bars and restaurants to keep you fed for as long as you feel like staying. It’s just as beautiful, but there’s at least a little more of a chance for a glimpse at authentic island life. It’s the perfect place to stick around and chill for a while.

Want to explore M’Pai Bay on Koh Rong Samloem? Here’s a quick guide on things do, where to stay, how to get there, and more.

Things to Do in M’Pai Bay

M’Pai Bay is so close to the water that you can walk outside of your hotel in a snorkel and a mask and be underwater in less than a minute. And, ok. This might be enough to satisfy the casual snorkeler (me!), but I’ve heard best snorkeling in Koh Rong Samleom is actually on the west side of the island.

Lazy Beach is a hidden alcove on the West side of Koh Rong Samloem. It’s only possible to get here by water taxi or on foot if you hike the jungle trail between Saracen Bay and Lazy Beach. There’s just one resort here – the Lazy Beach Resort – so Lazy Beach has been sheltered from some of the boat and foot traffic that have impacted other beaches on Koh Rong Samloem. It’s supposed to have excellent water transparency and a good variety of coral and fish.

Sunset Beach is another popular spot, especially for scuba divers. It’s also in a secluded part on the west side of the island. While there are a few more accommodations beside Sunset Beach, the beach is protected by the same limited access as Lazy Beach. The area is well protected and flourishing, which definitely makes for a better all-around underwater experience!

On either of these beaches, it’s possible to rent snorkeling equipment for ~$2 and go off on you’re own. If you’re more serious or want to go diving, EcoSea Diver is one of the best-reviewed diving operator in Koh Rong Samleom. You’ll find them in the Seahorse Resort on Koh Rong Samleom, and their diving packages that start from $60. If you’re interested in getting PADI certified, they also run those courses from $410. 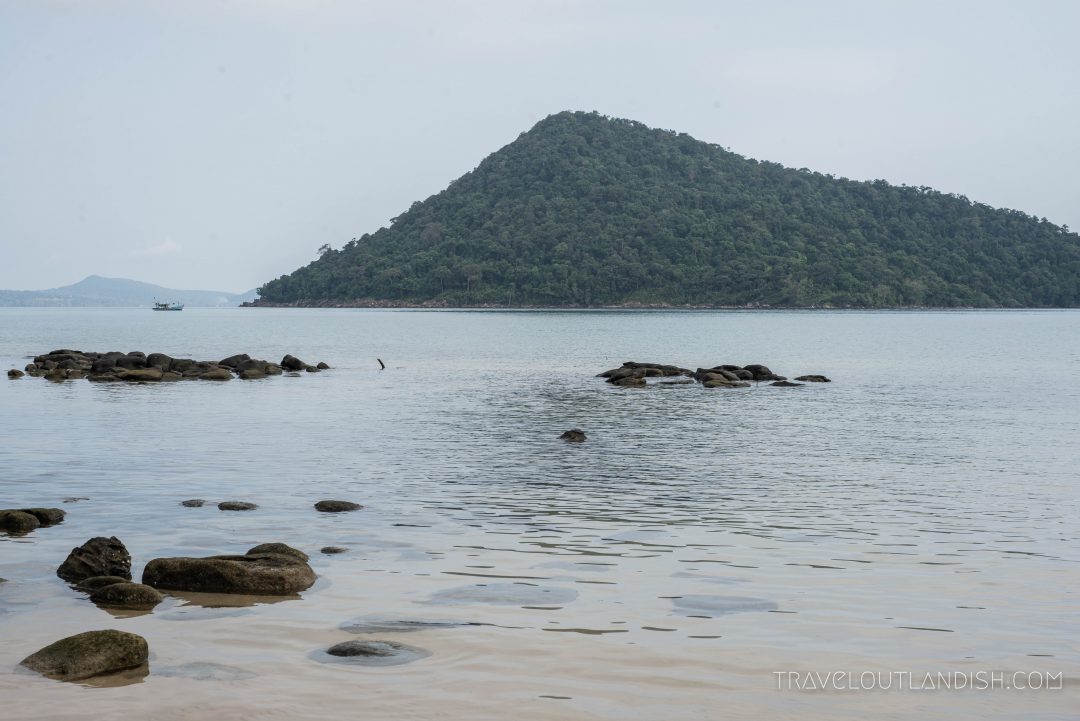 Walk Around the Town

M’Pai Bay is your typical island. Don’t expect the best food or the finest accommodation, and you’re in for a chill couple of days.

There’s a dense cluster of shops, restaurants and accommodations that run along the shore of M’Pai Bay. Bong’s Guesthouse & Bar is the most prominent establishment in town; not only is it the first thing you’ll see when you exit the pier, but it sits at the corner of both walking streets. The menu slants Western, but it’s a surprisingly comfortable spot to hang out. Another popular spot on the main drag is Lost and Found where you can sit in Papasan chairs and eat an Instagrammable breakfast (if you’re into that kind of thing). Other places you might eat are Blue Quay (surprisingly good pizza!) or Kunthea Khmer Kitchen (for your best shot at Cambodian food in Koh Rong Samloem). 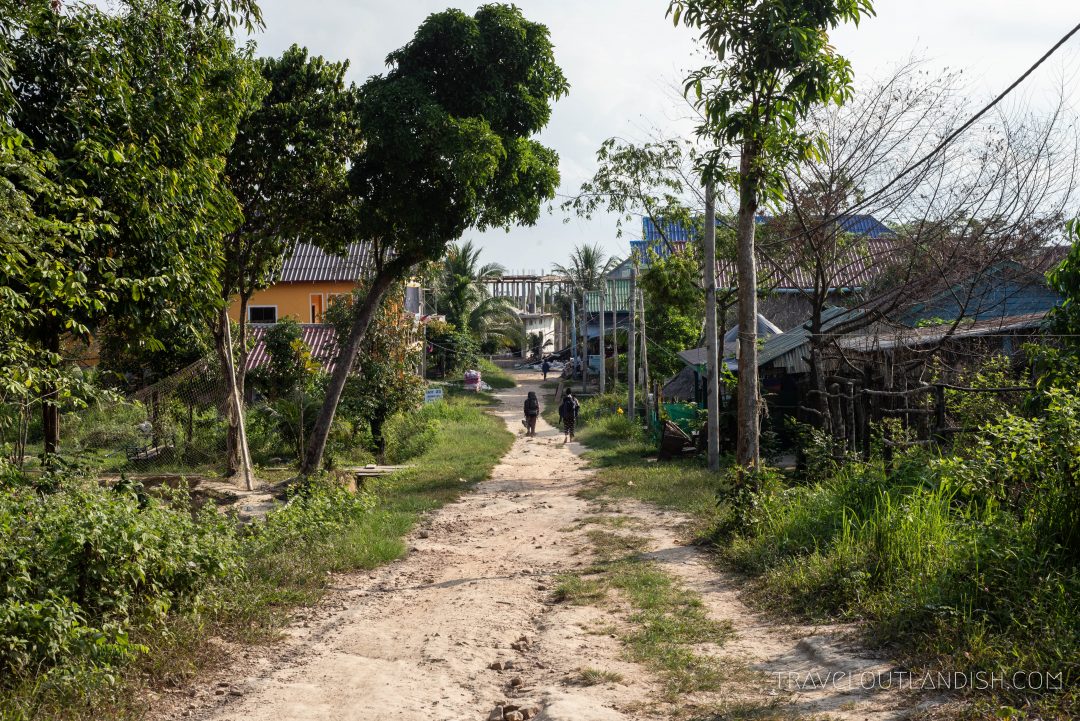 But M’Pai Bay is at it’s best when you head away from the water and walk upward. This part of town feels ever so slightly more local and less rowdy. My personal favorite place up here was The Lookout, a bar overhanging the water and tucked away from the action. Other spots to checkout along that road are The Little Spicy (a family run, super tiny spot for juices and simple food) and the Cliff Hostel (for awesome views and cold beer).

Get Out on a Kayak

You can kayak with or without a tour on Koh Rong Samleom. There is essentially no surf in Saracen Bay or M’Pai Bay, so paddling along the shoreline is quite chill and low risk even if you’re new to the sport. Kayak rentals start from $5-$7 per hour and are available from hotels or operators along the beach. 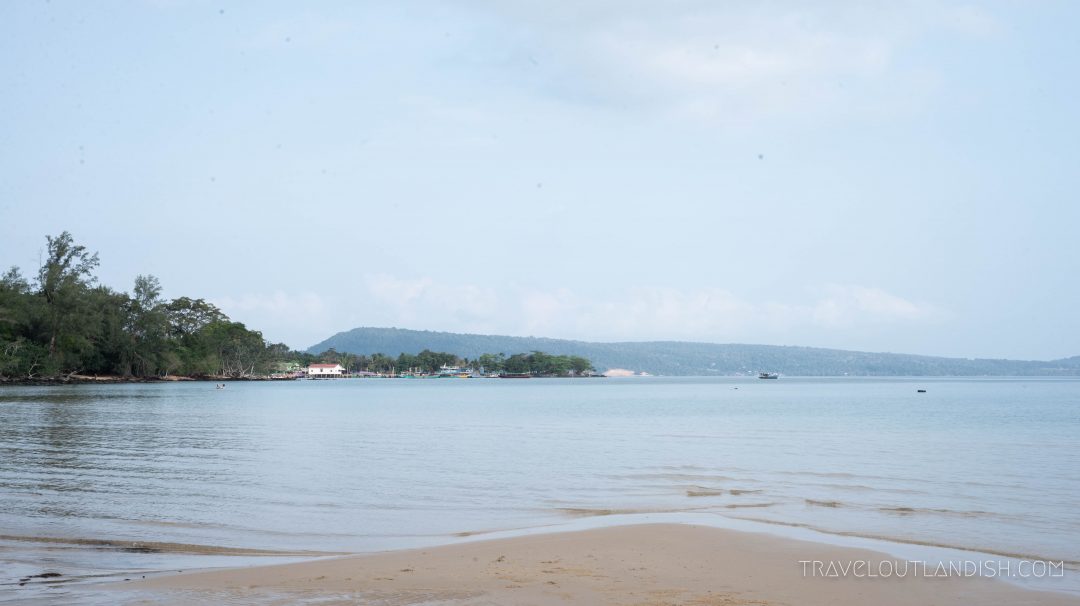 Night tours are also available, with the highlight being the bioluminescent plankton. Because of a chemical reaction, the plankton glow-in-the-dark, illuminating the water as you move through it. Karmakazi runs tours that depart daily from $20. 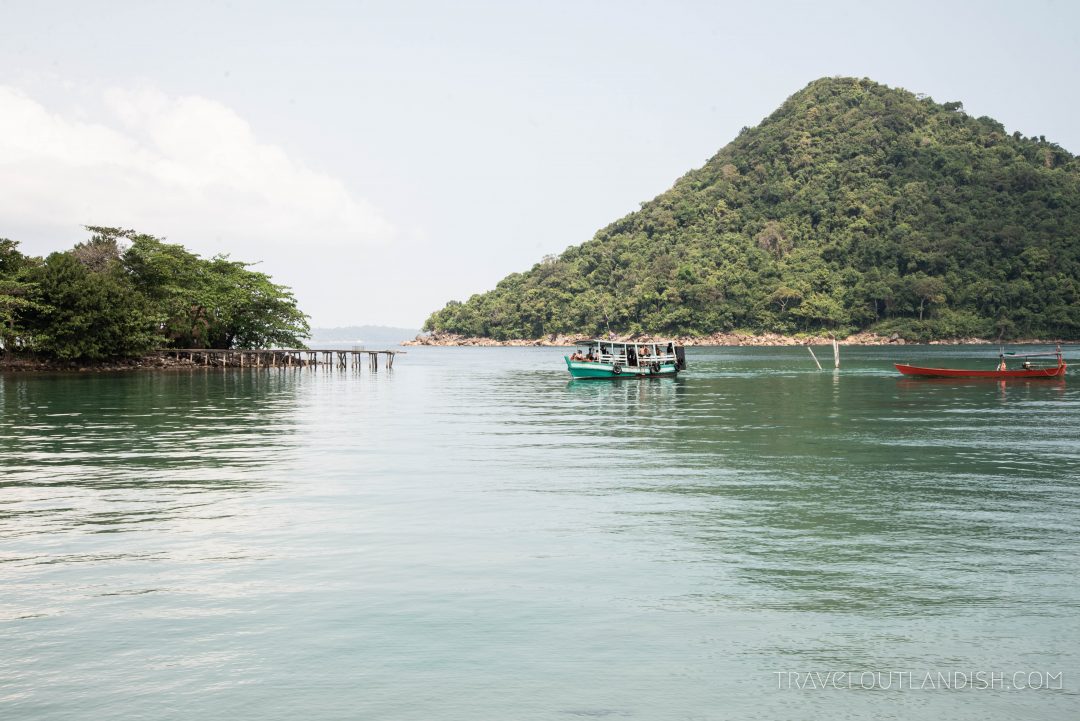 Hike Through the Jungle

Koh Rong Samloem is only 25 km². If you can handle the heat (can you, though?), it can be a fun excursion to go hike the jungle trail that travels from one side of the island to the next. Since the island is divided up into bays and you can’t navigate the periphery, hiking through the jungle is essentially the only way to get around the island without taking a boat.

You can cross the island from M’Pai Bay to Lazy Beach in about 20 minutes. 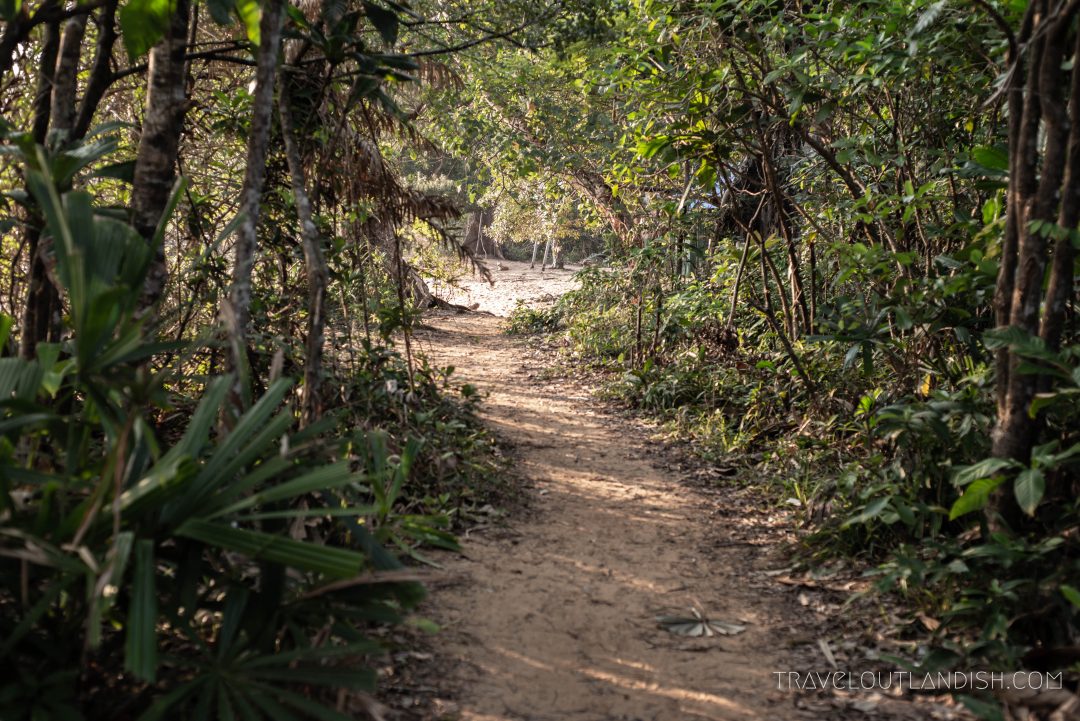 Basically every hostel and bar in town is seeking “volunteers” who are willing to put in some easy working hours in exchange for free accommodation. You can stay weeks or months this way. While the island life is not the life for me, I can definitely see what would make Koh Rong Samloem a desirable spot for some.

If you want to give it a try, sign up for a Workaway membership to look for opportunities on Koh Rong Samloem or in other parts of Cambodia. You can also simply show up on the island and ask around for hostels or bars seeking volunteers.

Where to Stay on Koh Rong Samloem

There are plenty of hotels on Koh Rong Samloem. Most are found in Saracen Bay on the East, but you can find a fair few at M’Pai Bay on the North, and a handful more on the West. Accommodation ranges from dodgy dorm beds to beachside cabañas, and I’d say in general, the standard is lower than what you’d find in other parts of Cambodia. That said, that’s the price of island life! Here are some of the best options for where to stay on Koh Rong Samloem. 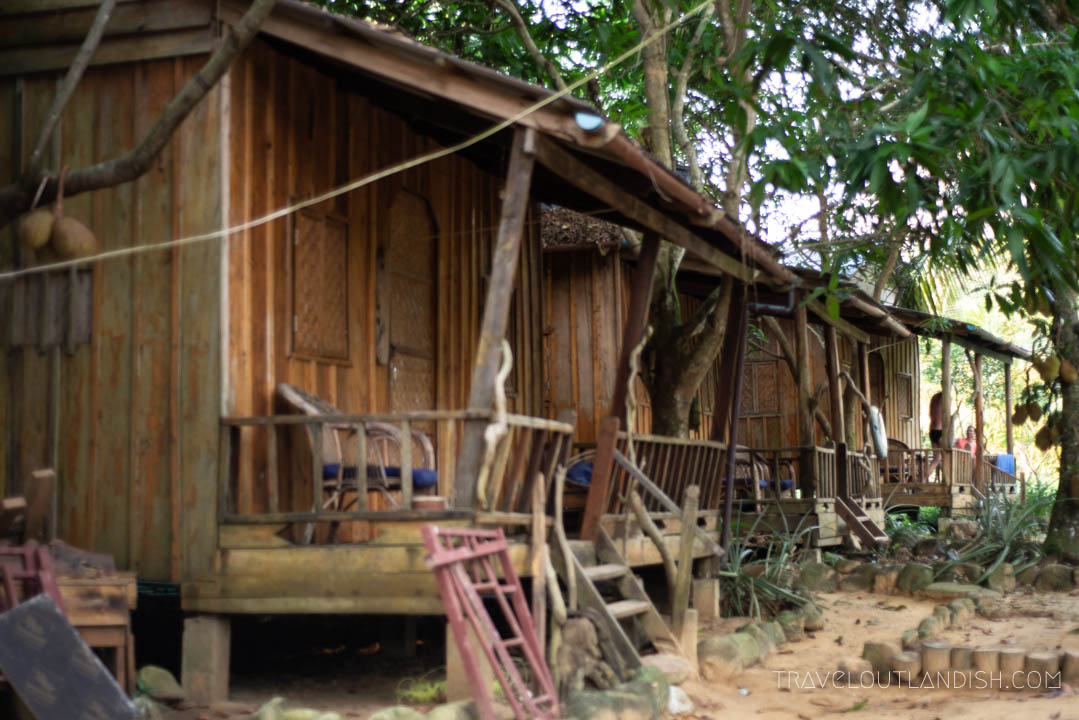 Saracen Bay Resort | What Saracen Bay Resort lacks in vibe, it makes up for in cleanliness and comfort. The bungalows are the most modern on Saracen Bay with more stylish furniture and air conditioning. Since you’re right next to the beach, your room might still end up a sandy mess, but it’s at least less likely. Doubles from $109.

Bamboo Jam | While this accommodation is two-stars, everyone raves about the atmosphere at Bamboo Jam. The rooms are modestly furnished stand-alone cabanas with direct water access. Doubles from $71.

Lost and Found | Lost and Found is without a doubt the most stylish hostel in M’Pai Bay. The property sits above the restaurant by the same name and the rooms are basic but stylish. Great value stay. Doubles from $15.

Sunset Bungalows | The Sunset Bungalows are decidedly rustic, but the reason to stay is all location. It’s seafront, but it’s also along a jungle trail. And since it sits on a peninsula, you’ll get more privacy than you might in any of the other hotels on M’Pai Bay. Bungalows from $35.

Lazy Beach Resort | Appropriately named is Lazy Beach Resort, the only resort on Lazy Beach on the west side of Koh Rong Samloem. You’ll stay in one of ten wooden bungalows with simple interiors and one hell of a view. It’s not easy to get to, but the reason to stay at Lazy Beach Resort is to enjoy an isolated part of the island. Bungalows from $45 – $75 depending on the season.

Robinson Bungalows | Just north of Lazy Beach, Sunset Beach is also on the quiet west side of Koh Rong Samloem.  Robinson Bungalows is the best joint around with a mix of bungalows and bell tents at a pretty low price. At the time of writing, there was little more in the room besides a mosquito net and a bed, so be prepared for a rustic stay. But as a benefit, you’ll be staying in a more cozy side of the island with a less-rowdy crowd. Tents from $20.

How to Get to Koh Rong Samloem

The closest airport to Koh Rong Samleom is Sihanouk International Airport (KOS) outside of Sihanoukville. From the airport, you’ll need to catch a taxi to Ochheuteal Pier (aka “Serendipity Pier”) for the ferry to Koh Rong Samloem.

There are four ferry companies – Speed Ferry Cambodia, Island Speed Boat Cambodia, Buva Sea, and GTVC – that run the 40ish minute trip between Sihanoukville and Koh Rong Samloem. Not all ferries go to M’Pai Bay, so be sure that you’re booking a departure that does. The trip costs roughly $25 roundtrip, and tickets are worth buying in advance and the route regularly sells out. 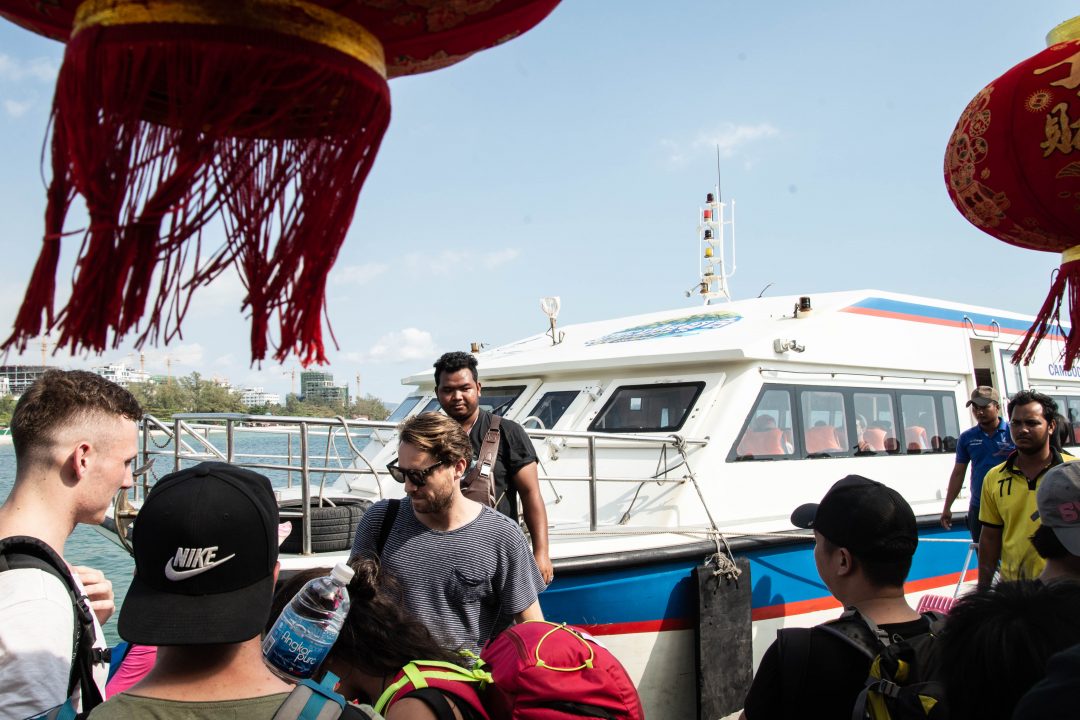 Trash is a serious problem. Koh Rong Samloem has a real trash problem. You’ll see plastic cups and take-away food containers piled up beside trees and waste washed up on the beach. Unfortunately, many bars and restaurants don’t properly discard of their own waste, so even using a trash can isn’t assurance against litter. Do your best to limit your use of single-use plastics.

There’s no WiFi. Or at least the internet connection on M’Pai Bay is weak. While some bars have WiFi passwords, we didn’t have enough service to do more than send a couple of text messages over the three days we spent there.

Bring all the cash you’ll need. There are no ATMs on the island and most places are cash only. The cost of travel here is also at least double what you’ll pay in mainland Cambodia.

Still have questions about Saracen or M’Pai Bay? Any things to do on Koh Rong Samloem that you think I missed? Ask in the questions below.