Galvanized Off the Grid South America 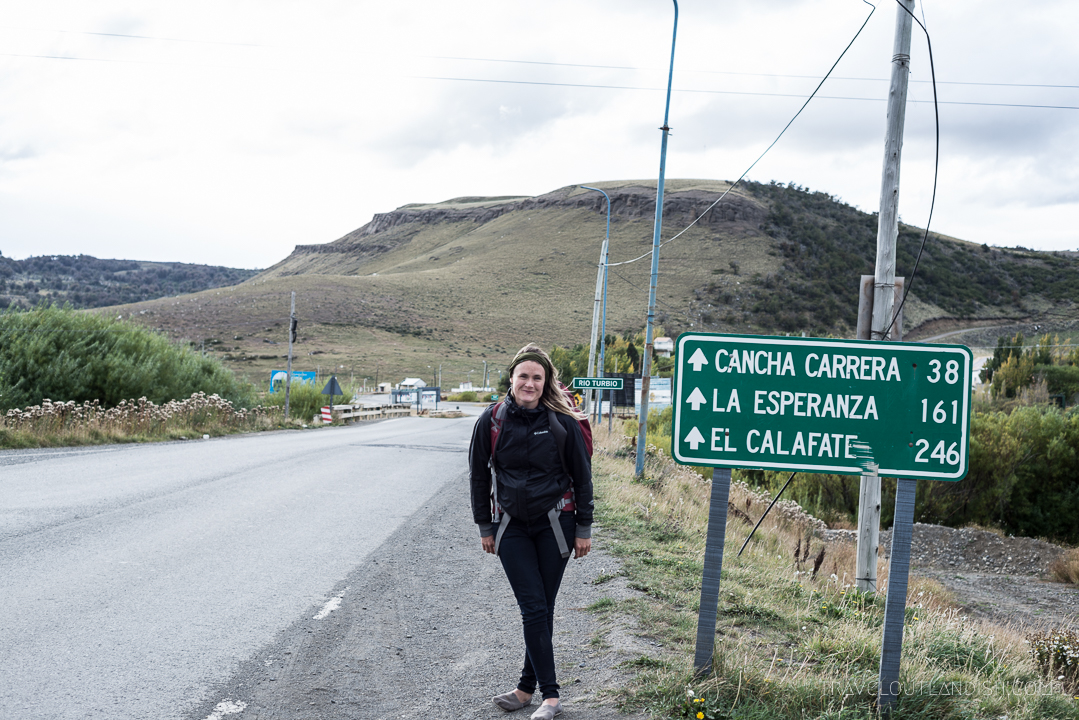 After trekking the O Circuit in Torres del Paine, I found it almost impossible to leave Puerto Natales. The town itself was uninspiring but I made a tight group of friends on the trail. We hiked together, so it was only right that we drank too many celebratory beers together too. But as it happens when traveling, we had to move on, one by one. I planned to take the bus eventually, but only when my feet stopped hurting, when I felt ready to go, when everyone else left. In truth, it had been days and I hadn’t even bothered with the walk to the bus station. When my hostel roommate suggested hitchhiking to Argentina, and asked me to come along, I had no excuse for a “no”.

Thinking about hitchhiking in Argentina? Hitchhiking from Puerto Natales to El Calafaté was one of my weird highlights of South America. You’ll find specific details on hitchhiking Argentina at the end of this post!

Off to a Late Start | Puerto Natales to Ruta 40

We started out hours later than we should have. It was around 1pm by the time we got to the road, and we expected the journey would take 4 hours with stops.After the first dozen cars passed us, we experimented with different headwear. We changed our jackets. We tried both standing, then one person sitting. We put our bags on and then took them off. We smiled kindly, we tried to look cool, we laughed maniacally, and we acted aloof. We held a sign that said “Ruta 40” with a smiley in the zero that looked like Batman’s Joker, offering more threat than comfort to anyone who might have otherwise stopped for us. But eventually — fortunately —
someone did. 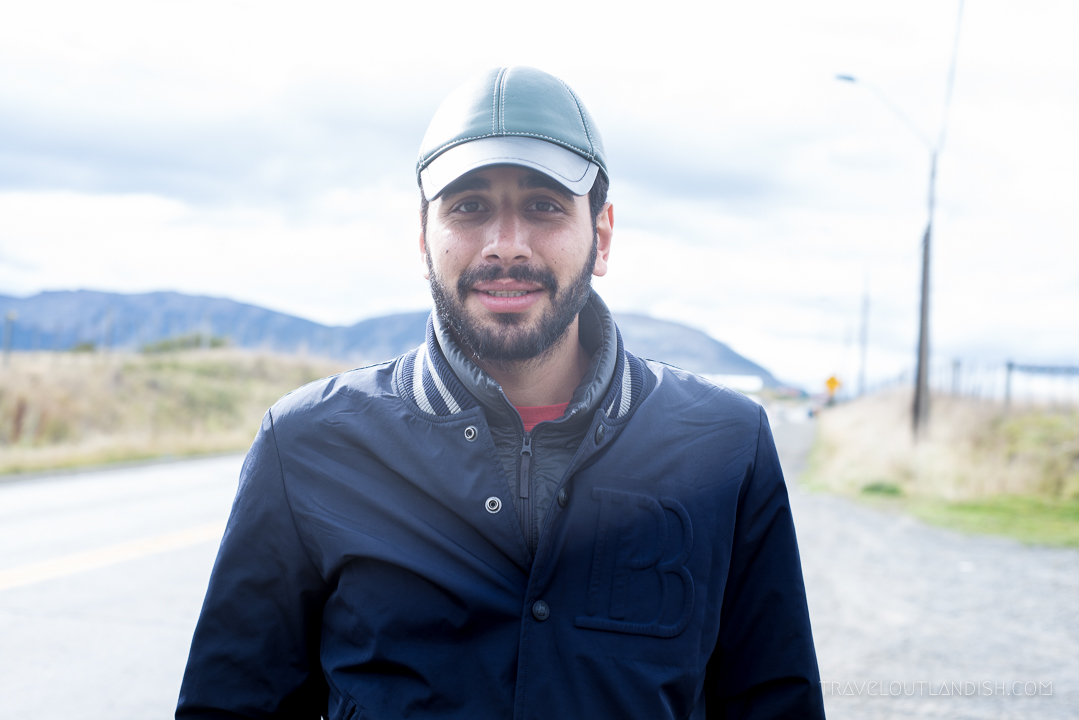 Our first ride was a semi-truck. As he came to a stop, a rush of bloodied water came rushing out the tail of his truck. The foul smelling drip indicated he could only be carrying one thing — seafood. Weighed down by our backpacks, we hurled ourselves up into the cab of his truck. He had a young face, much more handsome than you’d expect a trucker to be.  He told us about the region and how he changed from tourism to trucker. We asked what he had in the back and he told us a word we couldn’t understand. I later learned that “lamprea” meant “lamprey”. You know, the horribly ugly, jawless fish that looks like the heart of an artichoke? Apparently the pay is good for a lamprey distributor, and that after just 5 years of driving, he’d been able to buy a house.

He pulled over about 30 minutes up the road and dropped us at a small red shack filled with deconstructed cardboard boxes and shredded gift wrap. Scrawled on the wall in broken French were the worlds “if you’re reading this, you’re probably in trouble”. 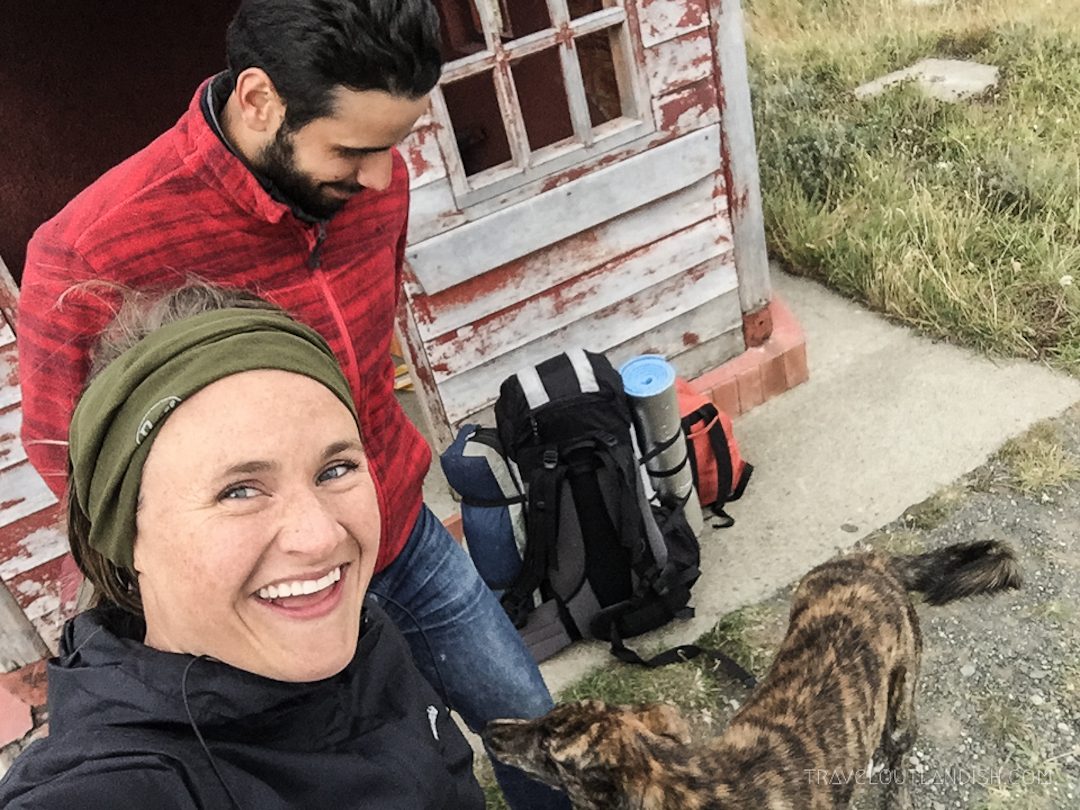 We were only waiting for some 20 minutes before a couple pulled over for us. “Argentina?” they asked. We climbed in.

They were driving their small sedan to Argentina to buy gas. Apparently, the cost difference was significant enough to merit a bi-monthly border crossing, some 45 minutes from home. The conversation started out with a bit of the usual small talk, but my hitchhiking buddy managed to open them up with questions about their work. They owned a greenhouse in the frigid, barren Patagonia. They protested the idea that nothing grows in Patagonia, and flicked through photos of lettuce and strawberries and other colorful produce to prove it.

We hopped out of the car on the Chilean side for an exit stamp, drove 10 minutes down the road, and walked into the Argentinian side for our entry. “Como viajan?” the woman asked us, meaning how are you traveling? We told her we were hitchhiking, and to my surprise, she still waved us on.

They left us at a service station in Rio Turbio with directions towards Ruta 40. We postponed our departure with a food quest that began with a desperate knock on the door of a closed buffet and ended with a disappointing grocery store trip. Our dreams of pizza were stuffed into our backpacks with three pieces of bread, some pears, and a room temperature packet of sliced mozzarella.

A young man pulled over. He was only going 30km to the next town, but he would take us to the junction. As with our other drivers, he seemed to be just-older-than-young. I wondered whether they stopped for us to recall memories of adventure and spontaneity that had since been replaced by responsibilities. He had one daughter and his wife was pregnant with another baby. It was too soon to tell whether it was a boy or a girl.

He felt lucky to work as a math teacher. It was something he felt passionate about, and Rio Turbio was a mining town in an economic lurch. The town’s main employer had stopped paying wages to the miners. Protestors lived in encampamientos of worn tents and makeshift fire pits camp outside of the museum, crying for some sort of retribution. But it seemed as soon as our ride had started, we were at the junction. He let us out and pointed us towards our next road. 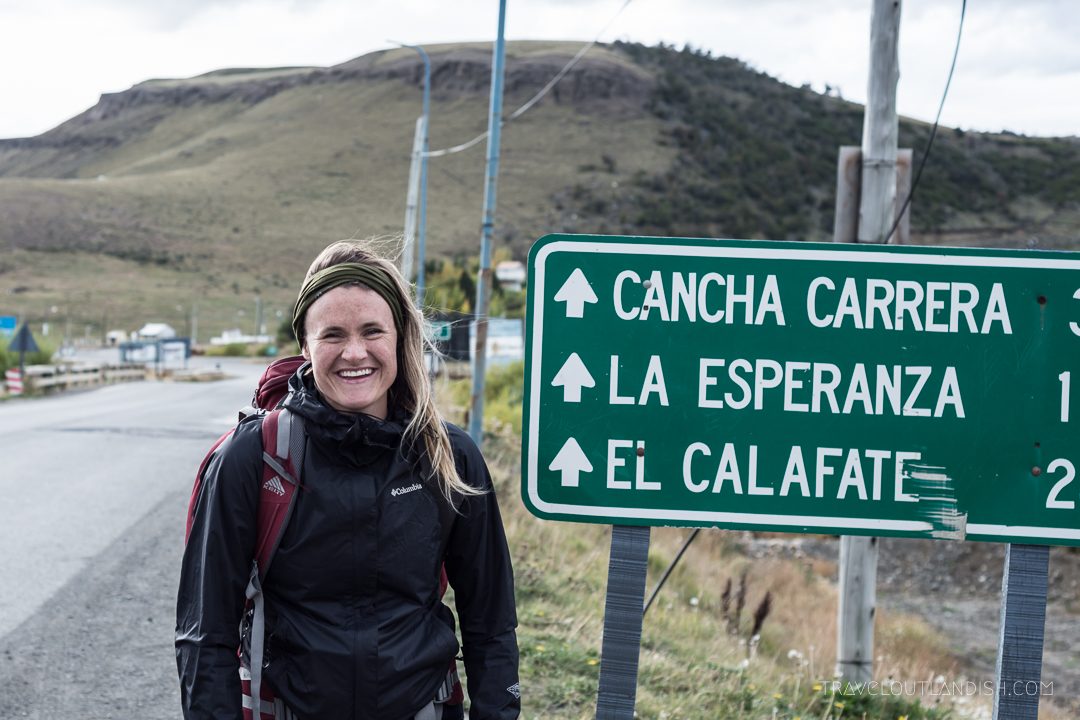 Our spot was just past a fork in the road, meaning maybe one in every 30 cars actually came our way. We bounced around to keep warm, gave friendly smiles and pretended that inside each car was a friend here to rescue us. After about 30 minutes, the skies grew cloudy and the mood started to change. Our once perfectly executed adventure became a hilarious series of tactics. A couple of other hitchhikers held out their signs ahead of us and behind us. This annoyed us, and we felt like an oldest child on the day that a baby sister is born. We tried to look nicer, we made our things look smaller, we tried desperate gazes and gestured for semi-trunks to honk at us. We made faces that said “We’re fun! Want to pick us up?” We waited, and waited, and braced ourselves for a night in Rio Turbio.

After 1.5 hours, it started to rain. Just as our hair started to drip, a driver pulled over and let us in. He was driving some seven hours home and he told us he felt sorry for us. A pity ride? We’d take it.

For the first time all day, we were in a car that would take us more than 45 minutes. We were prepared to get to La Esperanza (or “Hope”) where any cars would likely continue on to El Calafate. We had 2 luxurious hours before we had to worry about our next ride.

Our driver was 38-years-old, which is neither significant nor worth saying, but for some reason, we both remembered it when we arrived in La Esperanza. His wife was also pregnant, and he told us about his travels and about Argentinian custom. The road and the Spanish and the 1.5 hour wait had made us weary. Our once engaging conversation had trickled off into weakly worded, open-ended questions and we hoped he would do the talking.

The landscape offered mostly nothing, but a cloudy sky heightened the contrast of everything around us. Even the nothingness is stunning in Patagonia. We watched as the road went by and we inched towards El Calafate. I struggled not to fall asleep, to engage, to be grateful and lively, though my Spanish was fading and the warmth swirling out of the vents was cozy enough to make anyone weak.

When we finally arrived in La Esperanza, it was nearly dark. If we didn’t find a ride in one hour, we had agreed stay in the pitiful motel across the road.

Our first 30 minutes of waiting were depressing. All the momentum we had from securing a ride in Rio Turbio had begun to fade, and we were back to feeling desperate as the sideways rain and cold wind blew through. Several busses passed us, along with two seater cars that were otherwise filled with stuff. Drivers offered to take one of us. We briefly considered the option, but failed to decide who deserved it more, so the drivers went on. We asked busses at the gas station if they were willing to take an extra passenger, and got shooed away like pests. 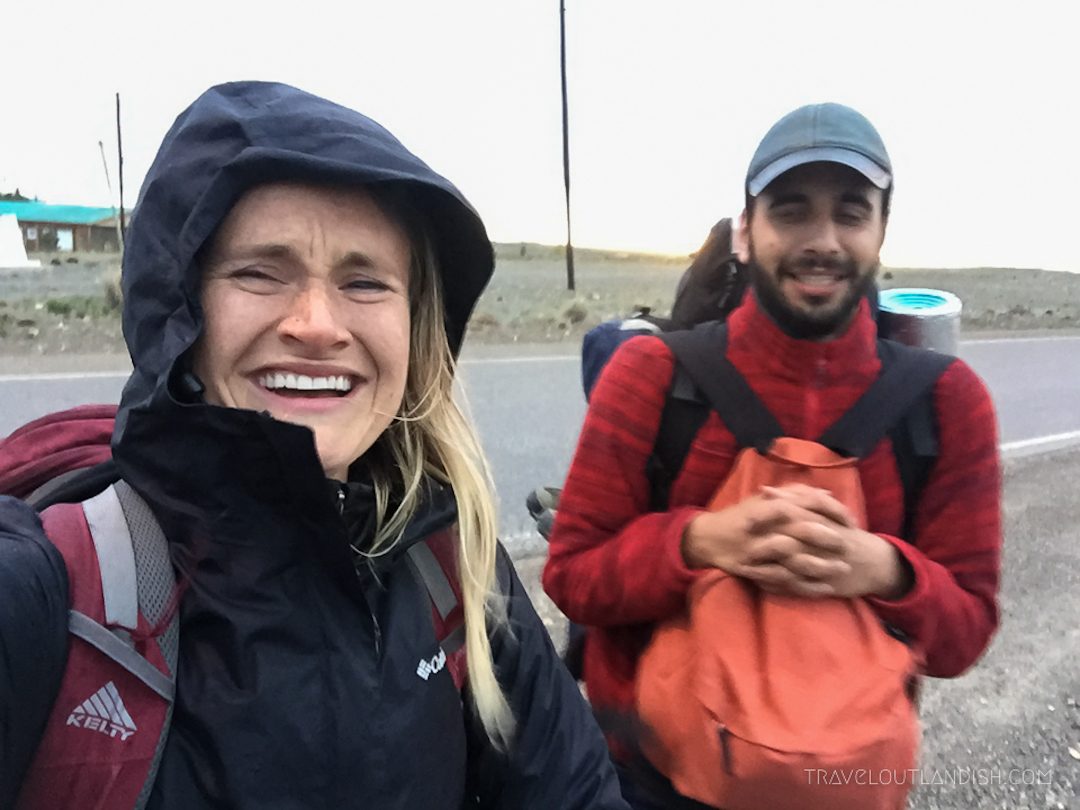 We waited on the road as it began to rain again. We were eager and so close, and it must have shown as an older man and his teenage grandson finally pulled over. “El Calafate?” he asked. It was all I could do to keep from shrieking and to instead answer “Si. Tú tambien???”

It was already dark by the time we reached El Calafaté. After dropping our bags, we went out for a dinner of Patagonian lamb and red wine that cost almost the exact same amount as a bus ticket from Puerto Natales to El Calafate.

Information for Hitchhiking in Patagonia

How to Get a Ride in Argentina: The best starting point for hitchhiking in Argentina is to wait just on the outskirts of town. Make a sign so that drivers know where you’re going if there are several possible destinations, and travel as 1-2 people to maximize your chances of getting picked up. You’ll also want to stand as far away from other groups of hitchhikers as possible. Hold out your hand or thumb, and try your damndest to look friendly. Drivers will often give hand signals when they pass you, like a swirling motion to indicate they’re just turning around or a directional gesture to indicate they’re going a different direction than you.

When someone does pull over, have a discussion about where you’re going and just how far they can take you. You’ll want to be sure that if they’re not going all the way to your destination, that they can at least drop you in a place with basic facilities or traffic. While payment isn’t expected, it can be nice to pay for gas or buy a meal if you travel several miles with the same driver.

Is hitchhiking in Argentina safe? Hitchhiking is generally quite safe in South America. It is recommended that you stick to towns or roads outside of urban areas. Also, it’s safer to travel with a buddy although rides are harder the more people you have. To safely hitchhike in Argentina, you should share your plan with someone before you start. Start early to avoid getting stranded somewhere late at night, but always come with a backup plan for the worst case scenario! Finally, come with a tent, sleeping bag, and cookstove in the event that you get stuck in a rural area. The weather in Argentina can be harsh, and you’ll need to brace yourself for anything.

Is finding a ride easy? Argentina is harder to hitchhike around than other South American countries. Finding a ride can take a few hours and sometimes one never comes at all. There were a couple subsequent times that I tried to hitchhike without success, and ended up on the bus instead. Within the country, you’ll find Northern Argentina is relatively easy when compared to the desolate South. The best place to find rides is at gas stations and truck stops with drivers from neighboring countries where hitchhiking is more accepted. 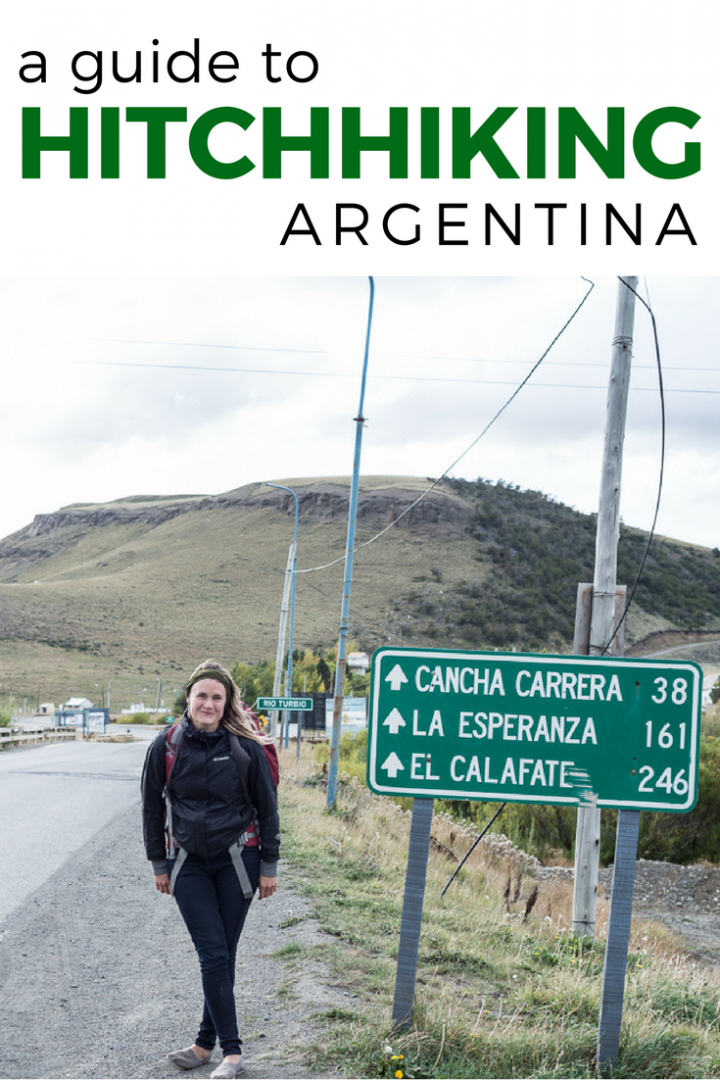 Ever gone hitchhiking? Share a story about your favorite ride in the comments below!