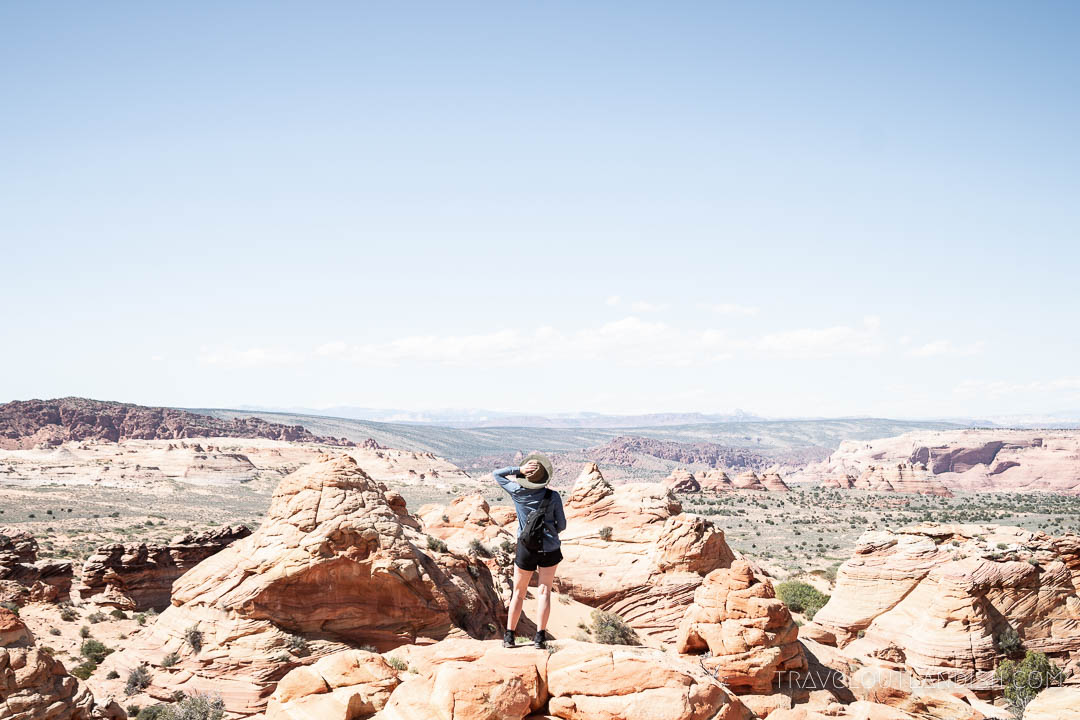 The Wave is something you’ll probably see on Instagram a dozen times before you ever know where it actually is. The desert-hued sandstone lines sweep continuously. They ebb from one side of the stone formation to the other in a bowl-shape. The result is what almost looks like a wave in a sandstone ocean. But because the area is fragile, Bureau of Land Management (BLM) only issues 40 Paria Canyon permits per day (hallelujah for conservation!) and only 20 that grant you access to The Wave.

Hikers and landscape photographers love Coyote Buttes North. On any given day, you’ll be up against hundreds of applicants who enter the online or walk-in lottery for permits. Only a lucky few will actually get to see the Wave for themselves.

But did you know there’s an alternative to The Wave that is just as cool and ever-so-slightly easier to get a permit for? It’s called Coyote Buttes South and it is also in the Paria Canyon-Vermilion Cliffs Wilderness. The geology is quite similar, but since the area is less-known, you’ll be up against fewer candidates in your quest to explore it.

Looking to see some of the incredible rock formations along the Arizona-Utah border? It’s just a couple hours from the Grand Canyon and a worthy addition to any Southwestern road trip. Whether you missed out on your permit for The Wave or just want to reduce your impact by exploring an alternative destination, here’s everything you need to know about visiting Coyote Buttes South.

Exploring the sandstone formations of Coyote Buttes in Paria Canyon-Vermilion Cliffs Wilderness is the next best thing to actually being a kid again. It’s a landscape of theme parks and a terrain from movies where dinosaurs lead. It’s bizarre and somewhat bewildering. And with limited Paria Canyon permits issued every day, both Coyote Buttes North and Coyote Buttes South have saved from the crowds in a way that many natural places have not been.

Best known for The Wave, Coyote Buttes North is the more sought after of the two Buttes. The Wave became famous because of its incredible symmetry. While it’s just one part of the area, it’s definitely the main reason people go.

In Coyote Buttes North, there’s no established trail, so you’re free to walk around on the slick rock, climb up teepees, and sit in the shade of hoodoos. The area is flat-out beautiful. If you’re lucky enough to get selected in The Wave lottery, by all means, GO. But getting lucky requires a lot of luck.

How to Get a Coyote Buttes North Permit: Your first attempt to apply for a Wave permit should be online. The lottery for Coyote Buttes North permits opens on the first day of the month, four months in advance. For example, if you’re looking to visit in April, you can apply from January 1st. You can apply here. It’s a $5 non-refundable application fee per entry, and you’re allowed to select three dates that you’re available to visit. The lottery stays open until the end of the month, at which point they’ll notify the winners.

But I want to shed some light on the odds: they’re not great! There are upwards of 1,000 people that apply per day, and only 10 permits are given out.

If your application is unsuccessful, you can either apply online for the next month’s lottery or try your luck with a walk-in permit. These are issued same-day at the Grand Staircase-Escalante National Monument Visitor Center in Kanab. You must apply between 8:30-9 a.m and winners are selected between 9:30-10:00 a.m. They only issue 10 walk-in permits per day, so your odds for a Wave permit are still pretty low.  If you are successful, permits cost $7. Anecdotally, I’ve heard as many as 150 people can show up during peak season to try for a walk-in permit.

The lesser-known spot in Paria Canyon-Vermilion Cliffs Wilderness is Coyote Buttes South. The area is still known for its insane geology, but since fewer people visit, Coyote Buttes South permits are issued directly rather than by lottery.

There’s no true photo-spot at Coyote Buttes South, but that’s kind of the beauty of it. You can walk around and find what you think is interesting! Another benefit of Coyote Buttes South? There are two separate parts: Paw Hole and Cottonwood Cove. This means that the already uncrowded capacity of 20 people per day is further dispersed across two areas.

Coyote Buttes South is a bit tougher to get to, accessible only by some treacherous dirt roads. You’ll want to have a 4WD, high-clearance vehicle to get there. There is no service and no defined trails. If you get a flat on your way out there, it could be hours before another car drives by.

To get one of the 10 online permits, go here on the day that permits open and reserve your spot. You’ll still need to be quick to reserve (within minutes of opening if you want your preferred date) but you’ll get instant confirmation of your Coyote Buttes South Permit so you can get back to planning your trip.

Its the same walk-in process for Coyote Buttes South if you miss the booking window or can’t get the date you want. There are 10 walk-in permits available, but fewer people apply.

How to Visit Coyote Buttes South

While permits sell out to both sites every day, Coyote Buttes South is still something of an unknown destination. Should you get your Wave permit, there’s more than enough information on Coyote Buttes North out there! But this is what you’ll need to know to plan your trip to Coyote Buttes South.

Paria Canyon-Vermilion Cliffs Wilderness is hilariously straddling the Arizona and Utah border; you’ll likely drive in and out of Arizona multiple times throughout the day. While it’s not clear from looking at the map, you’ll still need to drive through Arizona on the north side of Paria Canyon-Vermilion Cliffs Wilderness to get to Coyote Buttes South. This is true even if you’re coming from the Grand Canyon or somewhere south. Even if you get your permit online, drive to the Paria Contact Station first to get current conditions.

There are two sections of Coyote Buttes South: Paw Hole and Cottonwood Cove. To get to Paw Hole from BLM Visitor Center Paria Contact Station, you’ll head West on US-89 N for about 8km, then travel south on House Rock Valley Rd for about 27km. From there, you can either park at Lone Tree Access and hike in, or brave a sandy climb to the Paw Hole Trailhead on BLM1079. The BLM hosts described BLM1079 as rough terrain and the signs warn that it’s not for most cars. Even in our high-clearance vehicle, we had to keep moving and hope no one was coming the other way.

It’s an even rougher road to Cottonwood Cove. We were told cars frequently get stuck in the sand or bottom out on the rock.

The hosts recommended that we travel south on House Rock Valley Rd (the same way to Paw Hole), but continue around the Southside of the park and enter Cottonwood Cove from the East. Since the road slopes down through the Paria Canyon-Vermilion Cliffs Wilderness, they told us we were then ok to drive from Cottonwood Cove to Paw Hole. Since climate and road conditions are always changing, it’s super important that you go to one of the visitor’s centers to ask!

High season for Paria Canyon-Vermilion Cliffs Wilderness is June – August, and September-November. For the best chance of getting a permit, go outside of these months. Temperatures are actually the most moderate in spring and fall anyway!

Stateline Campground | Stateline is appropriately named based on its location straddling the Utah and Arizona border. Stateline has 7 designated sites with shade structures and pit toilets. The site is super well located near the Paria Canyon-Vermilion Cliffs Wilderness area. Free on a first-come, first served basis

White House Campground | Just south of the highway and the Paria Contact Station, the White House Campground has 5 sites and is conveniently located for adventures in Paria Canyon-Vermilion Cliffs Wilderness. There’s not much shade so it’s a better place to spend the night than hang out in for the day. From $5 on a first-come, first served basis.

Hotels in Kanab | It’s about 63km from Kanab to Paria Contact Station. Most of Kanab is roadside motels and hotel chains. That said, there are a few locally owned bed and breakfasts or inns where you’ll get Southwestern hospitality. Doubles from $69.

Hotels in Page | Page is one of the biggest towns in the area, but it’s still tiny and unexpectedly pretty. It has a handful of mediocre hotels, plenty of little motels, and even a handful of luxury resorts. Doubles from $148.

Anyone else checked out Coyote Buttes South? And if you’re heading to Arizona…