An Outlandish Guide to the Lost City of Choquequirao | Peru

Machu Picchu is awfully impressive but it does have one major drawback. Everyone knows it’s great. Since Machu Picchu gets around 3,300  visitors per day, you can get there early, take the last bus, visit in the low season, go on a rainy day, or even go on Christmas, and still never get solitude. But if you find yourself longing for a quieter more adventurous experience, there are a few alternatives to Machu Picchu (and even one REALLY GOOD one) you can visit instead. Ever heard of some ruins called Choquequirao?

Choquequirao is also an Inca site in Peru with terraces, temples, plazas, and aqueducts. But unlike Machu Picchu, it’s hidden away high in the Vilcabamba mountain range. It’s relatively unknown and tough to get to. This means that only 15 to 20 visitors make it to Choquequirao each day. And having Inca ruins to explore all by yourself? Well, that’s pretty damn awesome.

Wanna go? Below you’ll find everything you need to know for visiting Choquequirao in Peru including the history of the site, a comparison of Choquequirao vs Machu Picchu, plus info for undertaking the Choquequirao trek.

Machu Picchu is the big one. It’s a UNESCO Heritage Site and one of the New 7 Wonders of the World for a reason. The citadel sprawls 325 km2 and there are 172 campuses.

Machu Picchu is huge, brilliantly restored, and genuinely impressive. This also means its crowded year-round. Even if you don’t mind the crowds, visiting a site of this notoriety has downsides. It’s expensive, time-consuming to get to, and a high-impact site to visit. 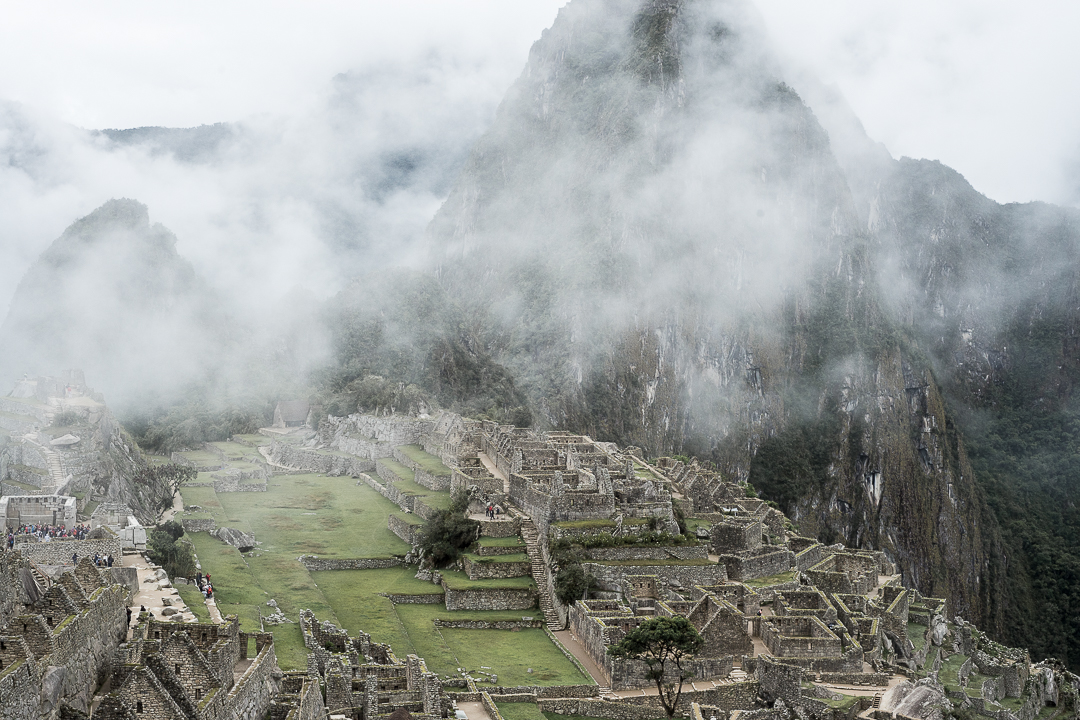 Short on time or budget? Read this post as you consider if Machu Picchu is worth it to you.

The Choquequirao ruins are often considered “the next Machu Picchu”. The ruins are already 6 km² though they’re just 30% excavated. There are 12 sectors including temples, residences, warehouses, chambers, farming terraces, and an elaborate irrigation system that was incredibly sophisticated for the time. The site is also famous for the literally named llama terraces, 24 white llamas carved from stone on the side of the mountain. And it’s picturesquely located on a narrow ridge in the Vilcabamba range some 3,000m high.

All the pros and cons of visiting Choquequirao are implications of it being lesser-known. It’s less expensive to visit, lower impact, and less crowded. The drawbacks are that it’s out of the way, the Choquequirao trek is genuinely tough, and the tourist infrastructure is lacking. It’s also not a big name site like Machu Picchu. 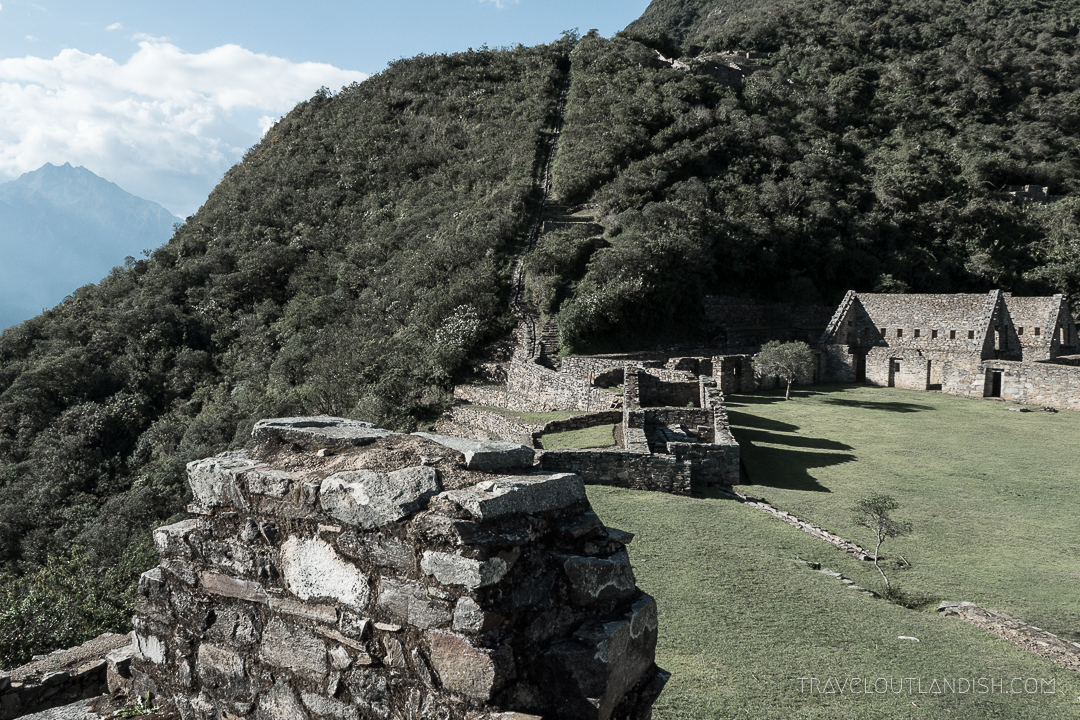 Not sure if you can handle the trek to Choquequirao? You might also like these 3 Excellent Alternatives to Machu Picchu.

A Guide to Exploring the Inca Ruins of Choquequirao

Choquequirao is a 15th and 16th-century settlement of the Inca Empire. While much of the site’s history is speculative, the general consensus is that it was built between 1418 and 1471 under the Sapa Inca (Emperor of the Inca Empire) Pachacuti Inca Yupanqui. During that period, Cusco was growing into an empire, expanding throughout western South America. It is believed that Choquequirao was built as a checkpoint to Vilcabamba – the capital city and administrative hub of the Neo-Inca State. When Pachacuti’s son, Tupac Inca Yupanqui, succeeded him, the Incas remodeled and expanded Choquequirao to its current size. The site was supposedly abandoned around 1572 when Tupac was executed by Spanish authorities. 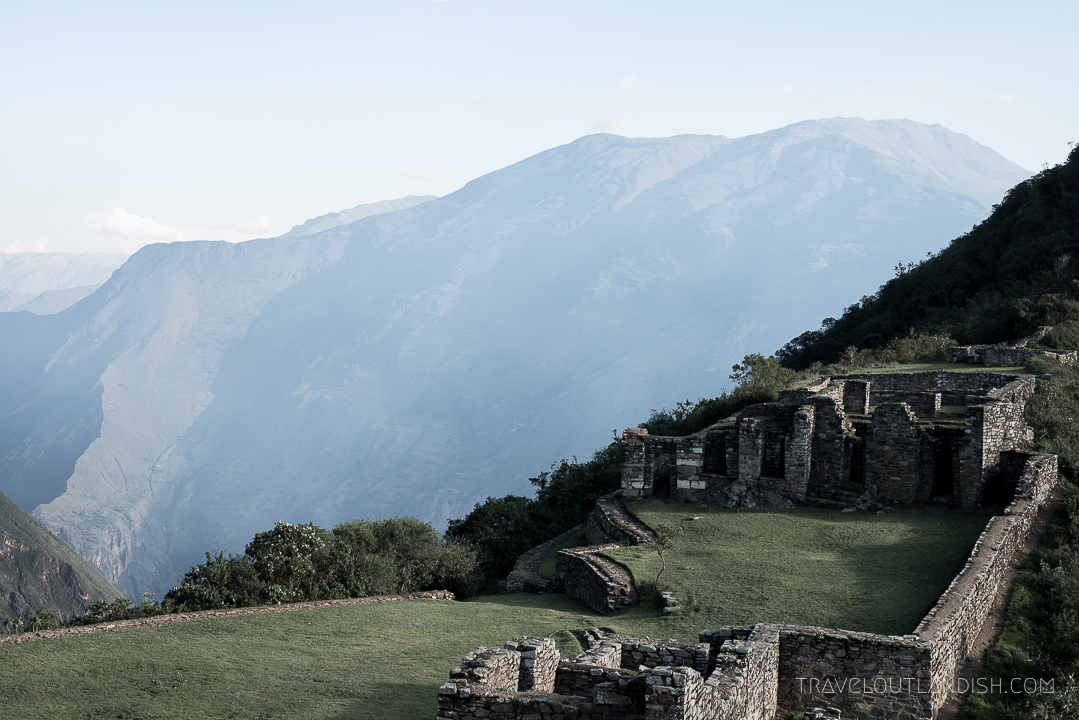 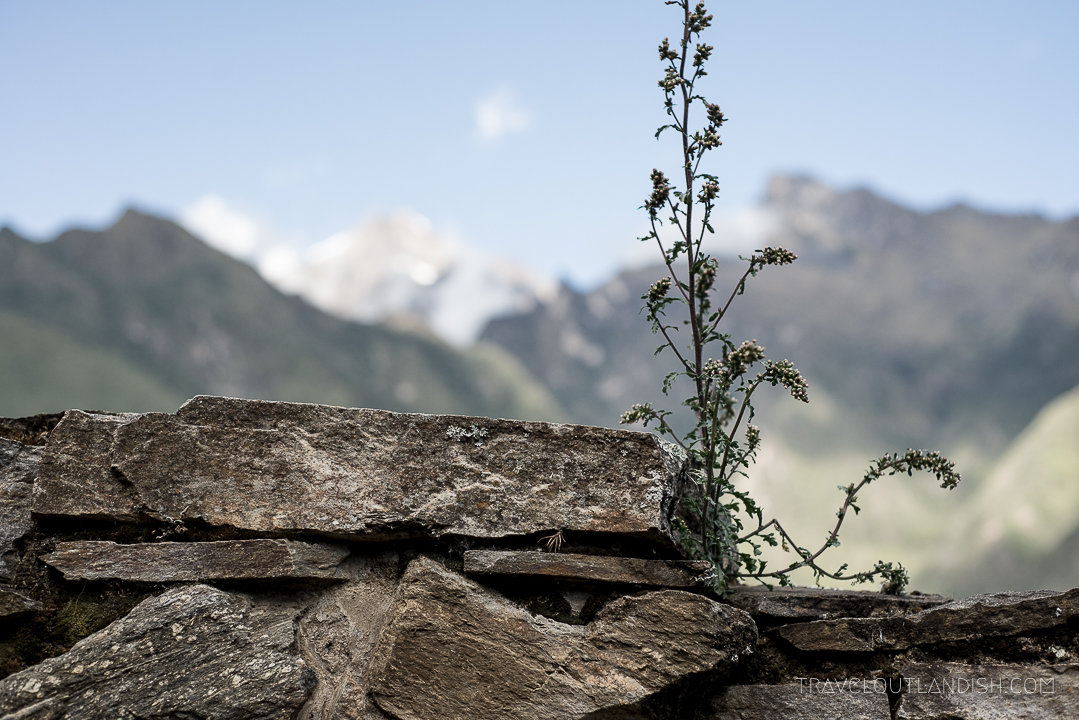 The site was rediscovered by Juan Arias Díaz in 1710 but dismissed after a search that yielded no precious metals. It was again visited by Hiram Bingham (the same guy who brought notoriety to Machu Picchu!) as part of his visit to the First Pan-American Scientific Congress in 1909. The purpose of his mission was to determine if the site was, in fact, Vilcabamba – the capital of the Neo-Inca state – as it allegedly was “the cradle of gold” where Inca treasures could be discovered. Turns out it wasn’t, but they proceeded with excavations anyway. 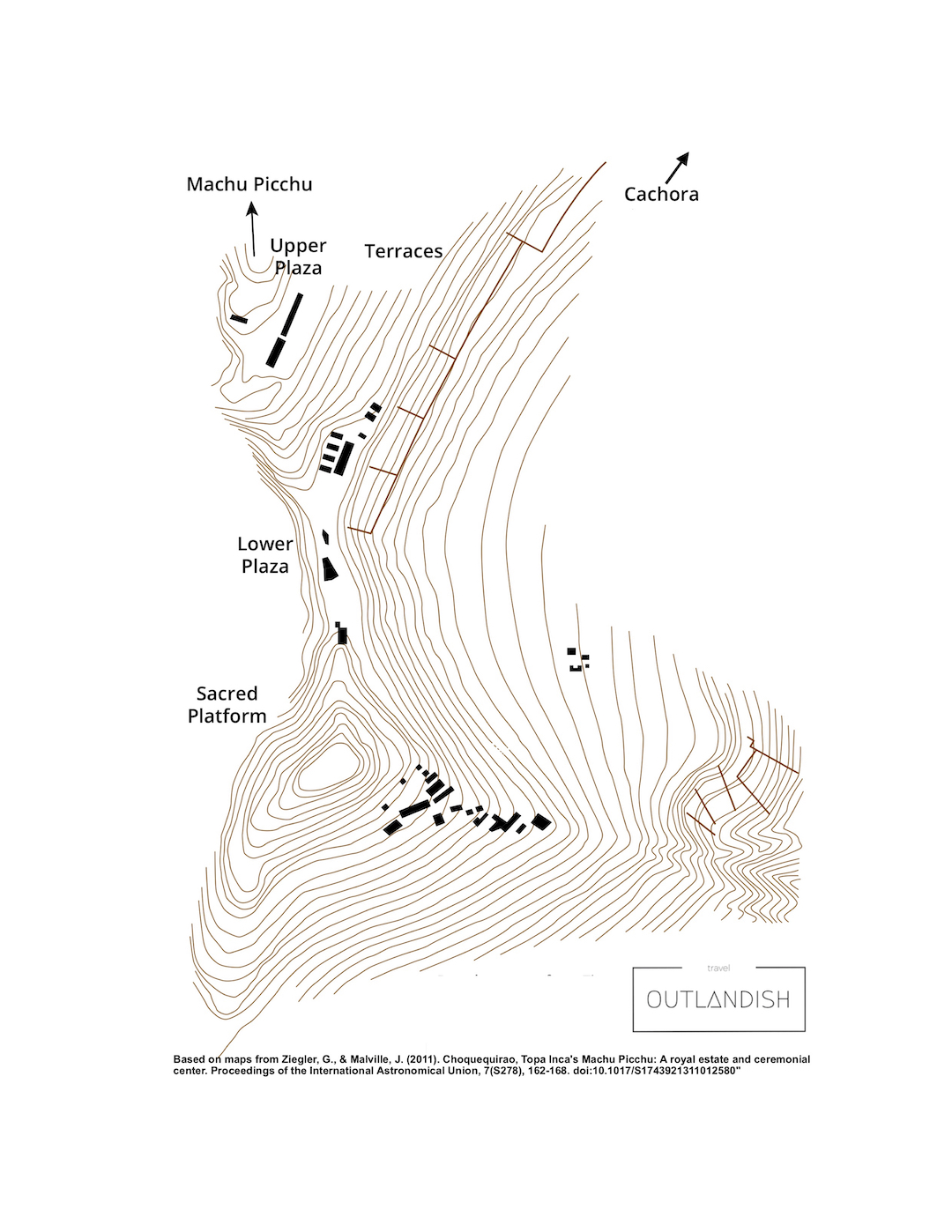 Years later, Choquequirao is still something of an unknown destination. As I mentioned before, that’s because the ruins are only accessible by the very tough Choquequirao trek, keeping them protected from mass tourism. In 2017, estimates placed the annual visitors to Choquequirao at around 5,800 (compared to 1.3 million at Machu Picchu). That said, the Peruvian government has announced an investment scheme of $80m aiming to develop roads and infrastructure to make the ruins more accessible.

There are currently plans in place to build a cable car that runs from Kiuñalla to Choquequirao, cutting what was once a multi-day hike into a 15-minute cable car ride. According to one article in The Telegraph, the project hopes to increase the annual site visitors to 150,000 in the first year, with ambitions of 500,000 yearly visitors over the long term. Anecdotally, I’ve heard the building of the cable car to Choquequirao has hit some snags and might take longer than expected.

It goes without saying Choquequirao could very well be “the next Machu Picchu.” If you’d like to go, go before the cable car is operational to really experience the place with all of its magic. 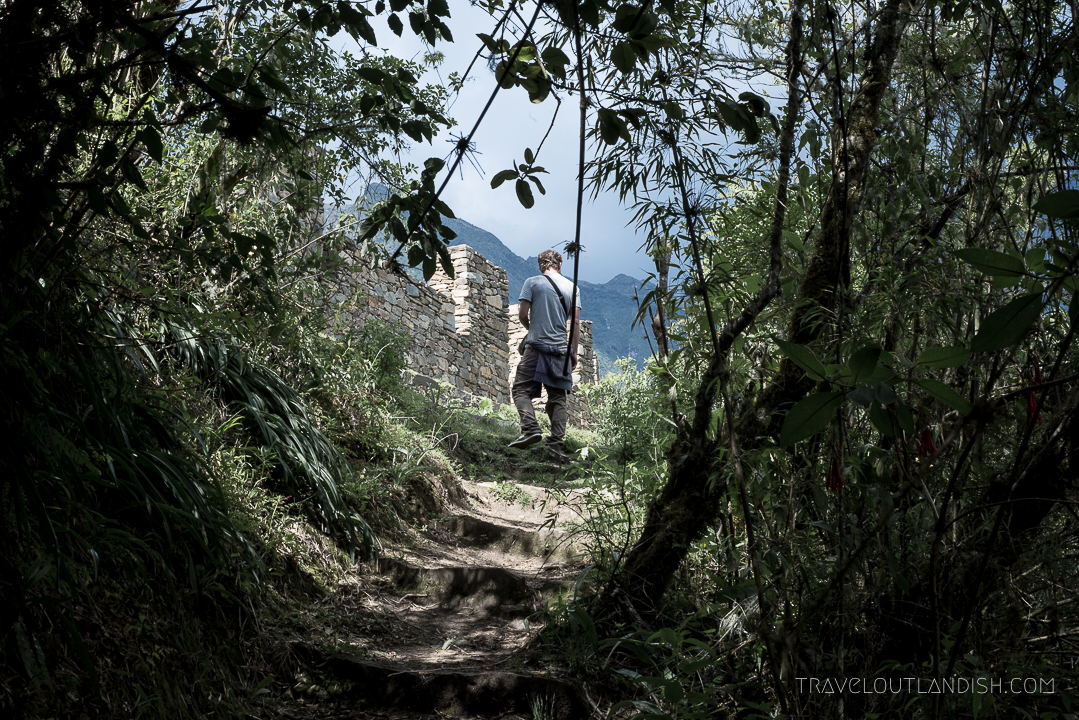 A cable car to Choquequirao is under construction, but it’s currently only accessible by a very tough hike. The Classic Choquequirao Trek is a four-day out-and-back trek to the Choquequirao ruins via the Apurimac Canyon.  You can extend it to a nine-day through-hike when you continue from Choquequirao to Machu Picchu.

While the trek is low altitude, it’s not easy by any definition. Much of the trail involves steep climbs or descents, and tree cover is limited. At some times of the year, the hike is buggy or met with inclement weather. But struggle through the tough parts, you’ll get to experience one of the best lesser-known experiences in all of Peru.

Ready to plan the Choquequirao Trek? Here’s everything you need to know about Choquequirao trekking routes, campsites, and trek costs.

Where to Stay in Cachora

Need a place to stay before your trek? There are just a couple of hotels in Cachora.

Inka Dream | When I stayed, there wasn’t much dreamy about the Inka Dream. That said, recent reviews describe it as friendly, and family-run. Double rooms start from $40. 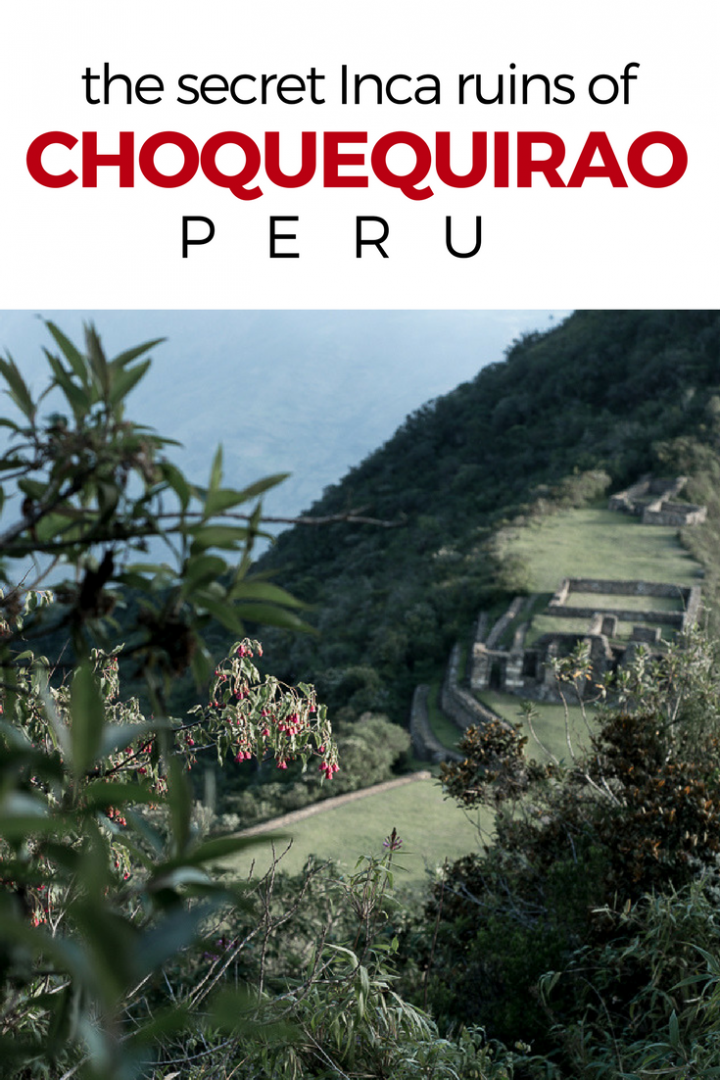 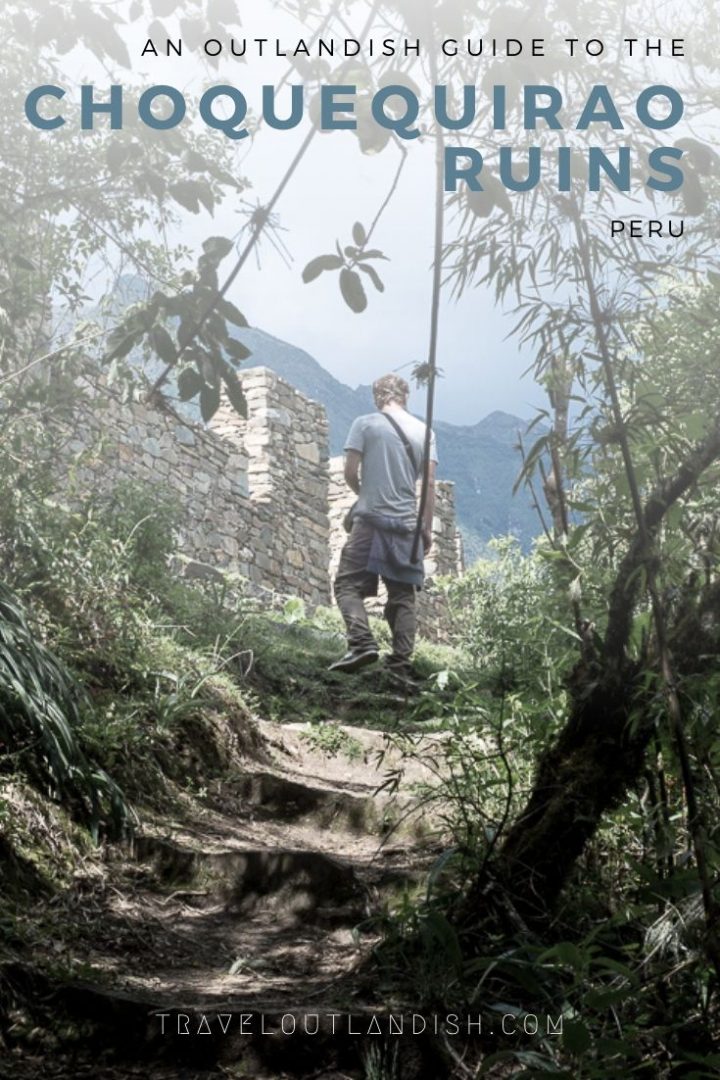 Have questions about visiting Choquequirao in Peru? Let us know in the comments below!