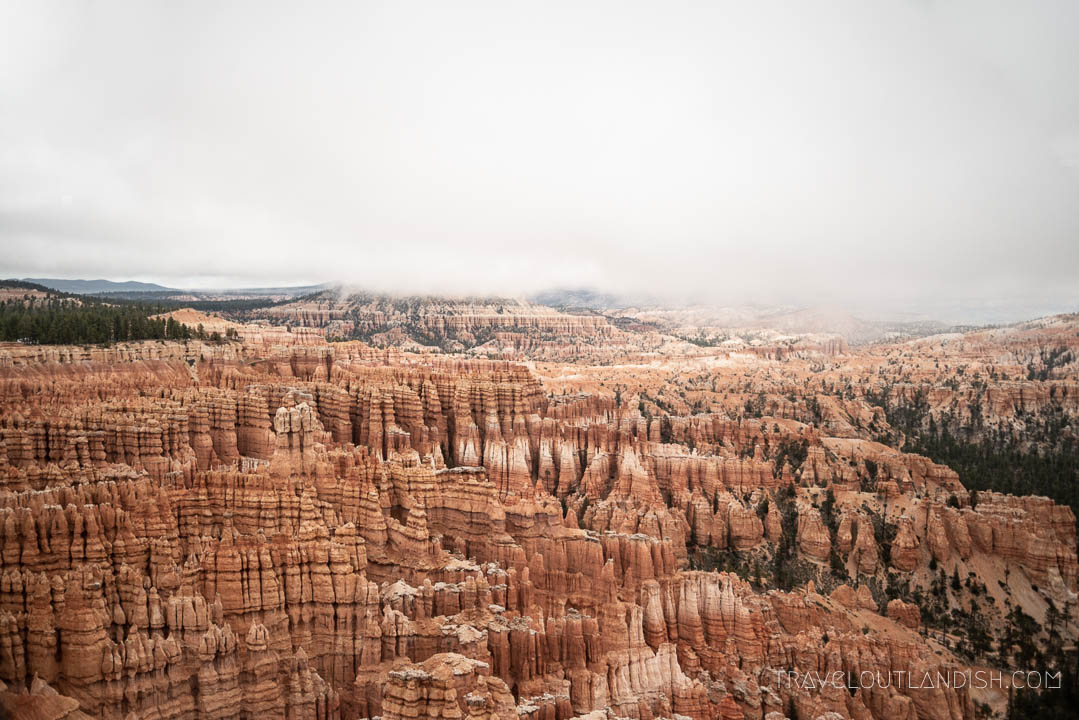 When it snows in April, you’ll watch fire-colored hoodoos disappear into thick piles of snow. Sharp fins climb out from the earth, slowly eroding with time. Descend into the canyon on the Queen’s Garden Trail, a path made of slick mud that turns marigold with the spring rains. Camp beneath the foggy skies. Hike across the barren landscape – one that seems almost post-apocalyptic – of sparse trees and loose piles of rock. It looks like an abandoned mine, only it’s what nature has created. It’s an in-real-life theme park. Whimsical and otherworldly. Even when compared to incredible places like Zion and The Grand Canyon, it stands out as the one-and-only Bryce Canyon National Park.

Bryce Canyon is pretty tiny and often visited on a day trip from Zion National Park. But it’s worth adding to your Utah parks road trip all on its own. Want to know more about Bryce Canyon hiking, camping, and what to see? Here’s an outlandish guide to one of the strangest US National Parks there is.

Bryce Canyon National Park is one of the smaller parks in Southwestern Utah at 88km². It’s not actually a canyon at all, but an 18-mile plateau. Bryce is known for its large concentration of hoodoos – thin rock spires –but there are also balancing rocks, bridges, spires, slot canyons and just about every other kind of rock formation you can imagine.

Entrance to Bryce Canyon National Park costs $35 per vehicle, $30 per motorcycle, or $20 per individual (by foot, bicycle, park shuttle bus, railway, raft), but if you’re planning to visit 3+ National Parks, you should consider buying the America the Beautiful National Parks Pass ($79) which includes access to all US National Parks and Federal Lands.

Plan ahead! All Bryce Canyon camping is first-come-first-served for 2019. You can book backcountry permits 48 hours ahead of time at the wilderness desk.

Bryce Canyon is small but mighty. There are just a handful of Bryce Canyon hikes and even fewer backpacking routes, but countless places that will blow your mind. Most things to do can be experienced in a day or two, but you’ll enjoy it more if you take it slow. Let yourself wander to fully experience Bryce Canyon. Here are some of the highlights.

Some of the most popular hiking in Bryce Canyon – Navajo Loop, Queen’s Garden Trail, and the Rim Trail – can be knocked out in under three hours. Even Fairyland Loop and Peekaboo Loop can be completed in under five!  But if you’re keen on a longer hike, there are two backpacking routes in Bryce Canyon, too. Find out more about the Under-the-Rim Trail and Riggs Spring Loop Trail in the “Backpacking in Bryce Canyon” section below.

The rim of Bryce Canyon sits at between 2,400m to 2,700m elevation, meaning winters are unexpectedly long. Rather than having your trip snowed out, you can consider incorporating some snow into your trip! Bryce in winter can be seriously beautiful.

Cross-country skiing and snowshoeing is common on sections of the Rim Trail and on the unplowed Fairyland Road and Paria View Road. From November through March, the park hosts Ranger Guided Full Moon Snowshoe Hikes (see the schedule here). Even hiking and backpacking are possible in Bryce Canyon during winter if you have the right gear! Since winter travel is highly dependent on conditions, be sure to contact the Bryce Canyon Visitor Center before planning anything.

About 50 million years ago, Bryce was completely underwater. What you see today was formed by the rising Colorado Plateau and other tremendous forces of nature. Even still, the rock formations are constantly eroding and changing. You don’t have to be a geologist to find impermanence on that scale amazing.

Some of the most impressive things to see at Bryce are Silent City, Thor’s Hammer and Queen Victoria. The formations are most often named after whatever they look like and spotting them out can be pretty fun. But even the no-name rock formations are something else. Go off on any of the trails without a destination in mind. You’re sure to find something interesting.

Because Bryce is small and has oft-erratic weather, there are really just two backpacking routes: the Under-the-Rim Trail and the Riggs Spring Loop Trail. Here’s more information about each of these backpacking trips.

The Under-the-Rim trail is a 37km hike that wanders under-the-rim (obviously) between Bryce Point and Rainbow Point. It’s typically hiked in three days, but the trail can also be broken into shorter sections for a shorter hike. As you change elevations, you’ll watch the trees change and wander through the evolving landscape. It’s mostly meadows and forests rather than views, but you’ll see parts of the park that everyone else misses. You can expect thunderstorms and snow all year long, so come prepared and check for trail closures before planning your trip. You’ll also need to travel with a bear canister. There are 8 backcountry sites on the Under-the-Rim trail. Permits are required to camp at Right Fork Swamp Canyon and Natural Bridge campsite available at the visitors’ center for $5.

The Riggs Spring Loop Trail is a 14km loop that starts and finishes at Yovimpa Point. It wanders through some of the conifer forests of Bryce and while there are fewer hoodoos, you can’t beat the quiet. You can knock out the Rigg Spring Loop Trail in a day, but there are 4 backcountry campsites available if you want to overnight it. Permits are required and can be purchased for $5 at the visitors’ center.

How to Get to Bryce

Unfortunately, the only way to really get to Bryce from there is by private vehicle. Greyhound and Salt Lake Express run regular buses from Salt Lake to Parowan, but you’d still need a car to take you the last 120km. Your other option is to book a tour that includes transport from a major city. 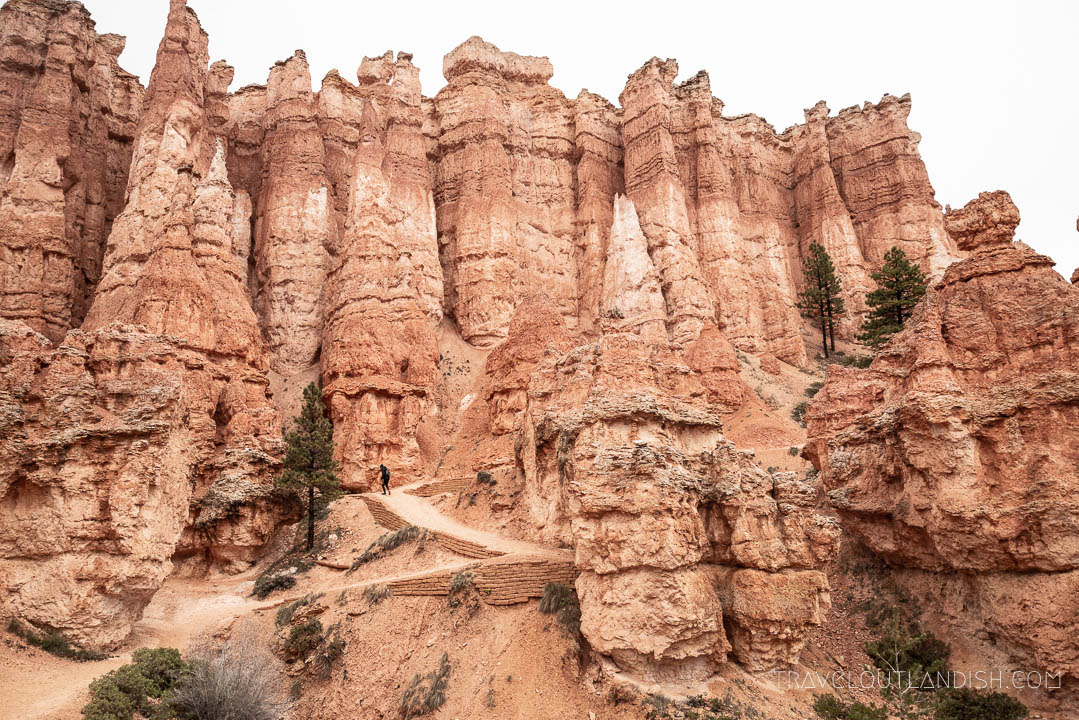 Getting Around the Park

It’s also pretty tough to get around Bryce Canyon National Park without a private vehicle. There’s a shuttle service to major trails and viewpoints that runs from April to October. Otherwise, you’ll need a car, motorcycle, or bike to get around. You can find more information about the South Rim Free Shuttle Bus Routes on the NPS site.

There are two campgrounds in Bryce with about 100 sites each and the Bryce Canyon Lodge. There are also plenty of places to stay in nearby Bryce Canyon City.

For the 2018-2019 season, campsites are first-come-first-served. During summer, they fill up daily.

North Campground | North Campground has 99 sites along four loops for RVs and tents. The sites are close together but nicely situated under the trees. Each site comes with a picnic table and firepit, and paid shower and laundry are available. Stay on the outer loops for sites with more privacy. Sites from $20 per night, pay at the kiosk upon arrival.

Sunset Campground | Sunset Campground is south of the Visitors’ Center and has 100 sites along three loops. Sunset also has firepits and a picnic bench, but amenities are more basic than those at North. Sites from $20, pay at the kiosk upon arrival.

Airbnb | Want something a bit more interesting? There are a few yerts and rustic cabins within a quick drive of Bryce National Park. New to Airbnb? Get $40 off your first stay or explore other properties from $50.

Have any questions about Bryce Canyon hiking or camping? What about other things to do? And if you’re traveling in Utah…