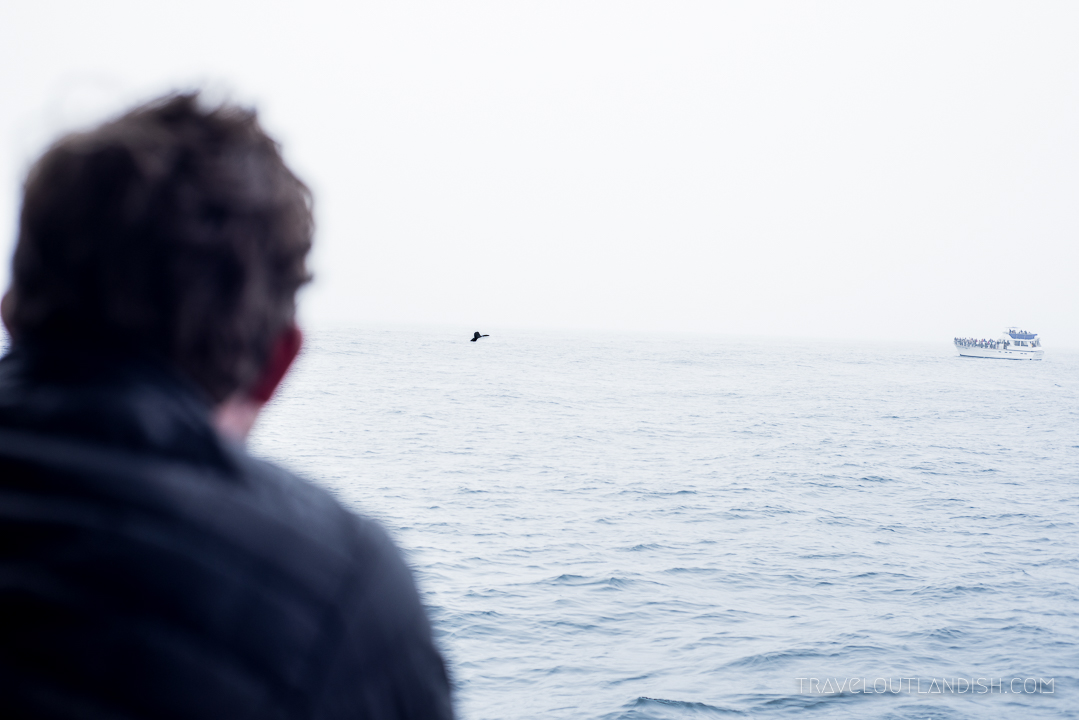 Blue whales are the largest mammal ever known to have lived on Earth. They can stretch up to 100 feet, weigh more than 200 tons, and spout water some 9 meters in the air. Can you just take a second to imagine that? Then, picture this massive creature appearing on one side of your tiny little whale-watching boat, going under, and popping up on the other a minute later. It’s perspective. A glimpse at how small we really are and the delicate balance we have with nature. And that’s good enough reason to go whale watching in California.

After 4 years of living in San Francisco, I still hadn’t made it to Monterey.  But when it came time for a California road trip – national parks, coastline, endless roads, and roadside attractions – whale watching in Monterey was definitely in the cards.

With more than 27 species of whales and dolphins that visit every year, whale watching in Santa Barbara is an awesome way to spend your vacation.  The best time to go whale watching in Santa Barbara is between mid-December and April (gray whales) to see gray whales making their northward migration, but you can also see whales between May and November (blue whales, finback whales, and humpback whales).

While Orange County may be best known for its TV namesakes, Newport Bay supports a thriving ecosystem with all kinds of marine life. With permanently clear skies and waters, you can see the whales really close here. The best time to go whale watching in Newport is similarly between December-March (gray whales) but you can also go between April-November.

Just off the coast of San Diego, you can spot whales on the final stretch of their journey from Alaska to Baja. The best time to go whale watching in San Diego is Mid-December – April (gray whales) and mid-June to September (blue whales). And if you’re not keen to plan a whole vacation around whale watching, you’ll be glad to know there are tons of other things to do in San Diego, too.

Monterey Bay is California’s hub for all things aquatic. You can go out for a whale-watching excursion year-round and expect to see migrating whales, plus tons of resident marine life like turtles, sea lions, and sea otters. The best time to go whale watching in Monterey is mid-December through mid-April (gray whales, dolphins, and orcas) or mid-April through mid-December (humpbacks, blue whales, dolphins, and orcas). This is where I ended up going, and you can read more about whale watching in Monterey below!

Monterey Bay is known to have some of the most biodiversity in any temperate region. The waters are rich with a variety of marine life ranging from otters to elephant seals to humpback whales. Here’s a bit more about my experience whale watching with Monterey Bay Whale Watch, plus a few recommendations for the best-rated operators in Monterey.

Chris’ Fishing and Whale Watching (perhaps obviously) specializes in both fishing and whale-watching tours. They claim to have the oldest charter company on the peninsula and the most experienced skippers in Northern California. Probably the best part is that their boats are a bit smaller so you won’t feel crowded. Read reviews for Chris’ Fishing & Whale Watching here.

We headed out on a morning departure with Monterey Bay Whale Watch. The trip started off at 9 am and we got tossed by the waves for about 90 minutes before getting to our whale-watching spot – Submarine Canyon. The naturalist promised we would see whales, but we saw a blue whale sooner than I could have expected. It was some ~82ft long, and we watched it come up for air and dip down beneath the water for a while before it suddenly disappeared. Over the course of the tour, we saw at least a dozen more blue whales, gray whales, and humpbacks. If you’re looking to plan a whale-watching trip in Monterey, here are a few details about tours with Monterey Bay Whale Watch.

When: Whale-watching tours are 4 hours or 8 hours and depart a few times a day. The first departure is around 9am. Wildlife tends to be the most active in the early morning and evening – get an early start to have the best experience!

Cost: $51 for a half-day and $125 for a full day. Discounts are common, so check Groupon and similar sites before booking!

Where do you think is the best place for whale watching in California? Thanks again to See Monterey for hosting our visit!