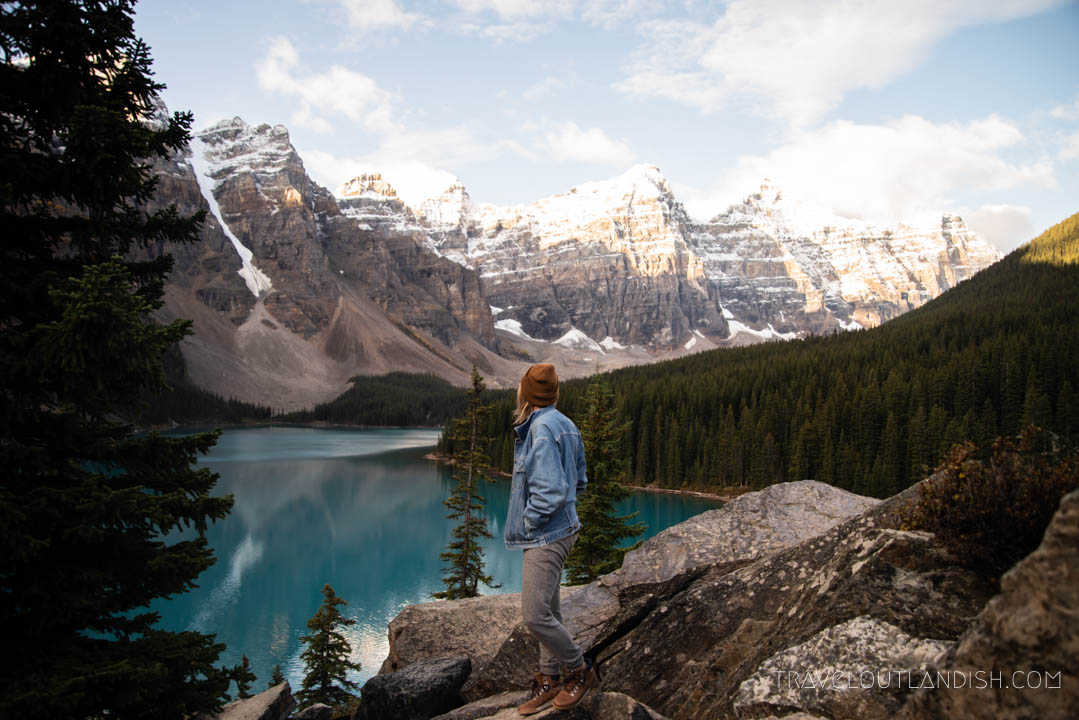 Lake Louise. You know it, don’t you? The legendary, oft-Instagrammed glacial lake in Banff National Park?  The lake that glistens like a turquoise mirror unbroken by wind or waves? With the pine-covered mountains cascading gracefully down to a perfectly centered valley over the water?

It’s the lake where blonde girls with impossibly good hair wear their 5-panel hat for the second time since Coachella. Where golden retrievers reluctantly teeter on the nose of a canoe and the owner calls them an #adventuredog. Where lads on tour button up their flannels and gaze into the distance, very much claiming it was candid. It’s a lake where a whopping 823,532 visitors decided to throw #lakelouise on it and watch the likes roll in. 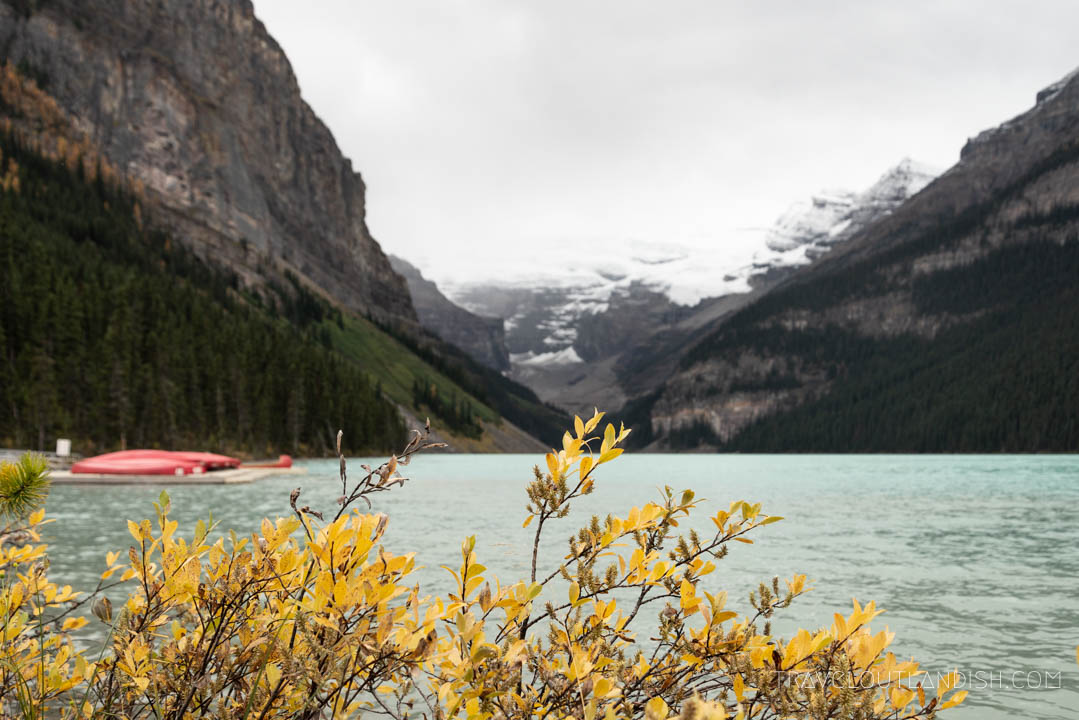 And while Lake Louise is an ABSOLUTELY FANTASTIC feat of nature, it definitely isn’t the only lake in Banff (or the nearby parks, for that matter) worth exploring.

Whether your hair is matted hair from a few days of camping, you left your dog at home, or you just want to check out a less-crowded alternative to Lake Louise, here are some of the best lakes in Banff & Yoho that give Lake Louise a run for its money.

Peyto Lake is another of Banff’s especially turquoise lakes that is far less crowded than Lake Louise. The glacial waters flow in from Peyto Glacier via Peyto Creek.

While you can spot Peyto Lake from the Icefields Parkway on a pull-off, there’s another viewpoint 3km out that far fewer people know about. From the Bow Summit parking lot, find the sign directing you to the Peyto Lake Viewpoint. Bypass the first wooden viewing platform, continue uphill, and go counterclockwise on the main path to the upper viewpoint. This is a sneaky spot that most onlookers skip and well worth the extra (short) walk. I don’t have a picture since the Peyto Lake viewpoint was closed for construction during our visit,  but it’s supposed to be lovely! According to Parks Canada, the entire area will stay closed from spring 2020 until winter 2020 for improvements on facilities, viewing platforms, and trails. Exact dates are weather dependent, so check before your trip for updates.

Getting there | Peyto Lake is 45km north of Lake Louise and is most often seen from above while driving up the Icefields Parkway. That said, it is also possible to hike down to the lakeshore on the Caldron Peak Trail. You can also visit it as part of the Wapta Icefields hut-to-hut traverse with overnights at Peyto Hut, Bow Hut, and Balfour Hut.

Moraine Lake is just a short 15km from Lake Louise which is perhaps the same reason it’s such a good alternative. Moraine is by no means unknown, but a tiny parking lot and indirect shuttle system have spared it some of the crowds that bombard Lake Louise.

Moraine Lake is glacially fed (like many of the best lakes in Banff), but trust me when I say you’ve never really seen any lake so deeply blue. Like other glacial lakes, the color is derived from glacial melt off and a high density of sediment that helps the lake absorb the blue from the sky. 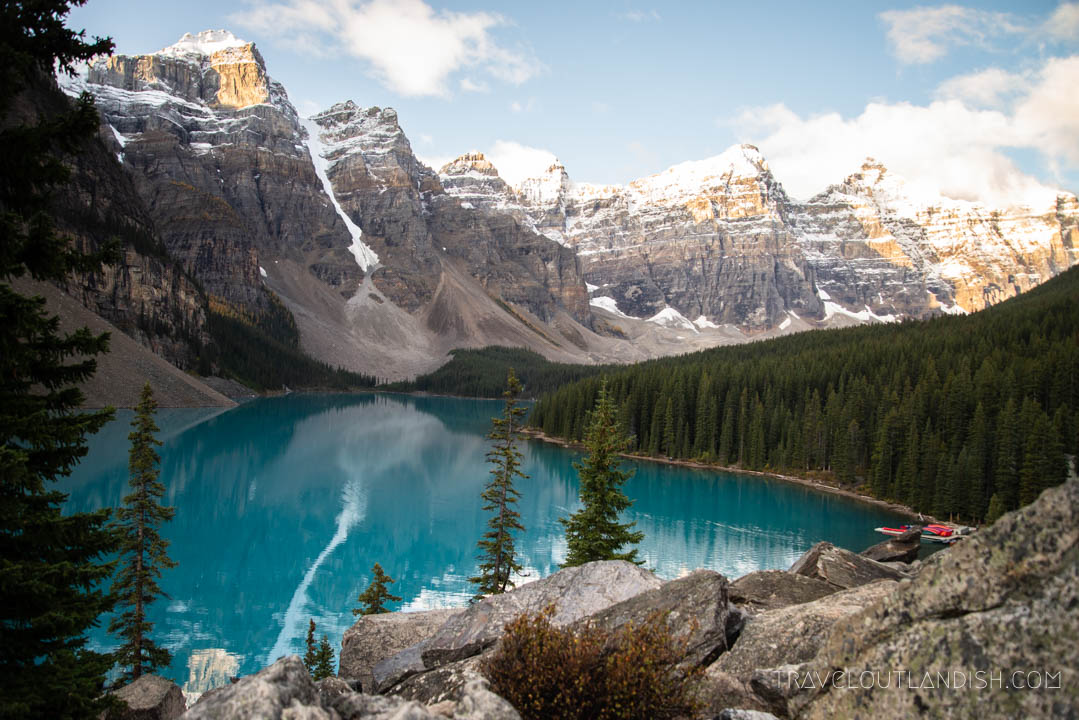 And the most awesome part is its location in the Valley of the Ten Peaks. Unsurprisingly, the area is named for the ten peaks taller than 3,000m that provide a seriously scenic backdrop to the lake.

You can rent canoes for a [very steep] $120 CAD per hour. Moraine Lake is also the starting point for some of the best hikes in Banff like Sentinal Pass or Wenkchemna Pass, or some easier hikes like those to Consolation Lakes or Eiffel Lake.

Getting there | Moraine Lake is 15km south of Lake Louise. Since Moraine is still quite popular, you should get there super early for the best experience. The parking lot fills up before sunrise – we got there at 5:30 to park in the lot – but a more efficient way to get to Moraine is to take one of the shuttles. There are direct shuttles that run on the half-hour from 6:00 am – 7:30 am, and indirect shuttles via Lake Louise that run all day.

Parks Canada now has a shuttle between late May and mid-October that visitors can reserve in advance. More info on the Parks Canada shuttles here. 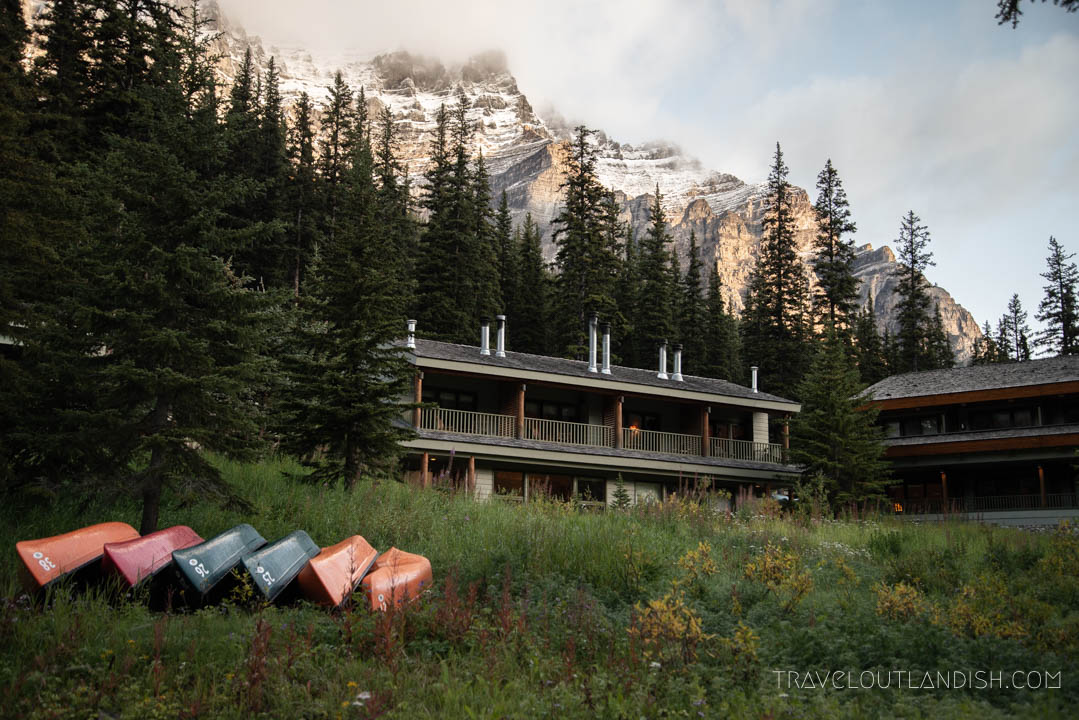 Lake Minnewanka is also a glacial lake in Banff (seeing a theme?) and it’s kind of THE spot for summer and winter sports. Since it stretches 21km and runs 142m deep, it’s incredible for kayaking, canoeing, fishing, and even scuba diving in the summer. It’s also the only lake in Banff which allows powerboats if you’re into that kind of thing. During the winter, it’s a known destination for snowshoeing, ice skating, and cross country skiing.

While the beauty of Lake Minnewanka isn’t quite as stark as that of Lake Louise, you have a lot more space to roam. Get out on the water, go for a hike or backpack around the lake on the Lake Minnewanka trail for the best experience.

Getting there | Lake Minnewanka is located outside of Banff town about 70km southeast of Lake Louise. It’s a 15-minute drive, but the large parking area is often full. There’s also a bus that departs from Banff High School to Lake Minnewanka between June and September. You can find info on that route here.

While neighboring Banff gets all the attention, Yoho National Park is every bit as pretty. Emerald Lake is surrounded by a ring of mountains that encircles the lake and has the menacing Mt. Burgess towering 2,599m above.

Aptly named, Emerald Lake is also brilliantly turquoise. And while it’s the busiest point of interest in Yoho, it still sees nowhere near as many tourists as Lake Louise. 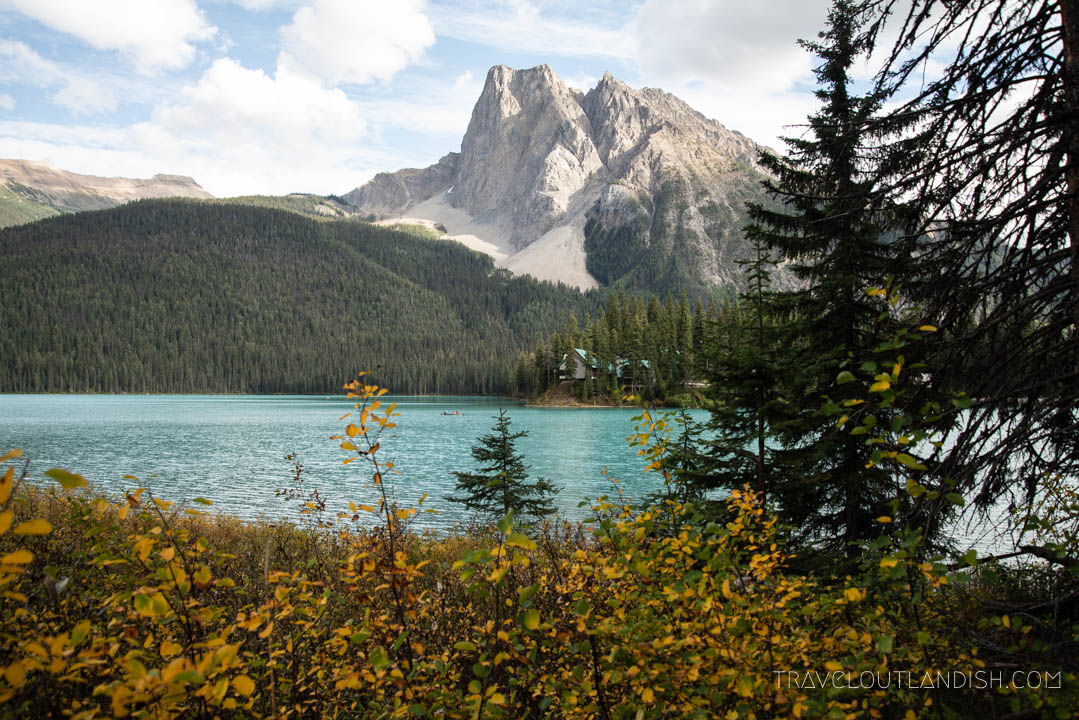 There is a 5.2km walking trail that runs through the forest around the periphery that is great for a trail run or easy walk. Go counter-clockwise and you’ll only face tour groups at the end! Emerald Lake is also the beginning of awsome hikes like Emerald Basin, Yoho Pass, & Hamilton Lake.  Canoes rent for $70 CAD per hour.

Getting there | Emerald Lake is found in Yoho National Park, 38km west of Lake Louise. There aren’t currently any shuttles, so the only way to get to Emerald Lake is by car hire or private vehicle.

Emerald Lake Lodge |  While you’d probably expect any lakeside lodge in the national park to cost a fortune, Emerald Lake Lodge is a rare exception. Rooms are rustic, lodge-style (some even have a fireplace) but the real reason to stay here is the views. Rooms from $75. 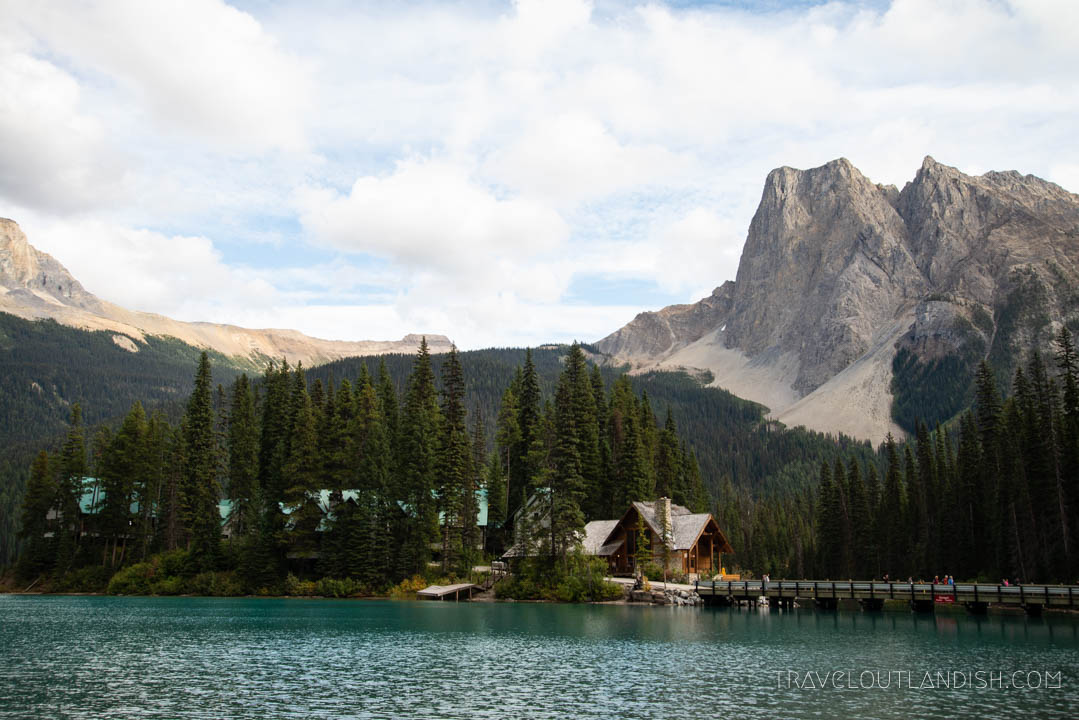 The most exclusive of all the lakes in Banff & Yoho is Lake O’Hara. The region is regarded for its alpine meadows, peaks upon peaks, and of course the stunning turquoise lake. It’s something of a backcountry paradise. But due to the fragile environment, it’s also heavily restricted.

It’s not possible to drive yourself, so the only ways in are a rather unscenic 22km roundtrip hike or a bus ride. And snagging a spot on the bus is damn near impossible (see details below) since there are just 42 day-use permits issued per day. You’ve got to plan early for this one. There are also a lot of permits available to anyone who has an overnight reservation at the campsite, backcountry hut, or lodge, so keep that in mind if visiting Lake O’Hara is a priority for you. I didn’t manage to get a spot, but I’ve heard that it’s worth it. If you’re planning a trip early enough to snag a spot to this Lake Louise alternative, you should move mountains to do it.

Updates for 2020: Overnight camping reservations are already sold out for the season.

Getting there | As of 2020, reservations for the bus to Lake O’Hara are issued on a lottery system. The lottery for 2020 is only open between February 1st – February 29th. It costs $10 to apply and you can apply for up to 6 days (apply here). If you manage to snag a reservation (the odds aren’t great!), you’ll have two weeks to confirm your spot by paying for your reservation in full. Be sure to read the full details here before you apply! And the last note I’ll make is that if you’re flexible and lucky, there are sometimes cancellations early or late in the season that you can snatch up at the last minute. It never hurts to ask!

Lake O’Hara Lodge | You’re right to have high expectations for such an exclusive (and expensive) overnight stay. But most people claim Lake O’Hara Lodge really lives up to the hype. Accommodation is in simple lodge rooms or lakeshore log cabins, but guests rave about the friendly staff and (obviously) the location. Rooms from $730. 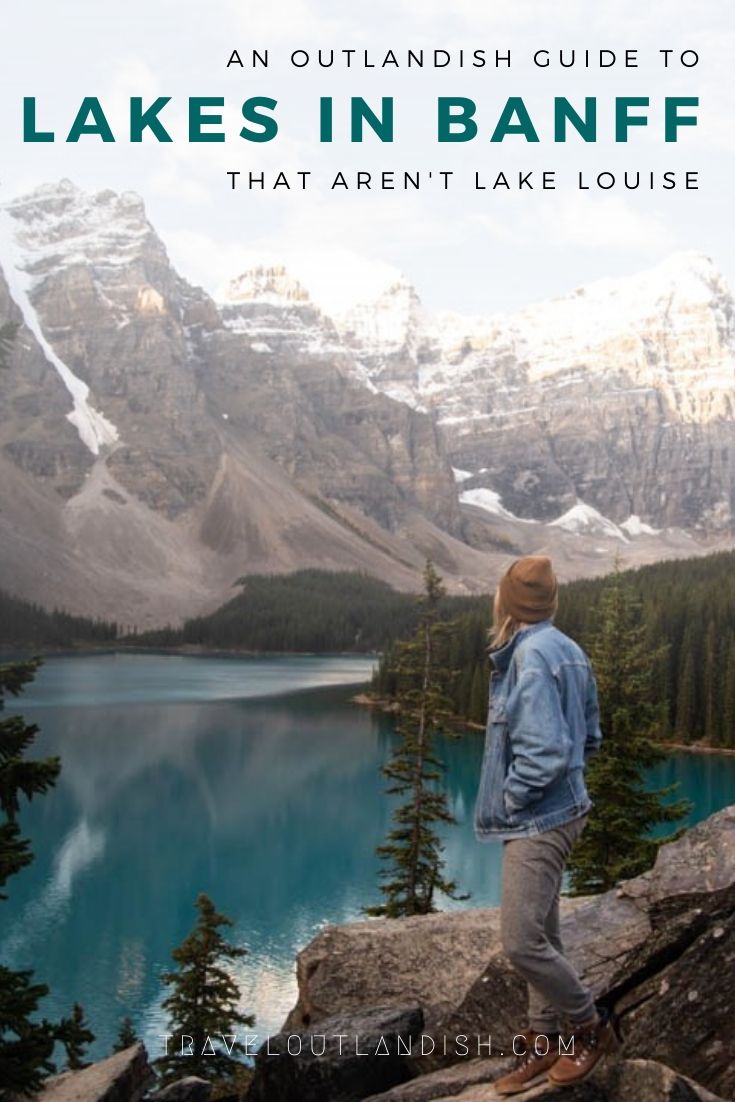 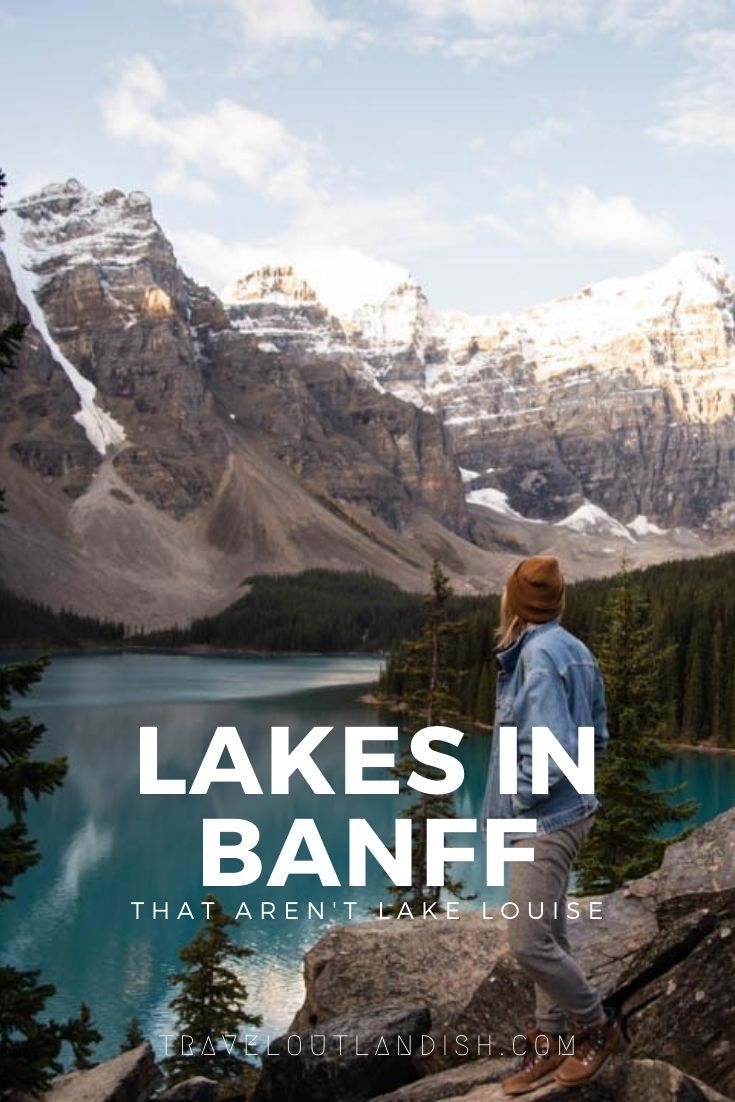 Any lakes in Banff or Yoho you think we missed? Share them with us in the comments.