8 Fun + Unusual Things to do in Paris | France 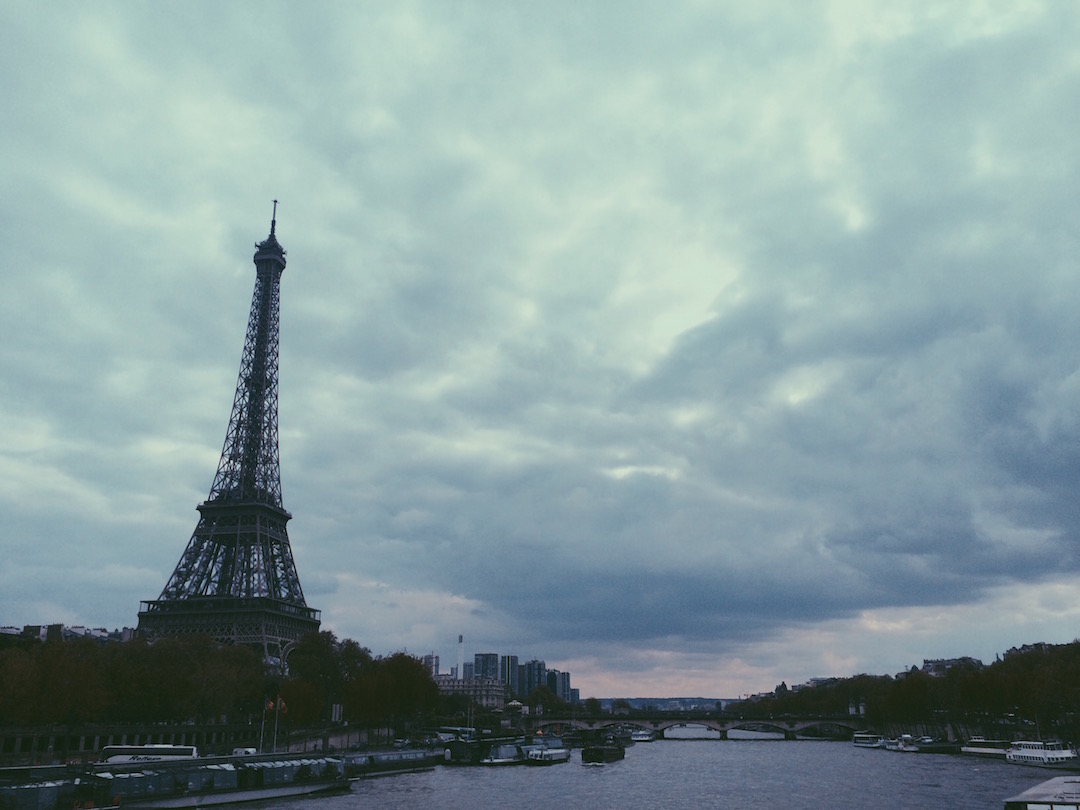 This post is in partnership with XL Airways, but all opinions are our own. This post contains affiliate links, but clicking through helps support Travel Outlandish at no cost to you.

The Eiffel Tower was alright.

Sorry – I’ll say it nicer. Perhaps the world has never known a landmark more iconic. For me, The Eiffel Tower was symbol of faraway places long before I could grasp that my grandmother’s house and France were not equidistant. Seeing it was of paramount importance on my first backpacking trip to Europe, but when I saw it in person? I was immediately sure that 81-stories of iron lattice were not the best that Paris had to offer. There had to be more immersive and unusual things to do in Paris. 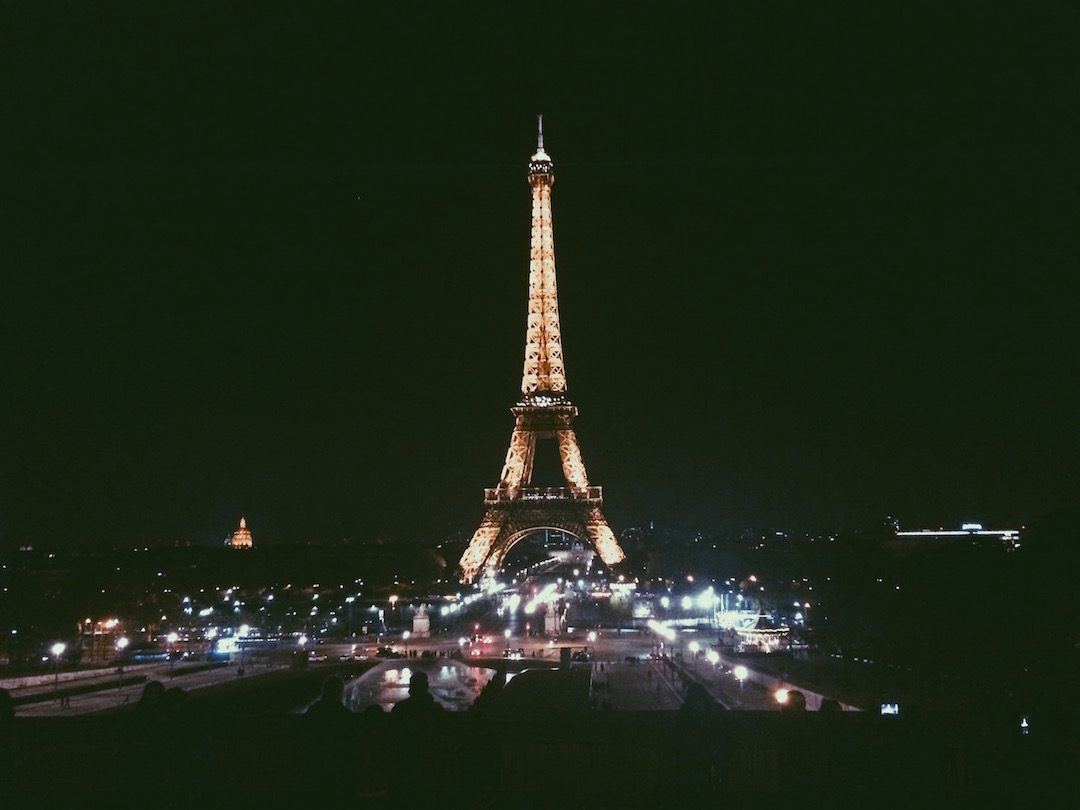 Some years later, I can hardly wait to go back and prove it. While it’s hard to find a good flight deal from the West Coast all the way to Europe, there are quite a few affordable European carriers. Take XL Airways for example. If you’re flexible on travel dates, you can snag round-trip flights from San Francisco (SFO to CDG) or Los Angeles (LAX to CDG) starting at $630. Their fares are inclusive of a free checked bag and an in-flight meal, but they keep costs down by itemizing the extra services we never use much anyway.

So how would you do Paris? I’d make a point to seek out quirkier locales. I’d learn a bit of French.  I’d definitely wear more attractive shoes. But most importantly, I would take in the smaller details this time. I’d really experience Paris.

8 unusual things to do in Paris

Paris is celebrated as the birthplace of the bikini, and with some of its emblematic pools dating back to the 1920’s, it is only appropriate to take a dip. For a glimpse at Paris’ bathing culture amidst remarkable settings, head to Piscine Josephine Baker or Piscine Georges-Vallerey. If you’re really looking to splurge, you may also snag a day pass (€180) to the historical, avant-garde Piscine Molitor.

One of the most fascinating unusual things to do in Paris is to visit the cemetery. As many of the world’s most legendary creatives lived and died in Paris, it’s no surprise that the cemeteries are similarly renowned. Explore Père Lachaise where you can find the grave sites of Jim Morrisson and Oscar Wilde among others. We’d also recommend visiting Cimetière de Montmartre, Cimitiere des Chiens, or Cimetière de Passy to wander past famous tombstones, but also to see the ornate mausoleums and imaginative sculptures throughout. 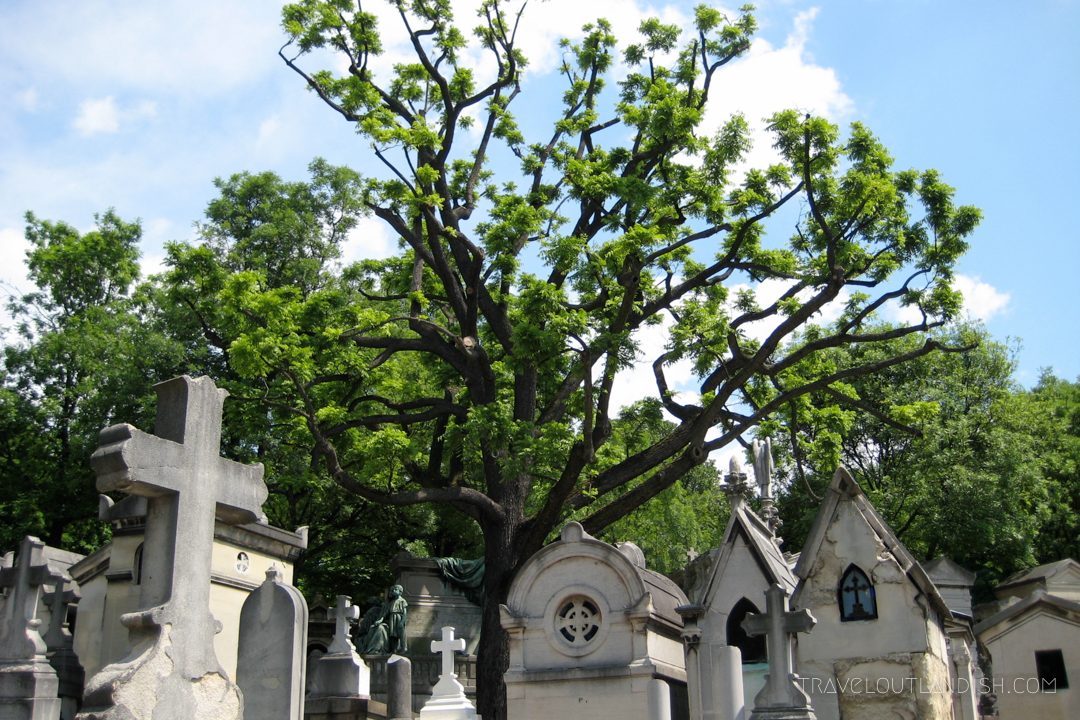 Parisian markets are every bit as romantic as you’d imagine. Get lost in the flea markets of Belleville, rummage through vintage decor, or scout out fresh produce at one of the city’s many farmer’s markets. Eat your way through Marché d’Aligre (€60) or clear your schedule for perhaps the most interesting market of all – The Paris Bird Market – where you can shop for pet birds and livestock alike.

4. Eating as the French do

French culinary tradition is undoubtedly one of the most influential and esteemed in the world. Why? Because French food is just so good. Tasting a French dish like escargot or coq a vin is an experience unto itself. If you’re traveling on a budget, pick up a baguette, a wedge of camembert, and a bottle of wine for the most epic of park days. Consider hopping on a gourmet food tour (€90) to learn the range of what is available, and don’t shy away from constant eating and drinking. 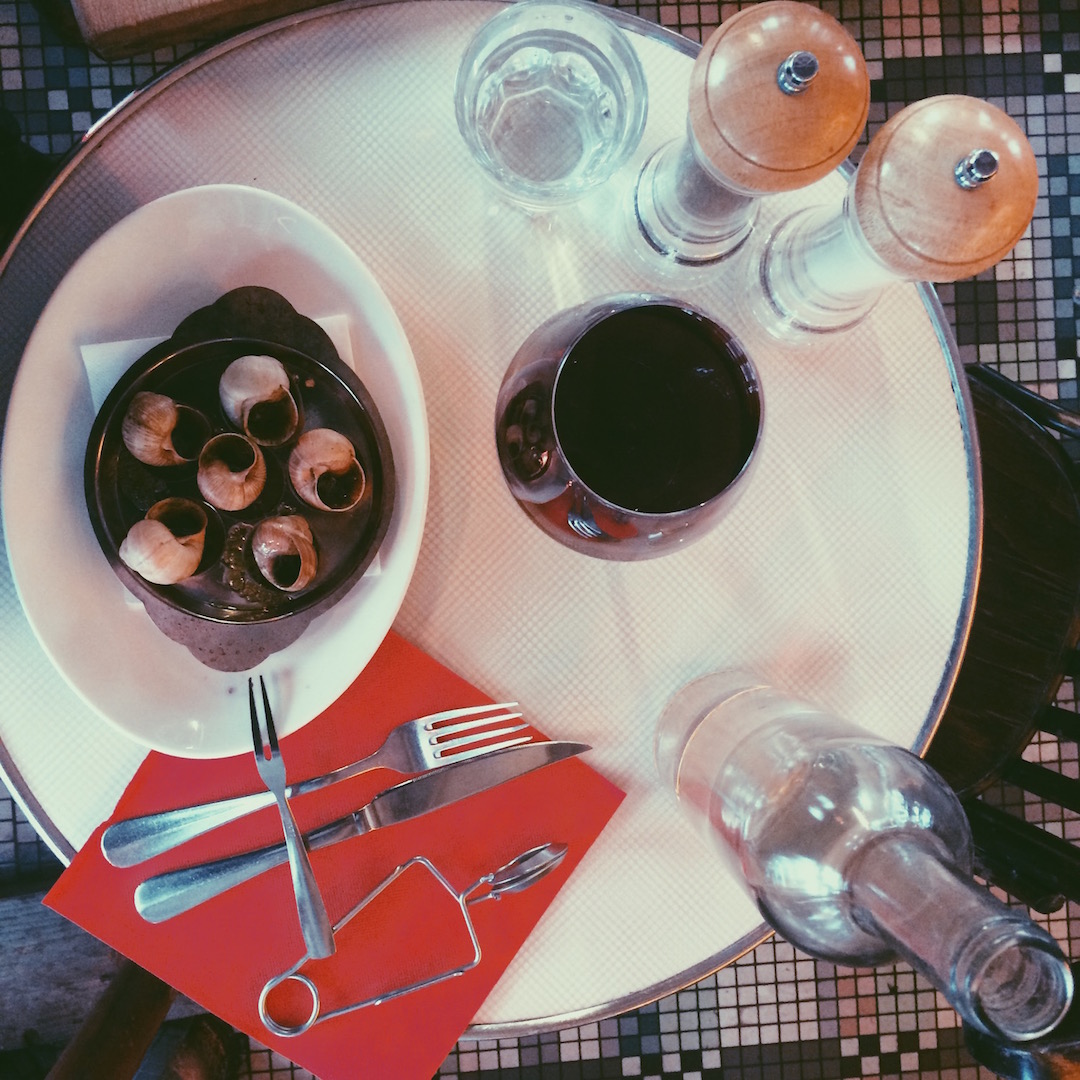 I’m always on the hunt for street art when I travel. It seems that where there is street art, there is also culture, art, and some delicious street food. In Paris, you can find street art on Canal St.-Martin. The surrounding neighborhood is home to young artists and university students, so head over for some prime people watching in Paris. Join in a street art tour of Paris for more insight on the movement and the impact it has had on the city (€25).

Dig street art? Me too! Check out our posts on street art around the world.

While the Louvre is Paris’ most beloved museum, there are plenty of places that pay homage to a more obscure part of the city’s history. We found that an overwhelming number of the unusual things to do in Paris involved taxidermy and other curiosities. Interested in Paris’ weird side? Head to Deyrolle Taxidermy for polar bears, wild cats, and a variety of birds that would hardly look dead at all if they weren’t amongst 19th-century decor. You may also be interested in Musée Dupuytren where you can find anatomical deformities recreated in wax, investigate jars of strange specimens, and learn about the fascinating evolution of medicine. Other spots to check out include the Statue of Death of the University of Medicine, Julien Aurouze and Co, and Musée des Arts Forains.

Want more weird? Check out the Outlandish series on our blog. 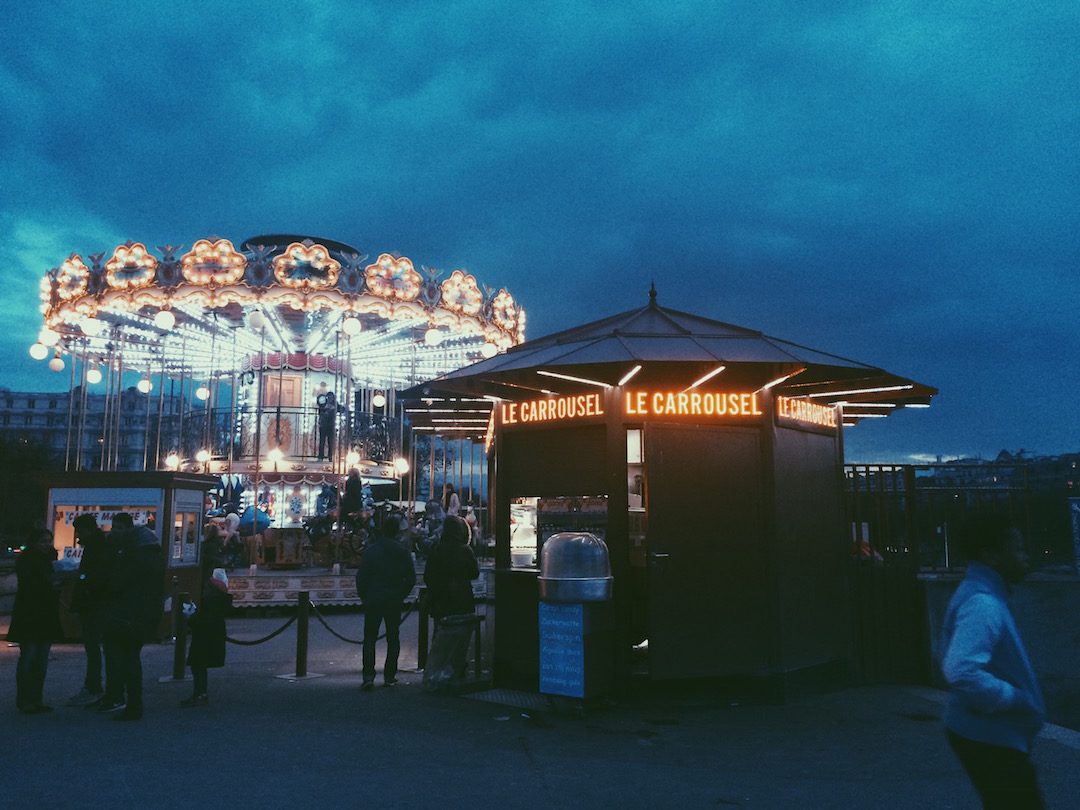 Paris has long inspired filmmakers and moviegoers alike. With the highest concentration of indie film houses anywhere in the world, you hardly have to try to catch a film in Paris. For a classic cinema experience, head to Le Louxor or Le Grand Rex. You can even get a behind the scenes tour and scope out the decor dating back to 1932 (€11). Finally, if you happen to be in Paris during the summer, you can also enjoy an outdoor film screening at Parc de la Villette.

View the city in full color by visiting Paris during Bastille Day, Quartier d’Été, or Gay Pride. We love festival travel because it draws people onto the street, breaks down barriers, and gives you one of the best opportunities for local immersion and cultural experience.

Into world festivals? Check out our post on 21 Weird + Unique World Festivals!

Unique Places to Stay in Paris

Looking to stay strange during your trip to Paris? Check out these quirky hotels in Paris:

Hôtel Edgar | Hôtel Edgar is a workshop-turned-hotel located smack in the center of Paris. The owners commissioned several artists to style the rooms, and the result is rooms like the kitschy “Cabin of Our Grandparents” with floating furniture and the blue-walled and quite elegant “My Night”. Double rooms start from €240.

Kube Hotel | Not far from the Montmarte district, the Kube Hotel is futuristic and exceptionally design-y. Even if the hanging chairs and plasma screens don’t impress you much, the Kube has its own ice bar carved out of 25 tons of ice that’s worth checking out. Double rooms start from €320.

Vice Versa Hotel | Each of the seven floors of Vice Versa are themed after one of the seven deadly sins. Don’t miss your chance to sleep in a cupcake by booking a room on the gluttony floor! Double rooms start from €180.

Want to stay strange without shelling out a ton? Check out these hostels in Paris where you can stay stylishly in a private room from €120. 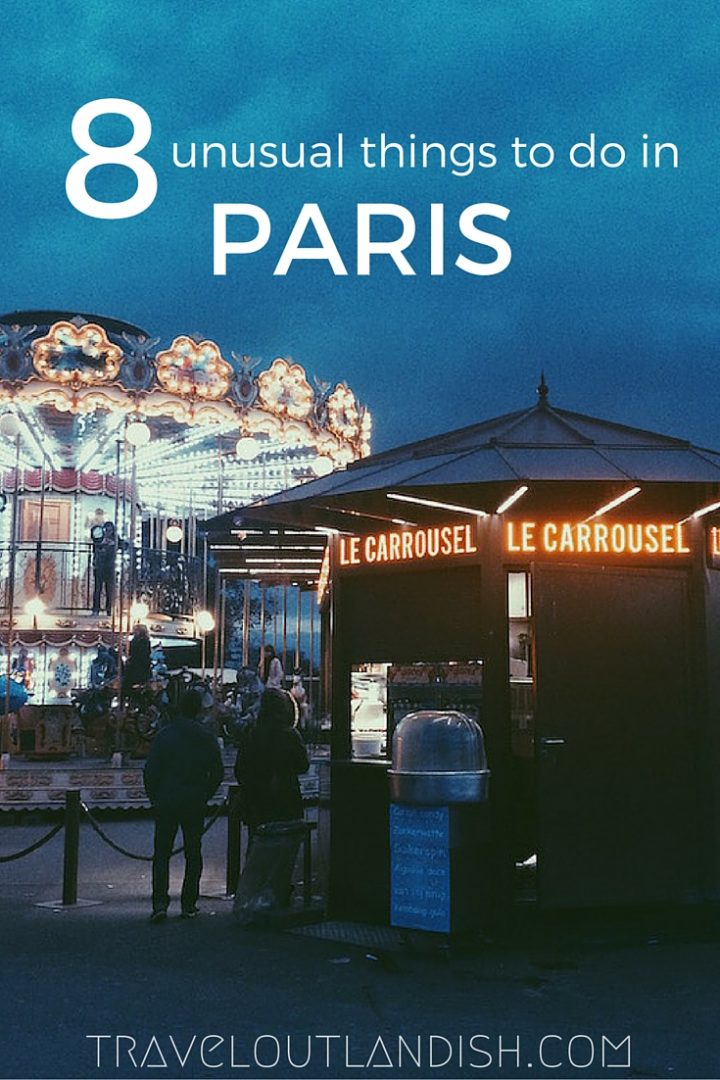 What were your favorite unusual things to do in Paris? And if you’re traveling in Europe…