The Other Ayutthaya: Sukhothai | Thailand 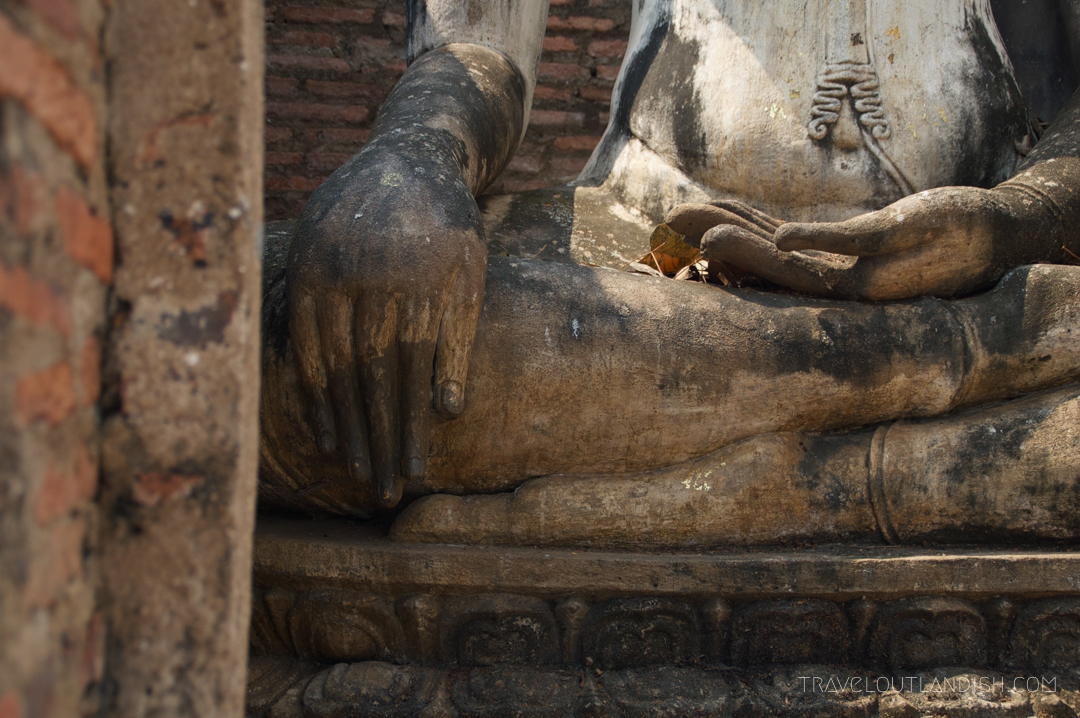 I remember Thailand most for its gold-plated stupas and orange-robed monks. With 300+ temples in Chiang Mai alone, pagodas and crumbling Buddha statues are about as common as 7/11 (and that’s really saying something). And sure, there may be an abundance of religious sites in Thailand, but some are way better than others. The ancient cities of Sukhothai and Ayutthaya, for example, far exceed their modern counterparts. Both are UNESCO World Heritage sites, rich with dynastic history and rife for exploring. But what if you only have the time or the interest in seeing one? After visiting both, the battle is officially on. Here’s our assessment of Sukhothai vs Ayutthaya.

Why Travel to Ayutthaya?

Transport back in time – 1350-1767 to be exact – where religion and royalty ruled. Back in the day, the Siamese kingdom of Ayutthaya grew into one of the wealthiest superpowers as a result of it’s an openness to international relations. But as it always does, wealth made Ayutthaya the envy of its neighbors; a Burmese invasion led to in the destruction, ransack, and ultimate downfall of the kingdom.

So what is Ayutthaya now? On an island formed between three rivers (the Pa Sak, the Chao Phraya, and the Lopburi), Ayutthaya as a heritage site is filled with beheaded Buddha statues, Khmer style prangs, and towering chedis amongst piles of burnt wreckage. Only some of the once 400 temples remain today, but the site is nothing short of spectacular. Charred remnants are a stunning reminder of a cultural legacy that has established Thailand as it is today. 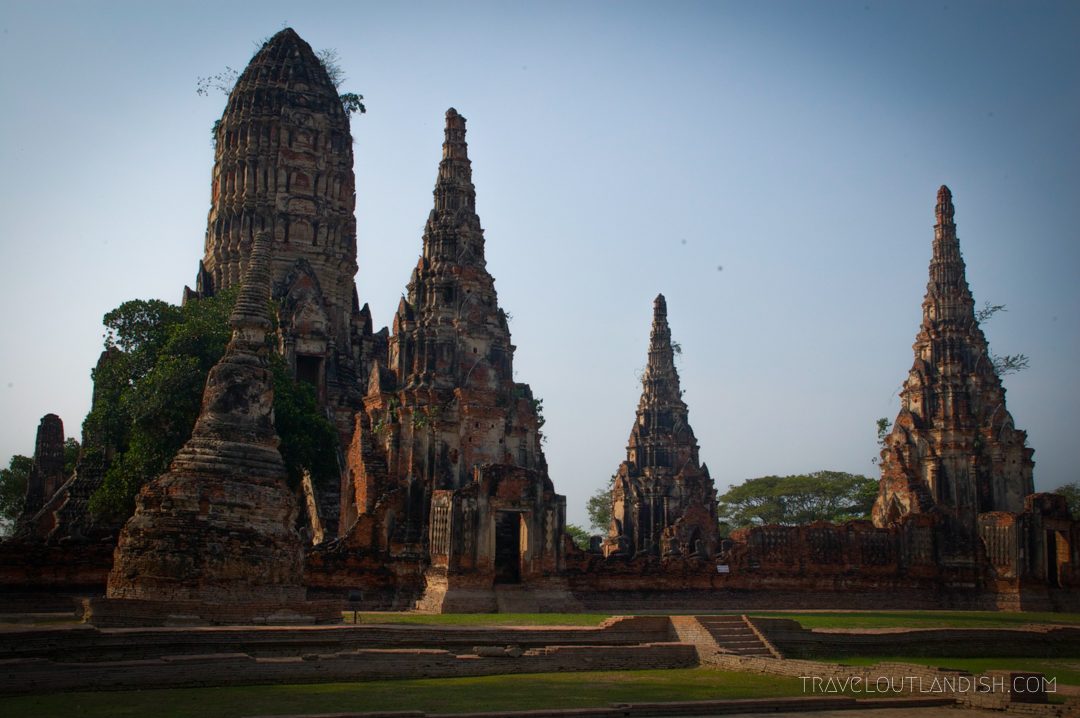 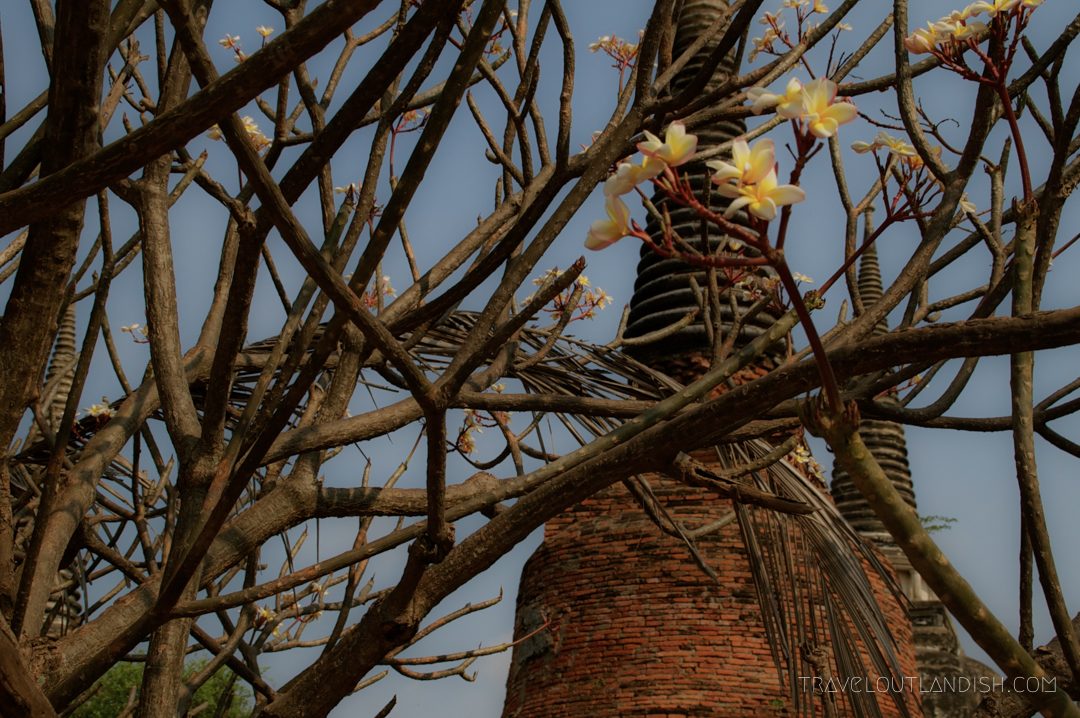 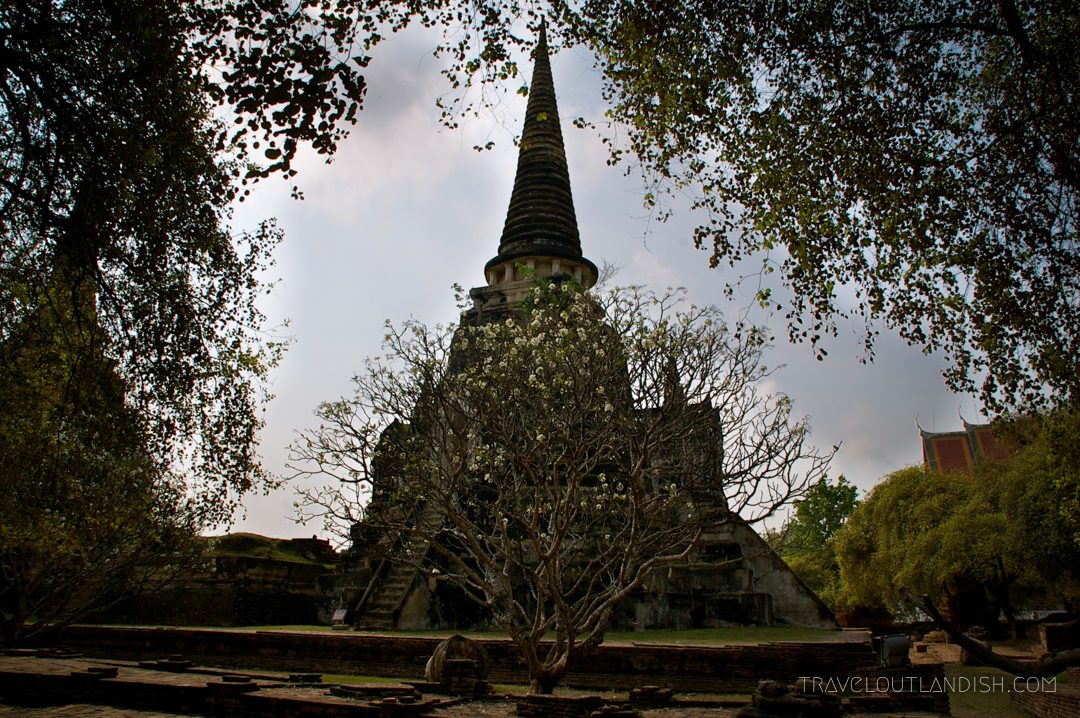 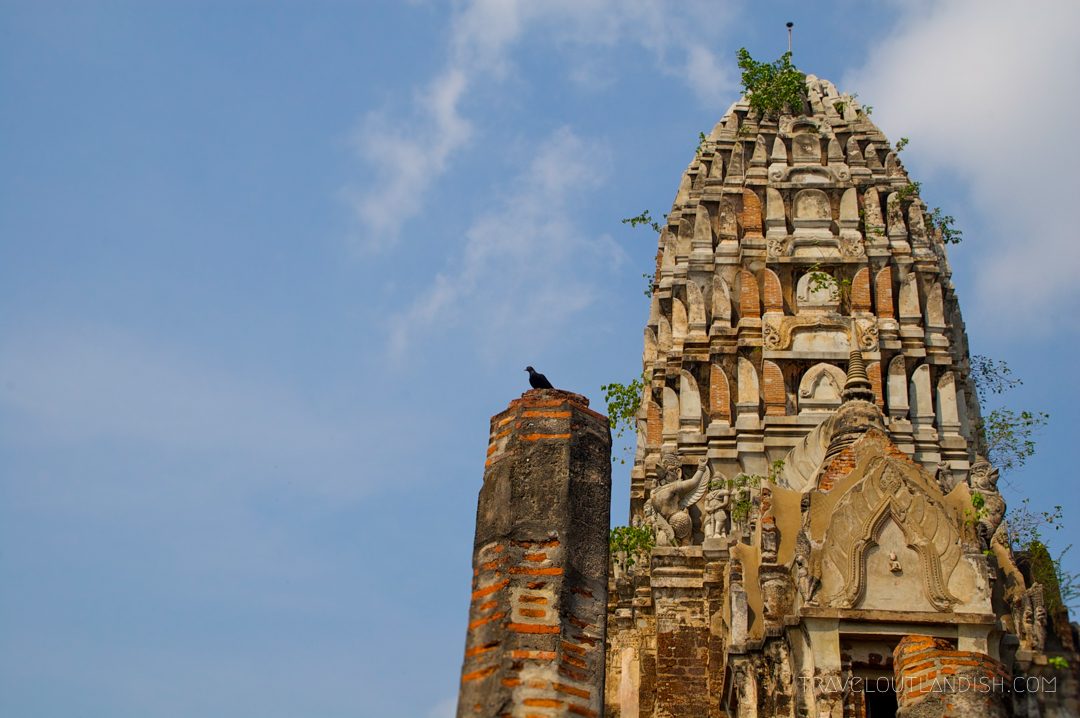 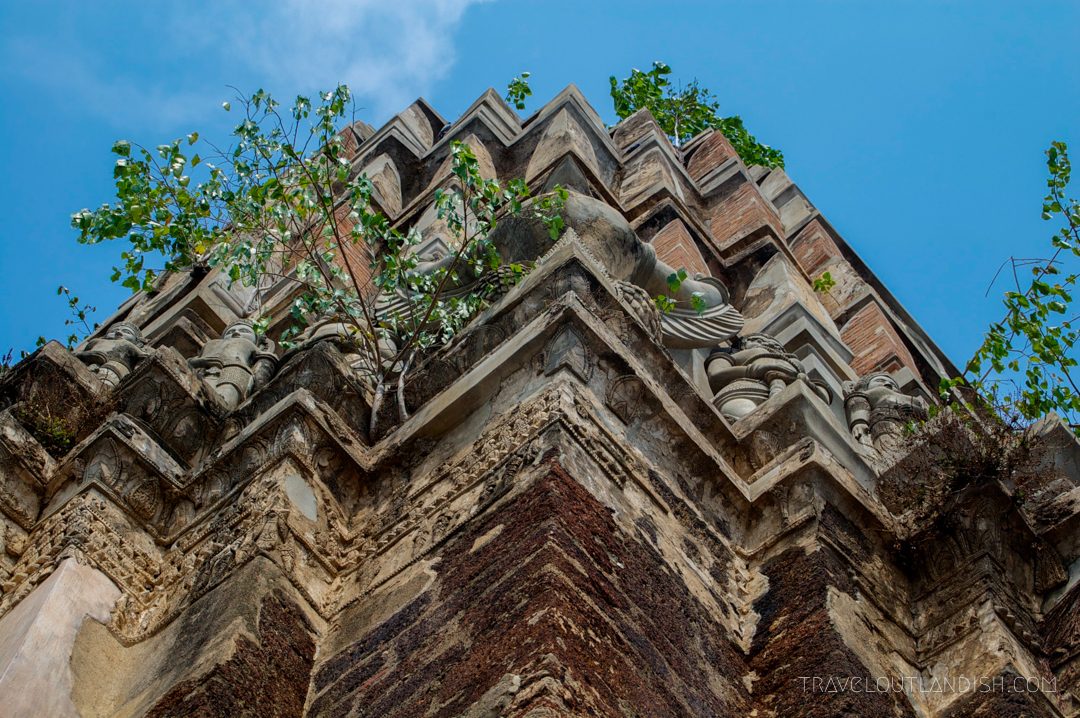 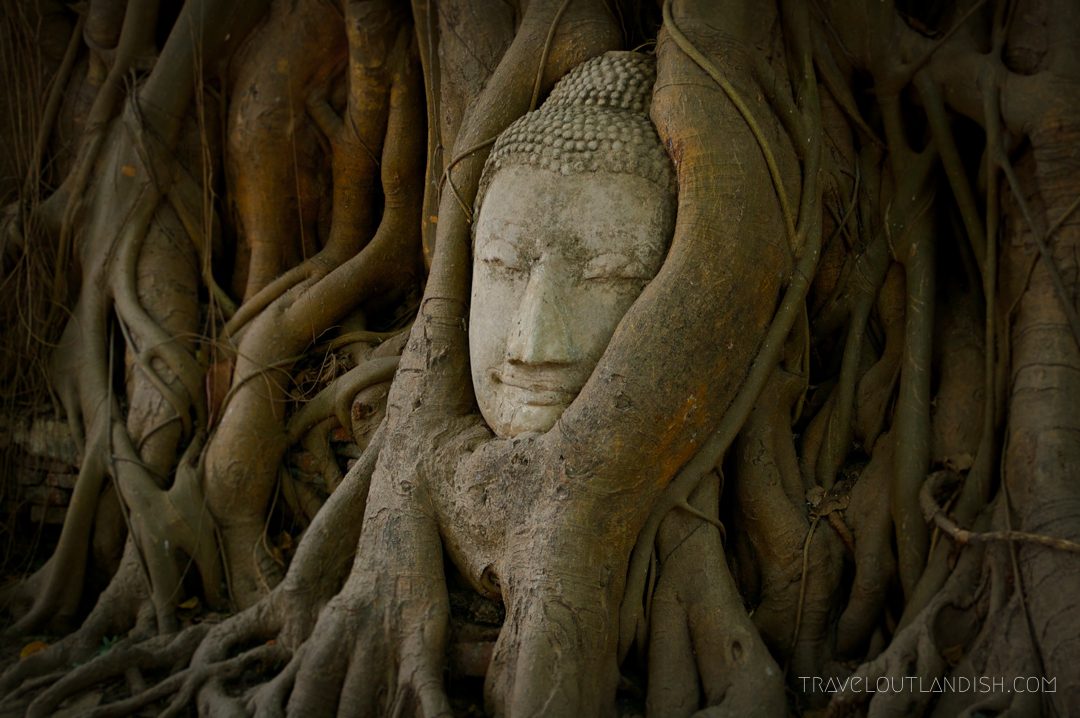 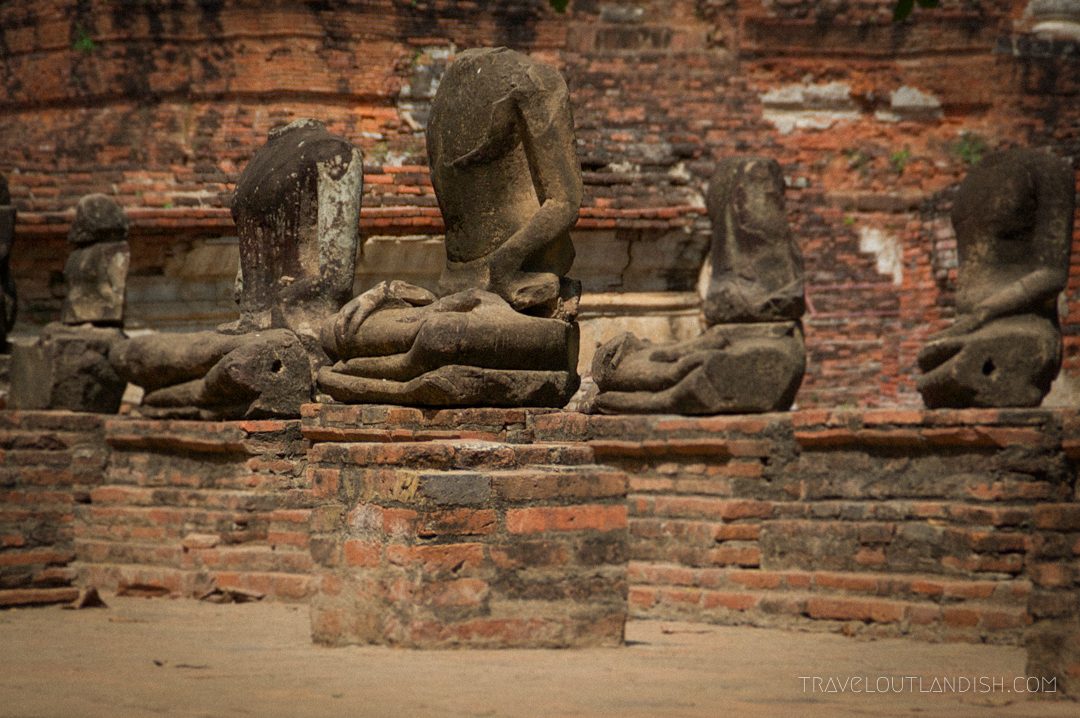 What to see in Ayutthaya:

How to get to Ayutthaya:

The bus from Bangkok to Ayutthaya is a speedy 1.5-hour bus ride (costing 100-200 baht). From Chiang Mai to Ayutthaya, your best option is an overnight bus to Bangkok (500-700 baht), that will get you to Ayutthaya just in time for the best morning lighting.

Once you’re there, rent a bicycle for 30-40 baht to explore the ruins or venture by songtaew for about 100 baht/hour.

Why travel to Sukhothai?

Welcome to a forest of colossal Buddha statues and lotus-bud chedis, tangled within eroding pillars and smoke-tarnished brick that outline aisles to nowhere. Sun-worn pots serve as a base for lightly puffing incense while mustard colored wax encases brass candlesticks placed carefully at the Buddha’s feet. And each Buddha, with their softly carved bellies, was created with carefully rolled clay, pressed to build the unmistakable hairline and peaceful gaze.

The classic era of architecture started in 1238 under Sukhothai dynasty — a dynasty that lasted for a quick 200 years until it’s fall under Ayutthaya. In modern times, there are 45 km and 21 historical sites to explore, and Sukhothai is one of the only UNESCO spots where you can wander unbothered in the beautifully preserved park. 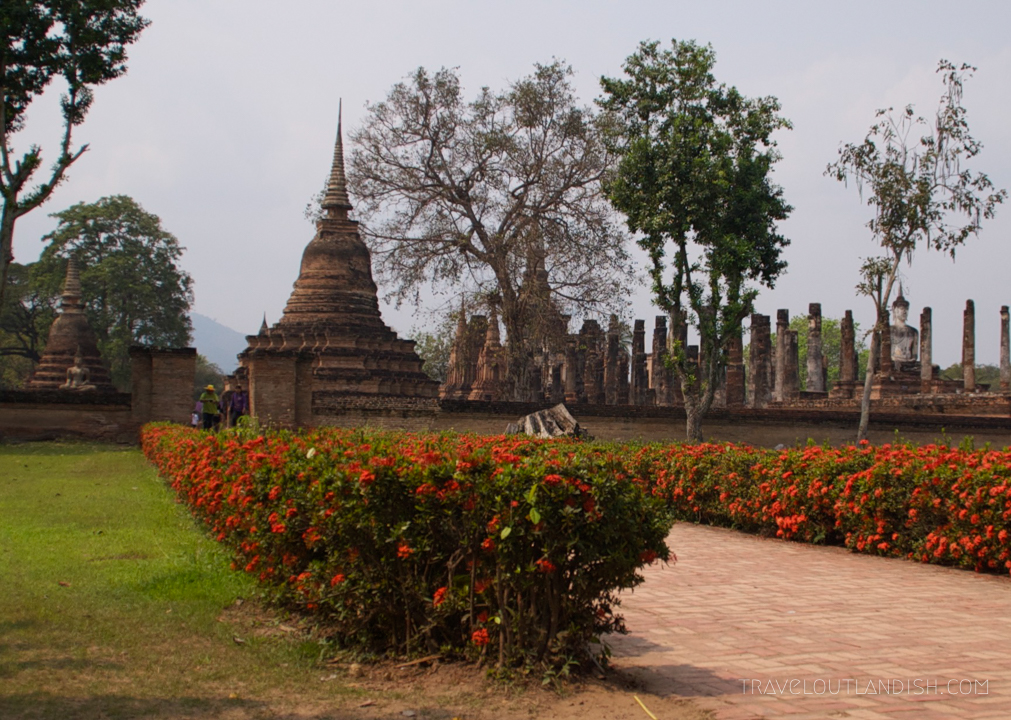 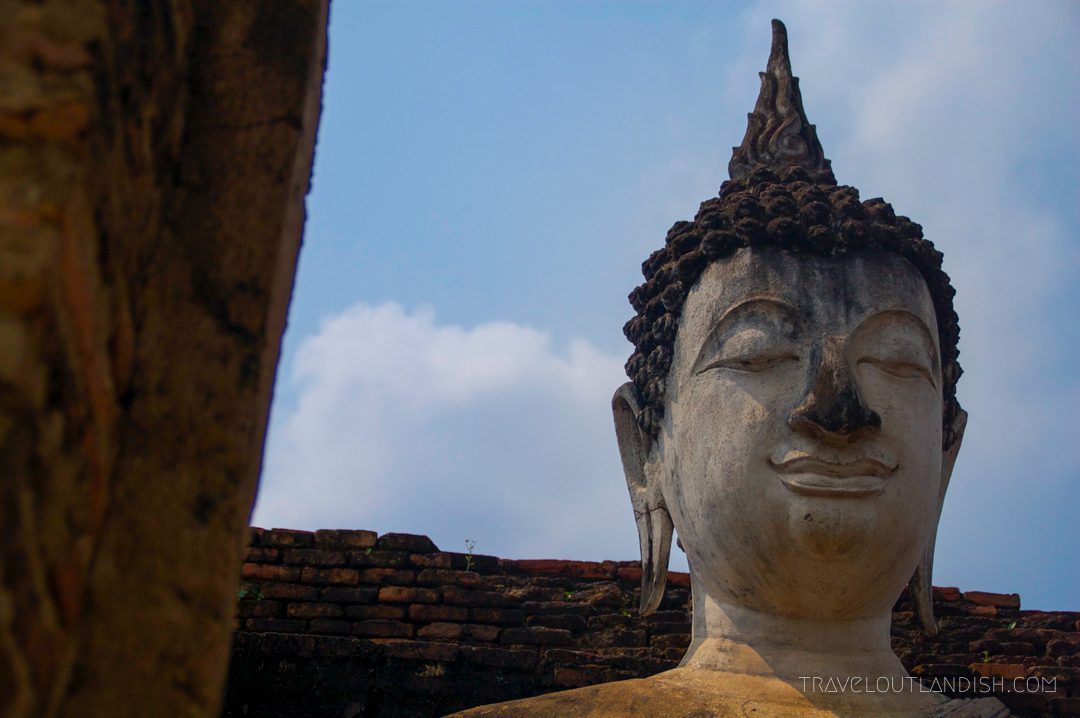 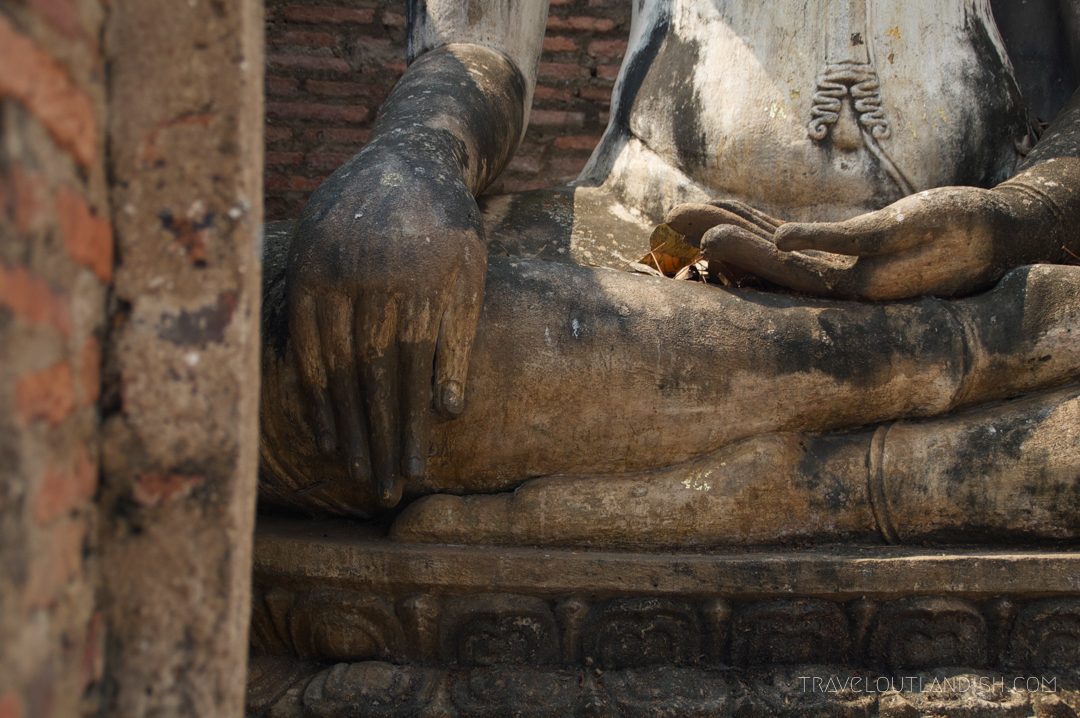 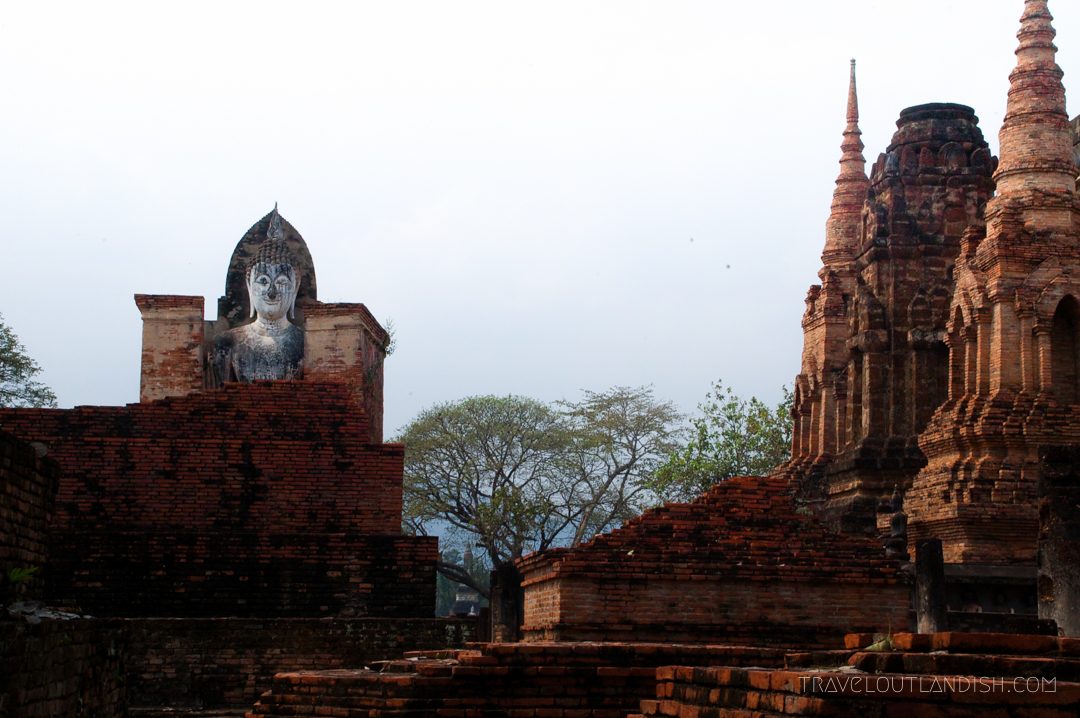 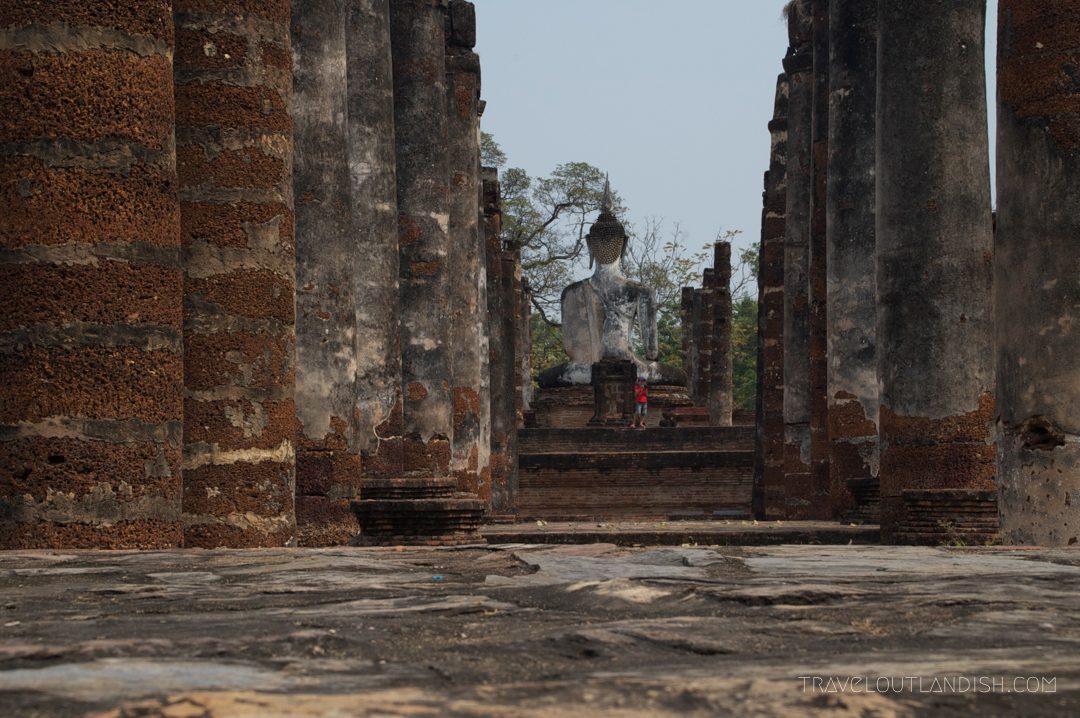 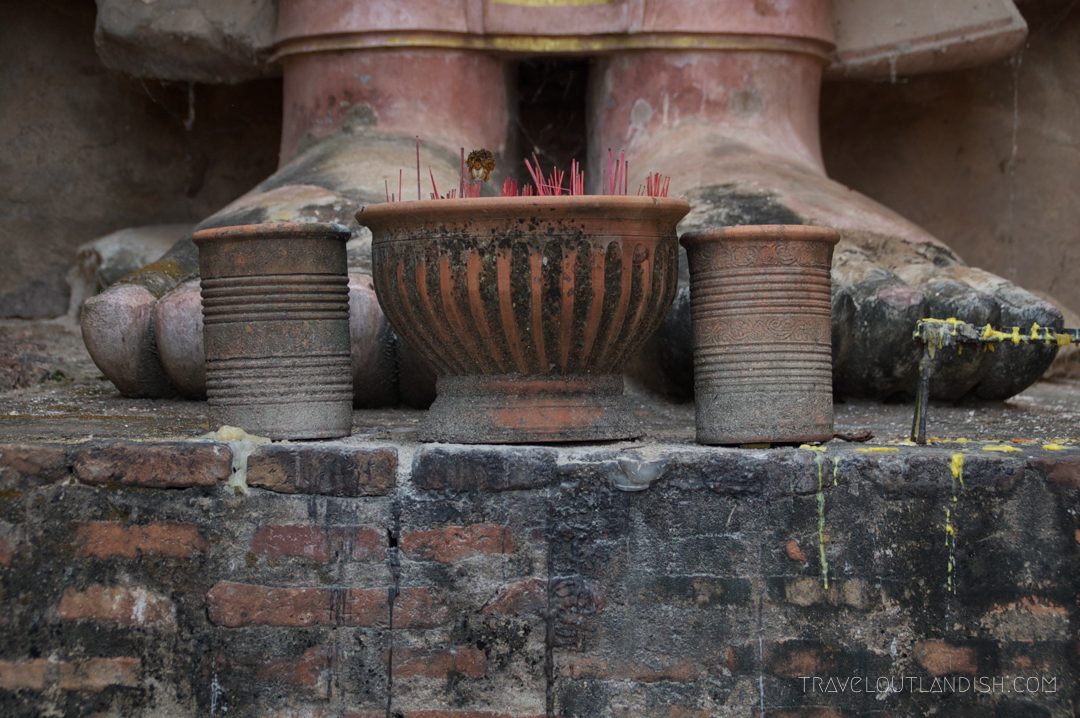 What to see in Sukhothai:

How to get to Sukhothai:

From Chiang Mai, the bus will cost around 300 baht and should take about 5 hours. Most Bangkok- bound buses will take a stop in Sukhothai, so you shouldn’t stress about finding transport — you’ll certainly be able to get here!

From the Sukhothai Bus Station to the Sukhothai Historical Park, you’ll pay 150-200 baht for a tuk tuk or songthaew. The park is best explored by motorbike, but renting a bicycle is also a good option if you can take the heat (bicycle rental appx. 30 baht + 10 baht entrance fee).

So, Ayutthaya or Sukhothai?

If you only have the chance to see one in the Ayutthaya vs Sukhothai battle, our vote is on Sukhothai.

Why Sukhothai? There are a few reasons. Sukhothai is a bit harder to get to and the important sights are spread out. You could say this is a bad thing, but we found the park to be less crowded, quieter, and more fun to wander. Sukhothai was also easy to explore independently by bicycle, and we liked setting our own pace.

Ayutthaya made an easy day trip from Bangkok, so we ended up sharing the popular sights (hey, Buddha head in the tree roots!) with lots of people. The park is usually explored by tuk-tuk, and we felt a bit rushed between sights. It also gets hot as hell, which never helps. 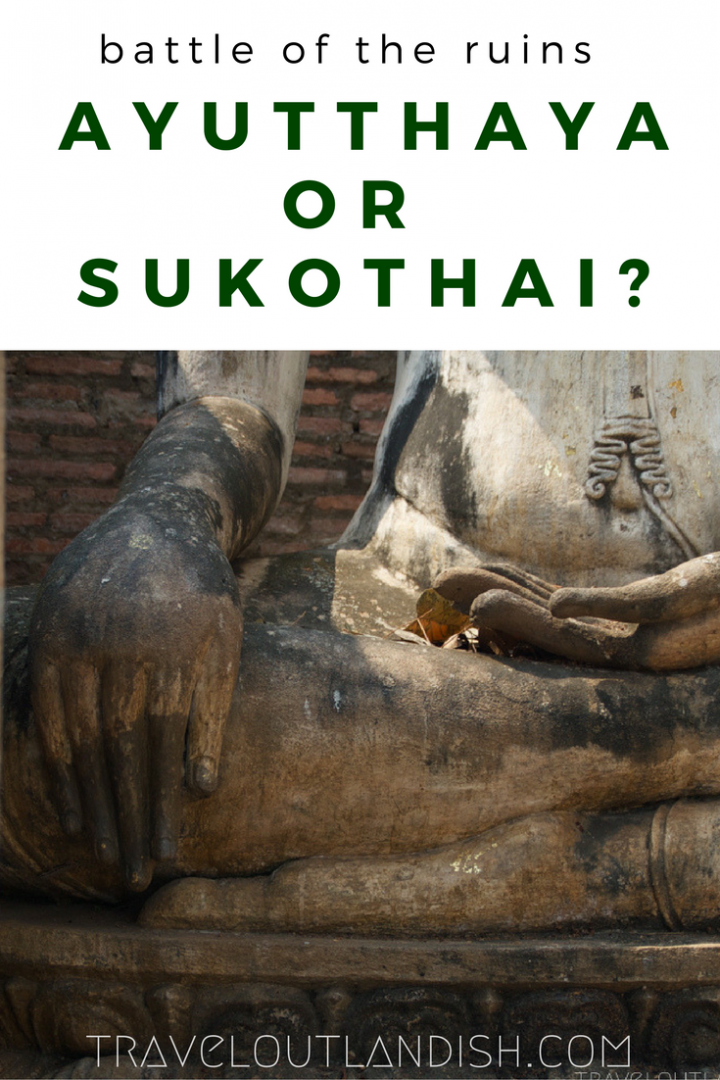