How to See Orangutans (or Not) at Semenggoh Wildlife Centre | Malaysia 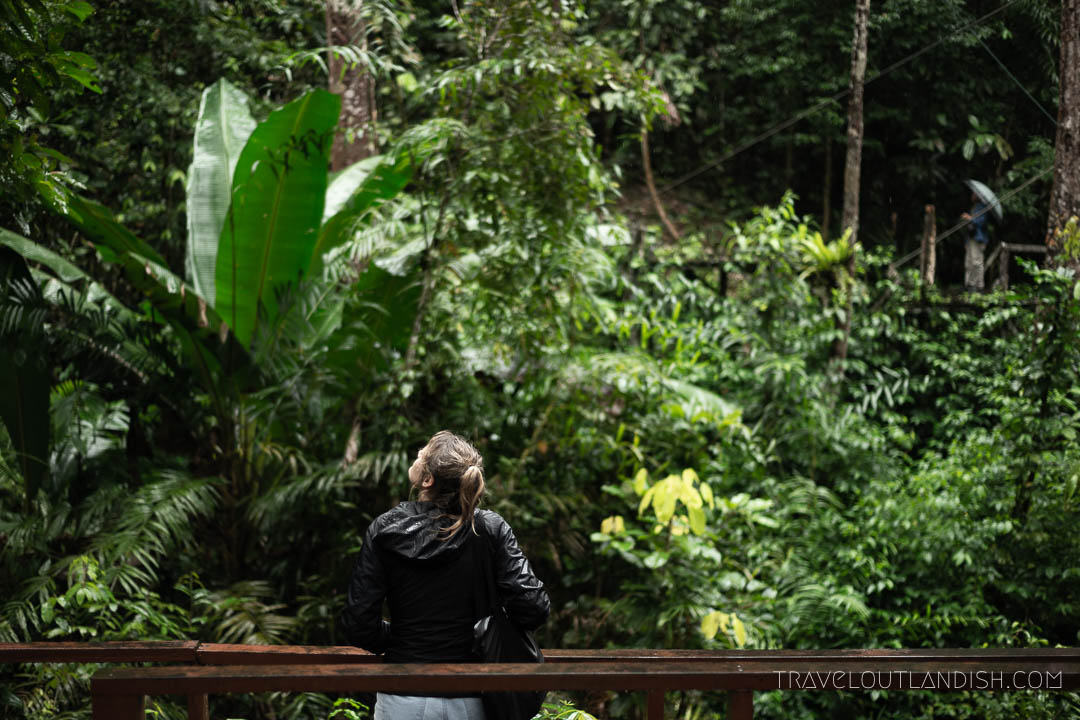 Person of the forest. The red ape. Our shaggy-haired, long-armed, solitary cousin that we wouldn’t likely invite to family holidays. Orangutans were the whole reason I planned a trip to Borneo if I’m being honest. Like… I’m not huge on the whole spirit animal thing, but if I were? Mine would DEFINITELY be an orangutan. And just 35 minutes away from Kuching, you can see semi-wild orangutans at the Semenggoh Wildlife Centre – so long as you go outside of fruiting season.

Semenggoh Wildlife Centre is a rehabilitation center that reintegrates injured or orphaned orangutans into forest life, but more than that, it’s a fascinating encounter with one of nature’s rarest, endemic, and fleeting of species. We got unlucky and visited Sarawak during the fruiting season (see: there is not a single photo of an orangutan in this post about orangutans) but, I swear: the information is still good! You’ll find below a complete guide to Semenggoh Wildlife Centre including details on what to expect, when to go, how to get there and more.

The Semenggoh Wildlife Centre was established in 1972 in the Semenggoh National Reserve and is currently home to 31 wild and semi-wild orangutans. While orangutans aren’t native to the forest in Semenggoh, it’s no zoo either. The animals are completely free to roam throughout the 1,613 acres forest and forage their own food. But as the area isn’t large enough to naturally provide enough food for all the animals (and the animals are only somewhat adept at foraging in the first place) the center offers supplementary feedings twice a day so visitors can come to observe the great apes devouring a feast of bananas, papaya, jackfruit, sweet potatoes, coconuts, pineapples, oranges, and hard-boiled eggs. This means that for most of the year, this is one of the best places in Borneo to see orangutans. 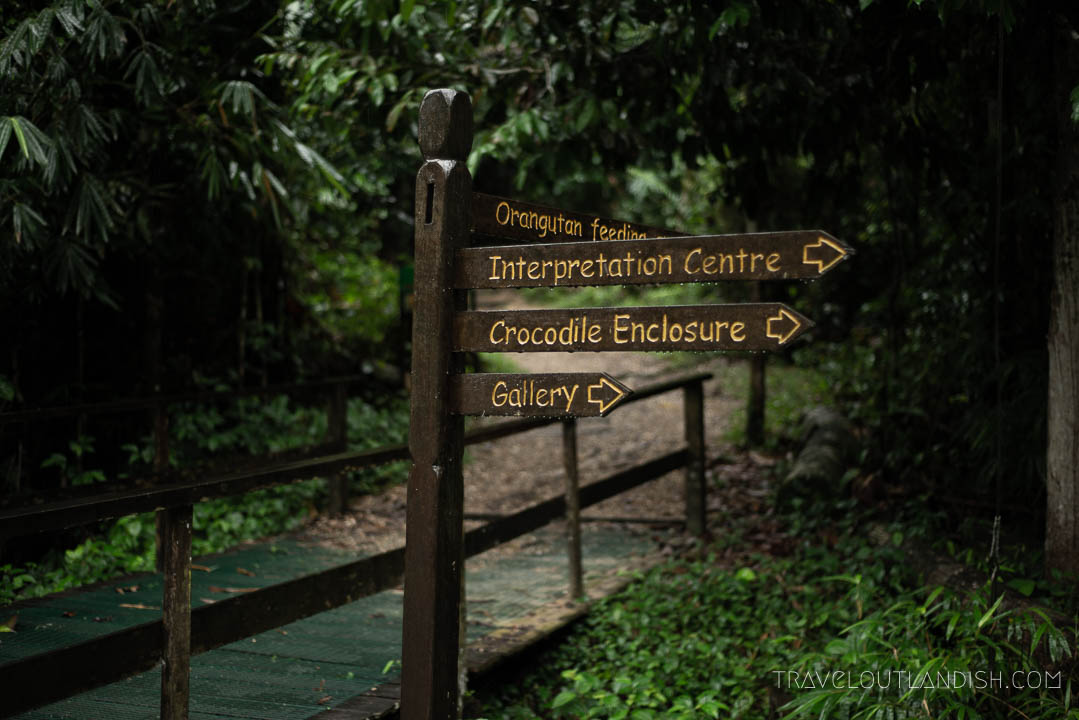 Semenggoh Wildlife Centre is open almost every day of the year, rain or shine. There are twice daily feedings at 9 am (open 8am-10am) and 3 pm (open 1pm-4pm). You’ll want to time your visit around the feedings as the park is closed mid-day. You have to leave the park outside these hours. The Semenggoh entrance fee is RM10 and is purchasable at a kiosk at the entrance. From there, it’s a 20-minute walk or 5-minute drive to the parking lot and visitor area. You won’t need a lot of extra time; you only walk to the feeding platform after a briefing. Besides the info center, there’s not a ton else to do inside the park.

There is no limit to how many tourists can enter on a given day, but our guide told us that 50-75 people come per session during high season. On our rainy, early morning visit, the group was only 12. When we came back a few days later to a sunny, afternoon feeding, there were 50+.

The ranger gives a briefing that skews towards safety during the regular season and expectation setting during the off-season. Ours was somewhere along the lines of “there is a very low or zero percent chance you will see them today, but this is good because it means that there is fruit in the forest and our rehabilitation is working.” I guess it was hard to be upset when they put it that way. It’s just a 3-5 minute walk from the briefing point to the viewing platform which gives you a view of the feeding platform about 10m away. It’s a jungle setting, and besides the wooden structures, it just looks like a really beautiful swatch of forest. 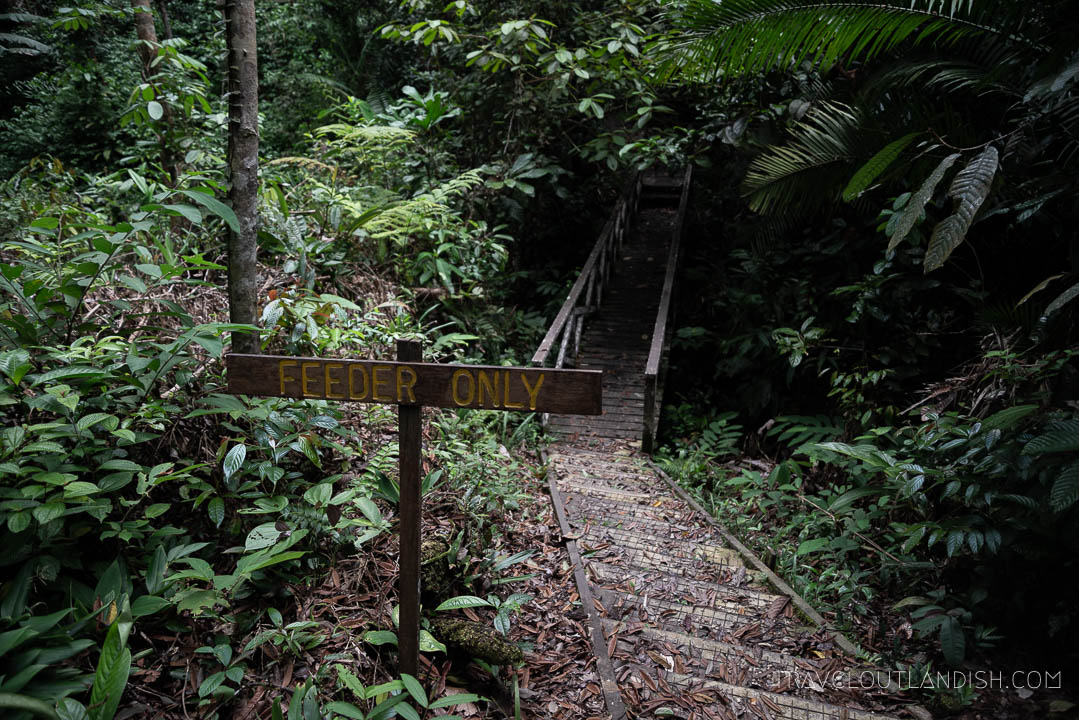 Call of the Orangutans

The feeder will enter along a separate path. To attract the orangutans, they’ll move from one platform to another, setting out food and doing the Tarzan call to get their attention. In high season, rangers report that the orangutans will be sitting around waiting for the food rather than being summoned by the call. At an average feeding, anywhere from 0 to all 31 apes could show up.

The park produces monthly stats of which of their animals show up and at what frequency. Some show up 40+ times during the busiest months, while others won’t show up for years at a time. If you get lucky enough to show up on a day when the orangutans are out, you can expect babies playing and moms teaching their young. Some might swing through the trees or interact with the feeder. Some of the naughtier ones have even peed on unsuspecting visitors or stolen expensive looking cameras.

It crosses somewhere between a wildlife and zoo experience in a way that not many places have done ethically or well. Even without seeing the orangutans, it was clear that the rangers care a lot about the work they’re doing. They act in the interest of the orangutans with the limited viewings and do their best to create space for the animals rather than letting people wander freely in the park or caging the animals. Which leads me to my next point…

I’m always pretty skeptical of animal tourism, especially projects that allow such close interaction with the animals or orchestrate feedings. Tourist interest often wins out over the animal’s wellbeing; some places sedate tigers or abuse elephants to achieve the desired results. Obviously, I don’t have a full peek behind the curtain at Semenggoh, but from what I can tell, the center looks after the animals very well. The orangutans at the center are injured or orphaned, and therefore aren’t fit for living in the wild. The Semenggoh Wildlife Centre attempts to split the difference. Their reasons for feeding the orangutans make sense. You aren’t encouraged to approach the orangutans (although they may approach you!). And of course, tourism helps bring much-needed funding to continue conservation efforts and protect the forest. 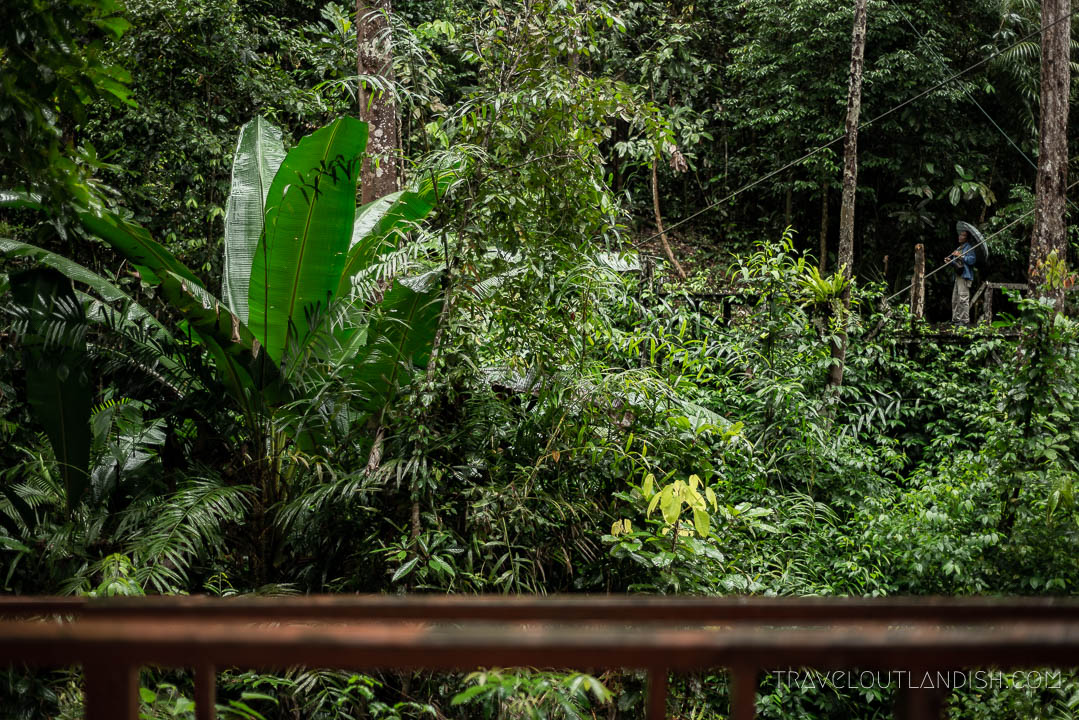 Where else can you see orangutans?

Around Sarawak: Similarly well intended, the nearby Matang Wildlife Centre gets more questionable feedback. Animals who aren’t successfully integrated at Semenggoh after a quarantine and training period are sent to Matang for rehabilitation. There are more than 20 apes living there now, but as Lonely Planet described, “the center looks like a low-budget zoo plopped down in the jungle”. The orangutan enclosures at Matang are small and closed, unlike the forest Semenggoh. From what I’ve read, the park staff does their best, but the center is working with limited resources, and the outcome is pretty grim. And while you can’t see orangutans, Bako National Park is just 40 km away. It’s home to some of Borneo’s other endemic wildlife like the proboscis monkey, bearded pigs, and flying lemurs.

How to Get to Semenggoh from Kuching

The K6 bus departs twice daily from Jalan Masjid in Kuching. The first one leaves at 7:20 and the second at 1:00 pm, so you’ll arrive in time for the feedings at 9:00 am and 3:00 pm. The ride takes about 40 minutes, dropping you off at the entrance. From there, it’s a 20-30 minute walk to the feeding platform. The bus also departs Sememggoh twice a day, at 11:00 am and 4:00 pm. If using the Grab app, the default location, “Semenggok Forest Reserve” or “Orang Utan Feeding Platform” is different than where you want to go. Instead, search for “Semenggoh Wildlife Centre” and be sure you’re entering the park from the east side on the map. Bus fare in 2019 was RM 4.30 and Grab cost RM 26. 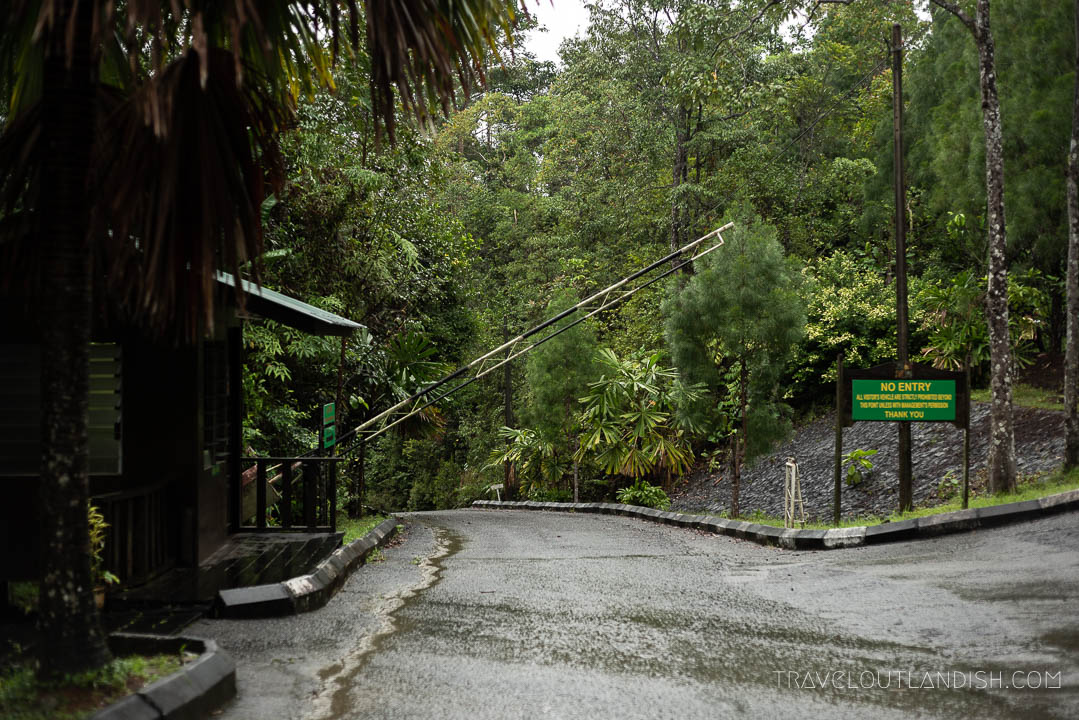 When to Visit Semenggoh 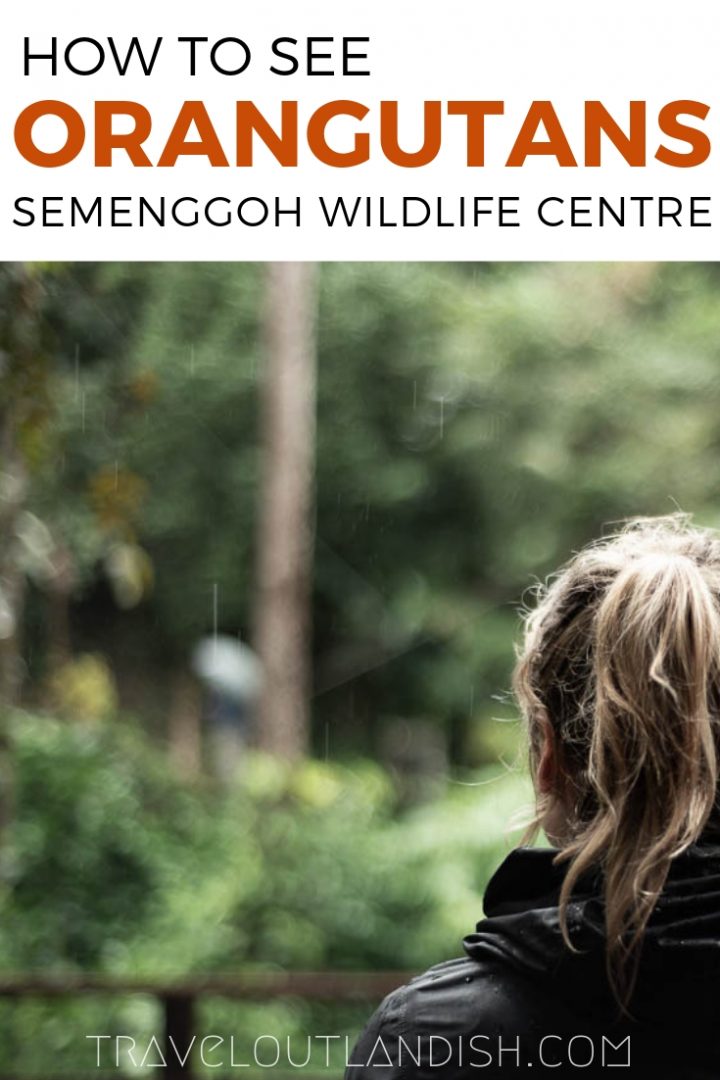 You’re almost guaranteed to see orangutans most months of the year, but it’s very unlikely to see one during the fruiting season. I went twice in early February and didn’t get to see an orangutan either time, but if you go between April to November, you’ll likely see a dozen apes. They’ll be swinging through the trees, devouring fruits, and even lounging by the visitor center. To maximize your chances of seeing an orangutan, plan your visit outside of fruiting season. You’ll also want to go for the morning viewing and stay for the afternoon session, and avoid going when it’s raining. Orangutans, like most of us, are happier in beautiful weather.

Have you ever been to Sarawak or visited the Semenggoh Wildlife Centre? Share your experience! Let travelers know that there ARE orangutans in Semenggoh and this is a stellar place to see them.