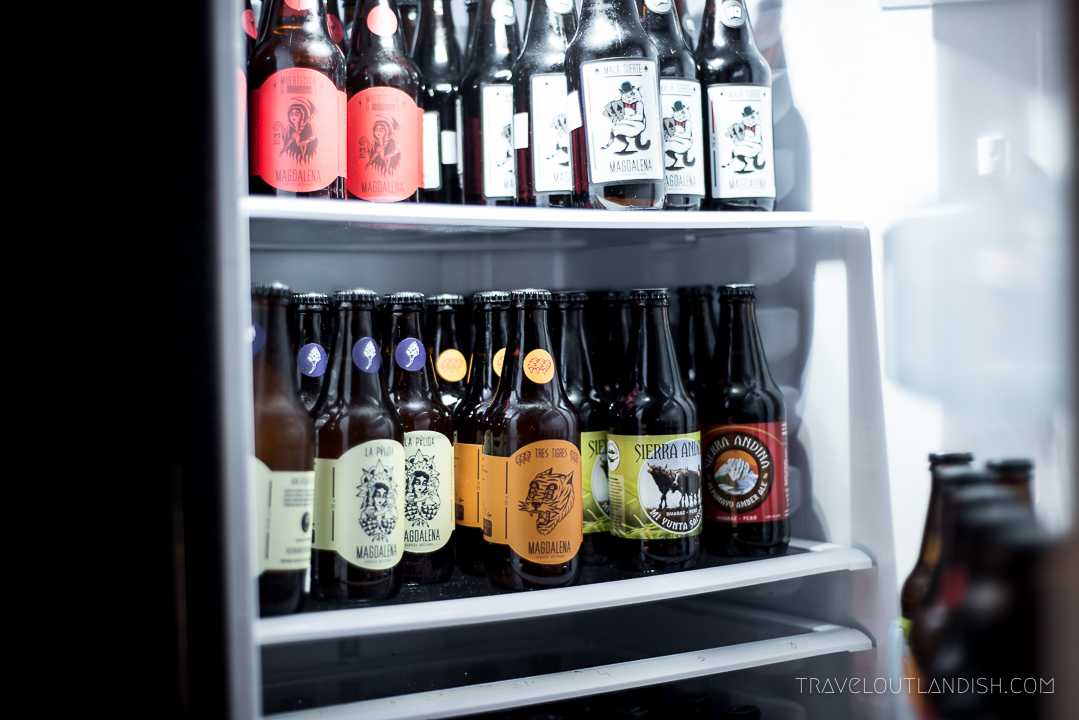 *Update April 2018: We’ve just learned that Faces of Cusco has closed since the time of publishing. For more info on where to drink, we’ve added more places to our list of “Where to Buy the Best Peruvian Beers”

If you’ve traveled in South America, you know that finding good craft beer is almost a futile quest. Over 7 months in South America, we had to deal with a plethora of lukewarm lagers and months of dull pilsners. That is, at least, until we got to Cusco.

We went to check out Sunday Football at Faces of Cusco*, and opening the fridge was like crossing through the gates of beer heaven. It was brimming with ice-cold, 12-ounce glass bottles of delicious Peruvian beer. Craft beer! It was the first time in all of South America that I was actually overwhelmed by a beer selection.

So, as an act of duty towards my fellow beer drinkers, we tried them all. Here is a quick rundown on the best of Peruvian beer. 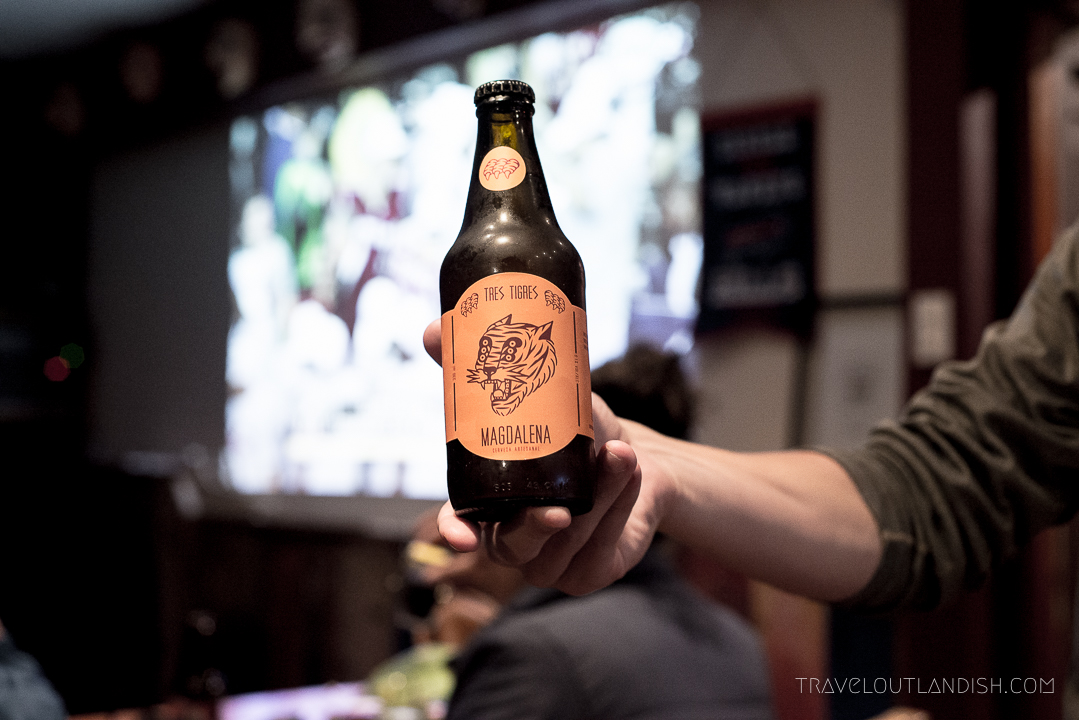 Review: Normally, I tend to avoid wheat beer, but I tried it for the sake of research. While I usually find wheat beers to have a weird sweetness to them, this one was slightly on the bitter side with a nice finish. 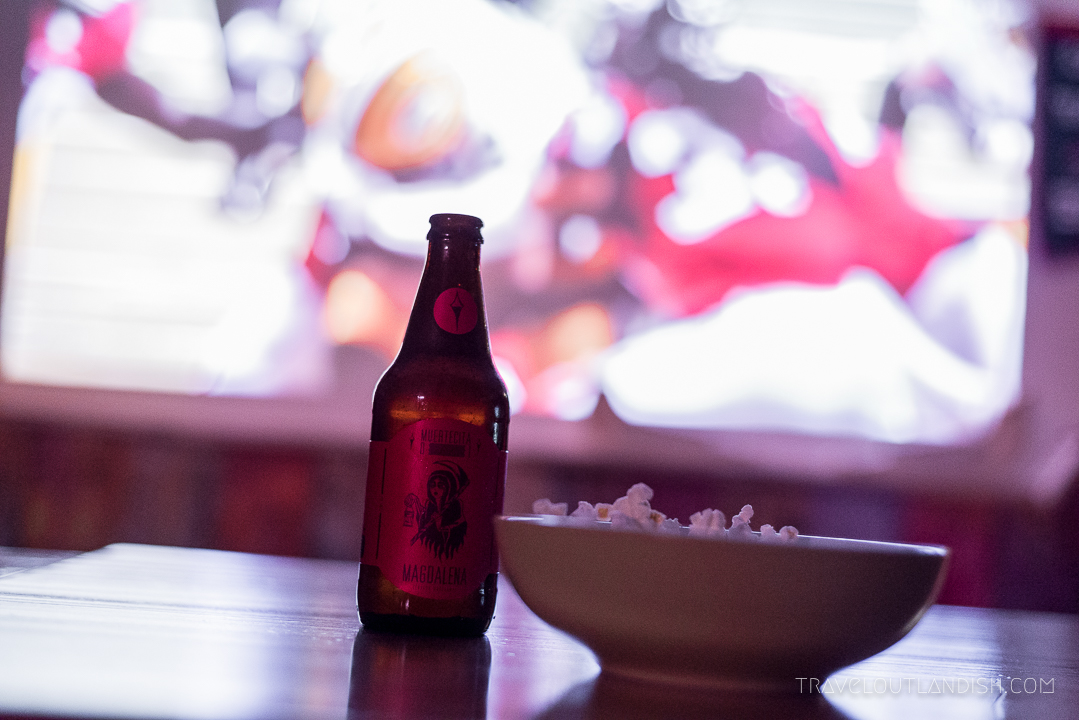 Review: Boy, do we miss IPA’s. When I think of beer, a delicious, hoppy IPA comes to mind. Unsurprisingly, most of my South American beer cravings have gone unsatiated. But Muertecita? It hit the mark and passed with flying colors. Although it’s called a Double IPA, any IPA enthusiast will find it to be pleasant, hoppy, and delicious. 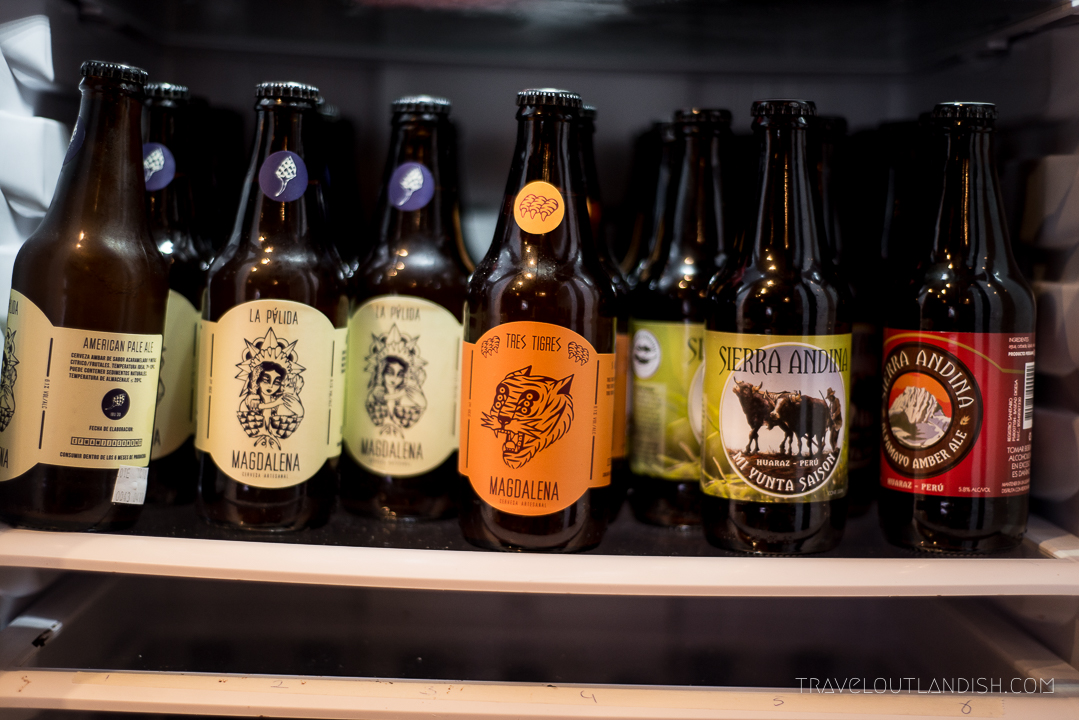 Review: I was handed this beer with the promise that it was very drinkable. In reality, I anticipated something close to the aforementioned South American lagers.La Pálida, however, was dangerously similar to my favorite pale, Mirror Pond. Call me surprised! It was exactly as described – highly drinkable – and was the kind of beer you could imagine drinking all afternoon.

Review: It’s a Blonde Ale that is fairly wheaty. It was delicious and not overly fruity. I am continuously confused as to why a Blonde Ale is called Blonde because the color is normally like a lager. This one, however, made me realize the true meaning of blonde. Very Goldilocks-esque. 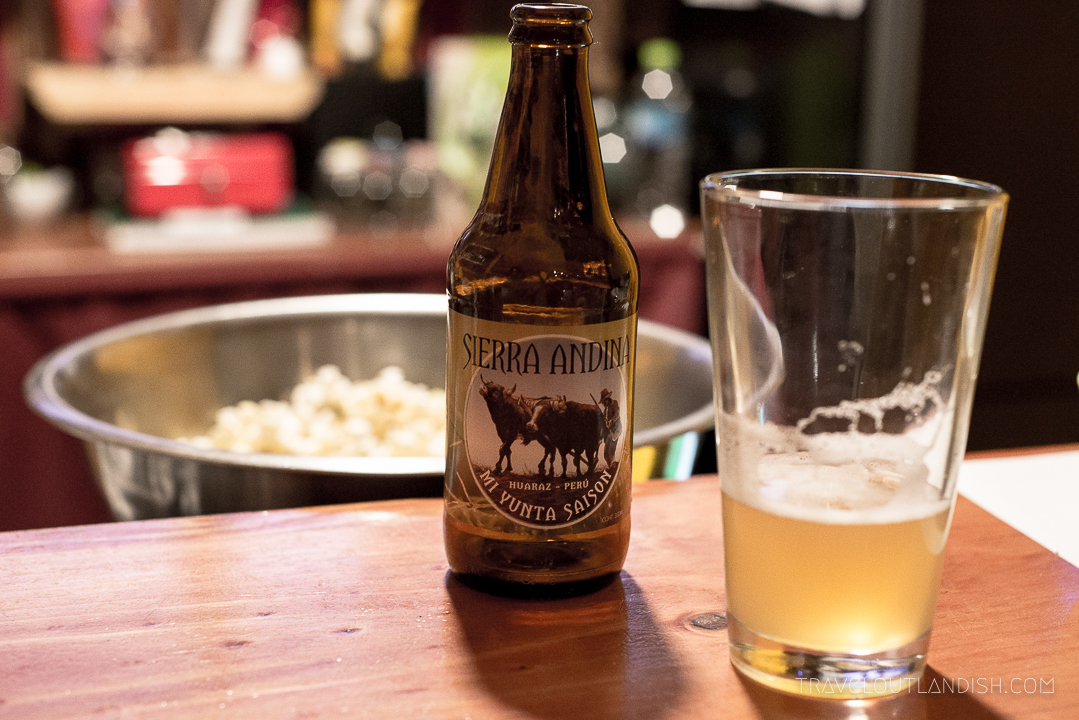 Review: This was quite a refreshing Saison. Normally I find saisons to be just an over flavorful Pale Ale or an under flavorful IPA. This one, however, found a way to pack a punch and be delicious and crisp. As seen in the picture I could keep drinking them while putting back popcorn. Just great to have a snack and a beer combo.

Review: To put it gently, this beer is strong. Strong and delicious, which makes it especially dangerous. Have one, and it is easily one of the best Peruvian beers. Have two or more, and you can say goodbye to your afternoon, evening, and probably the following morning as well. All this being said, try Pachacutec. It is pretty great, and everything you could want from a full-bodied ale. 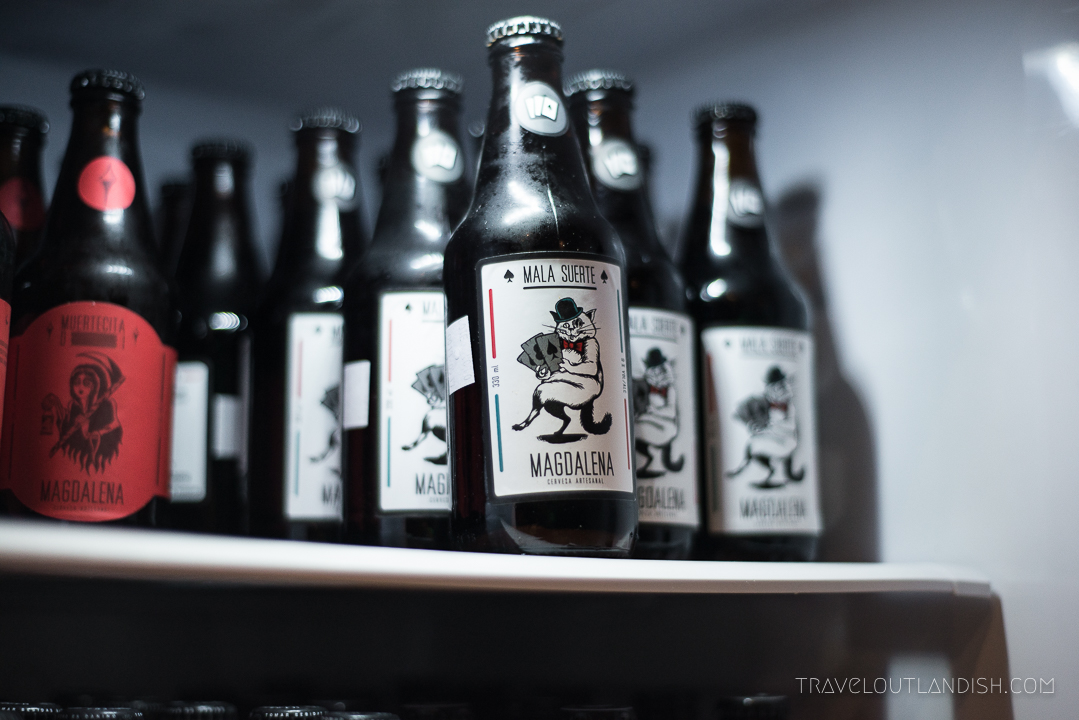 Review: Black IPAs are a beer type that I usually really dislike. For the first two sips of this one, it was true. But as my palate adjusted, I found myself really liking this beer. I would definitely drink this Black IPA again, and that’s something you won’t hear me say that often.

Review: Alpamayo is quite the amber ale. I have always had an affinity for ambers, but the South American ambers have been just too damn bitter. This one is quite refreshing, very well balanced, and has just enough hops to give it a really good kick.

And finally, a few non-craft beers that we’re reviewing anyway!

Cusqueña | Dorada | “The Best of the Cheap Beers”

Review: Every South American country has a light lager – Pilsen, Brahma, and Aguila to name a few. Of all the Peruvian beers we have tried, Cusqueña is by far is the closest to a traditional lager. It is light and refreshing with good flavor, and when you can find an extra cold one, it is just about the best way to kick back and people watch in Cusco.

Review: While Cusqueña is the clear local favorite, we would Cristal is actually our favorite of all the lagers. You can think if it like Peruvian Corona. The only stipulation? Find it an ice-cold can. 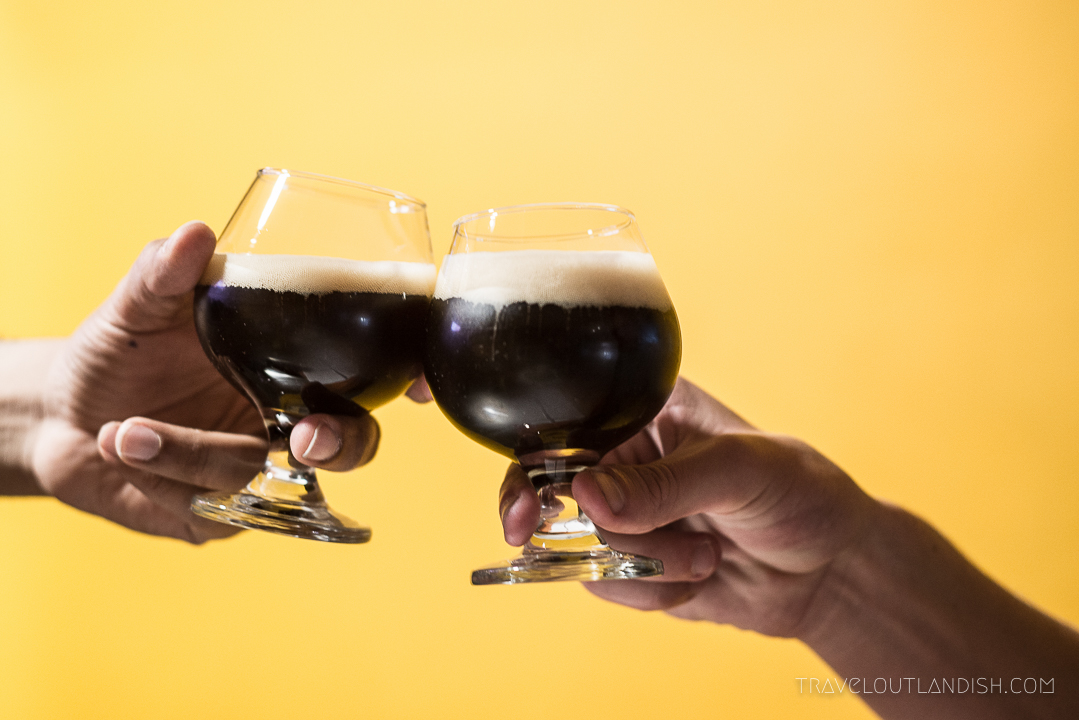 Where to Buy the Best Peruvian Beers

In Peru, you won’t find the best beers at the supermarket. Most of your drinking should be left to specialty bars. Here are a few spots where you can get your Peruvian beer fix: 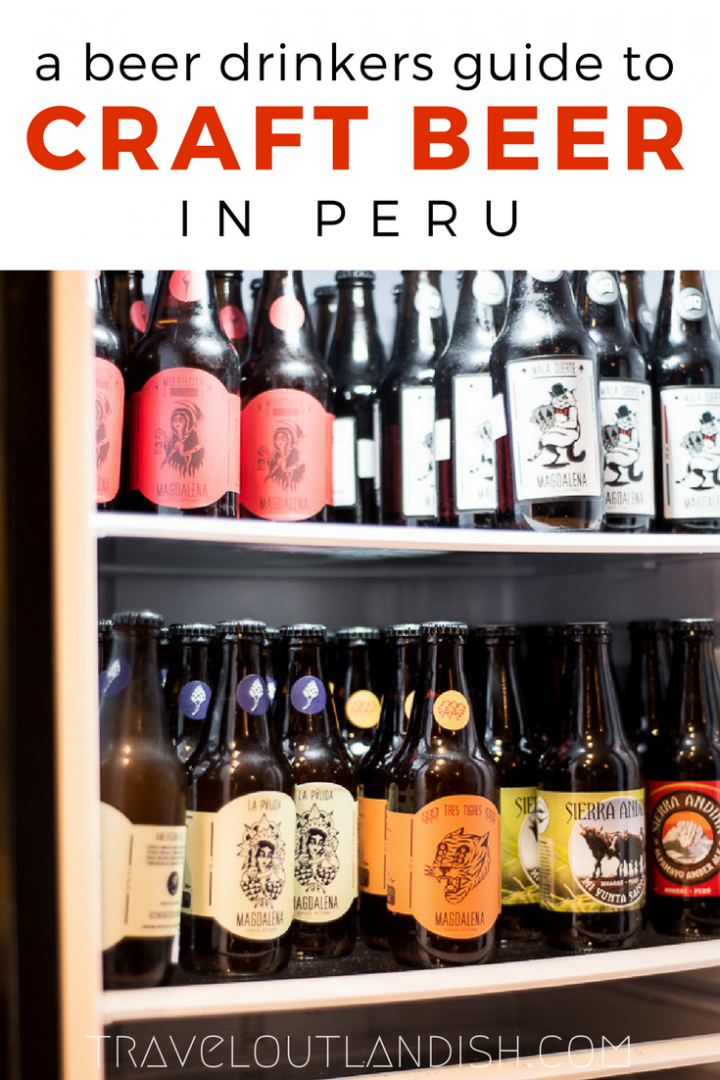