A Get Outside Guide: Hiking Laguna de Cuicocha | Ecuador 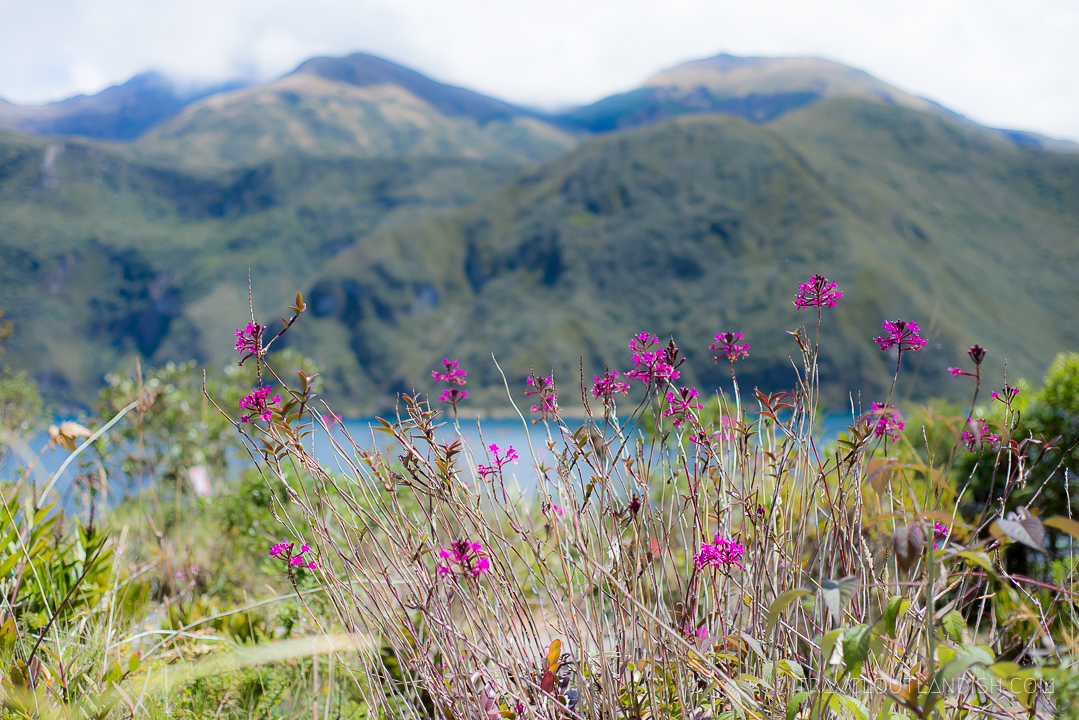 Imagine still blue waters and vivid flora. Native plants climbing down steep ridges to the basin of a caldera. A highly alkaline lake with two uninhabited islands breaking the surface. Indigenous people say the larger of the two islands looks like a guinea pig. I’m not so sure about that, but the whole scene is pretty damn impressive anyway. Laguna de Cuicocha really could be on the cover of an Ecuador guidebook, but I’m pretty glad it’s not.

Laguna de Cuicocha is like a lesser-known version Laguna Quilotoa. The crater lake sits just outside of Otavalo. Otavalo is primarily known for the Otavalo Market, meaning that hardly anyone makes it outside of the town. But those who aren’t much for hat shopping are in for something pretty damn impressive at Laguna de Cuicocha. The crater lake has a jagged ridge and you can hike around the whole thing without ever running into another person.

Are you looking for one of the best under-the-radar experiences in Ecuador? Laguna de Cuicocha may not be huge, but it’s definitely worth the detour. Here’s everything you need to know about hiking Laguna de Cuicocha including suggested hiking routes, how to get there, and where to stay in Otavalo.

Entrance to the park is free but you have to sign in at the park gate. 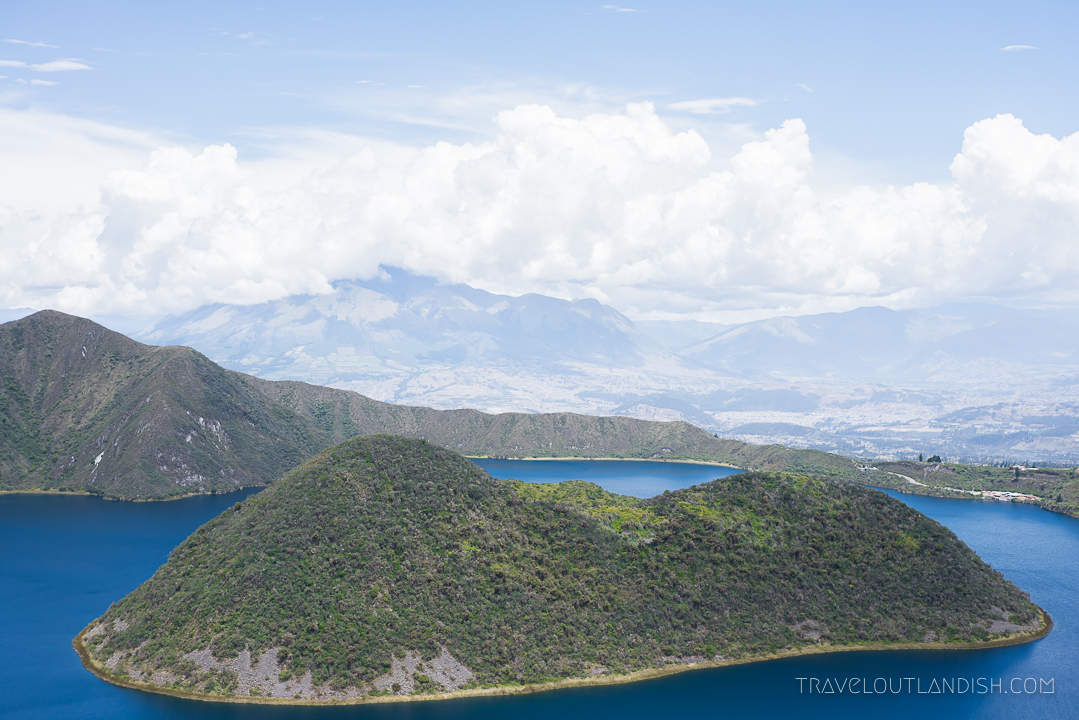 The Laguna de Cuicocha circuit is 14km and takes 4-5 hours to complete with photo stops. The trail follows the rim of the lake so the only real ways to hike it are clockwise or counterclockwise. Both ways are well marked and the trails easy to follow.

Clockwise (Recommended): For this option, you’ll get dropped off at the trailhead up the road from the Visitor’s Center (~2km). The first few miles will be steep hiking through grassy meadows, but you’ll eventually reach the rim of the lake. From there, it’s nothing but views and an easy incline as you circle the rim of the lake. You will finish the trek back at the Visitor’s Center and can make a short walk to the park entrance to wait for outbound taxis.

Counterclockwise: If you’re stubborn like me, the other route offers immediate views of the lake, but a seemingly endless ascent. Get dropped off at the Visitor’s Center and take the trailhead to the right. Once you’ve reached the far side of the lake, you’ll dip into the grassy meadow for a few more steep inclines and cow sightings. Eventually, you’ll come out on a road where you’ll walk down to the Visitor’s Center (~2km) and wait for outbound taxis. Hailing a car can take a while! 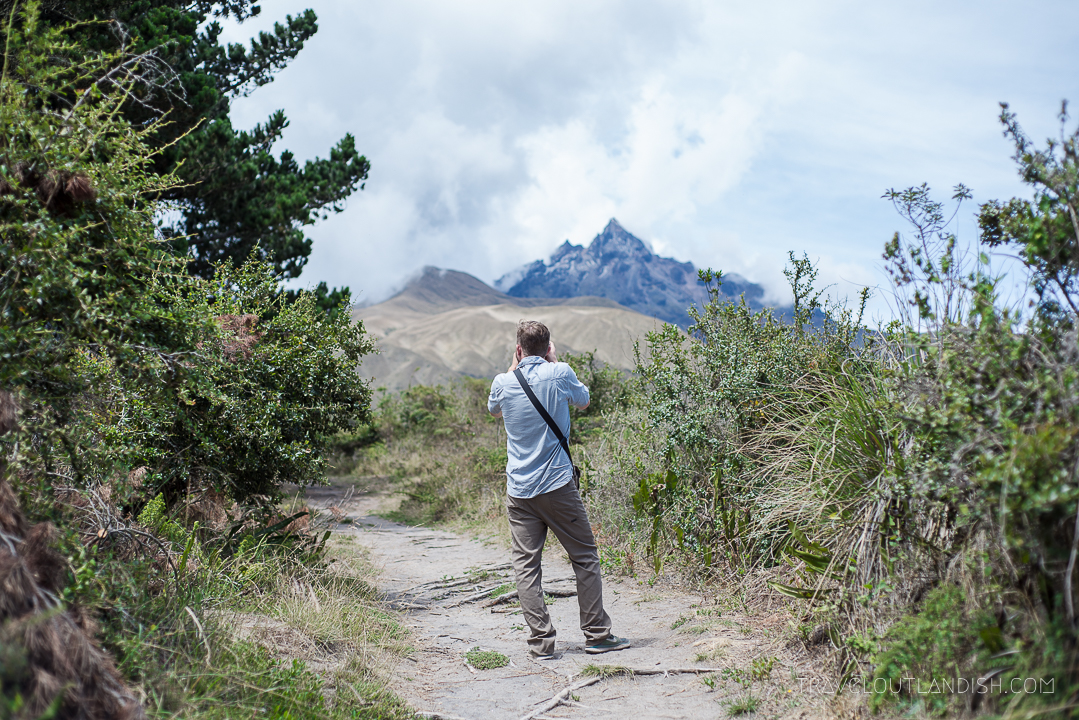 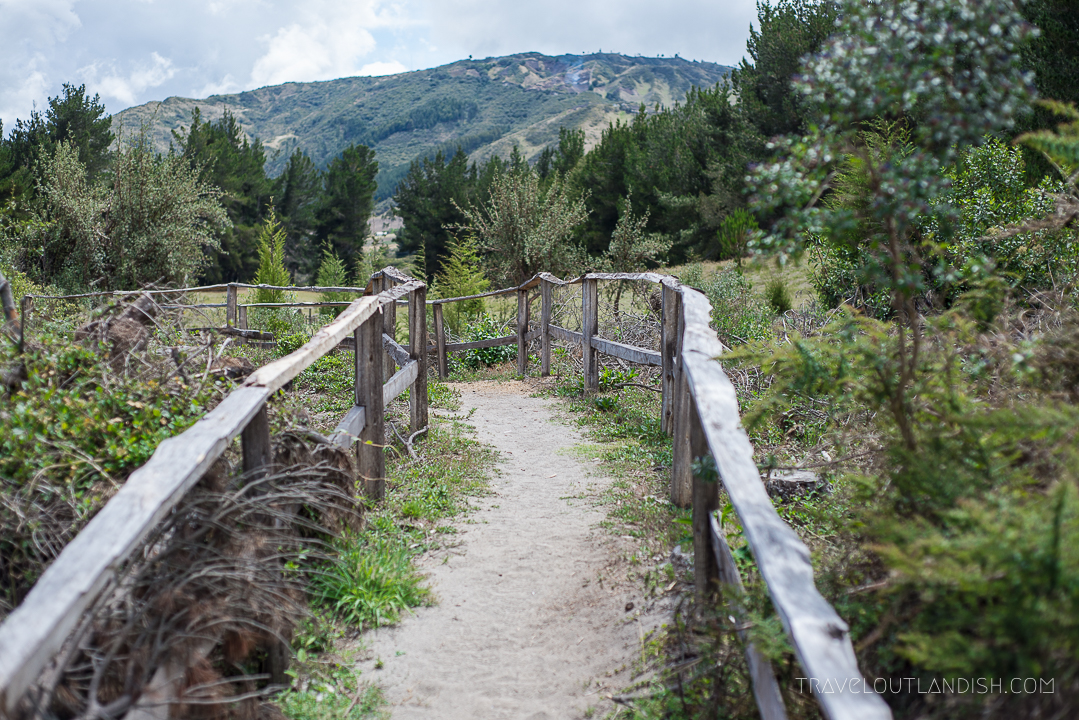 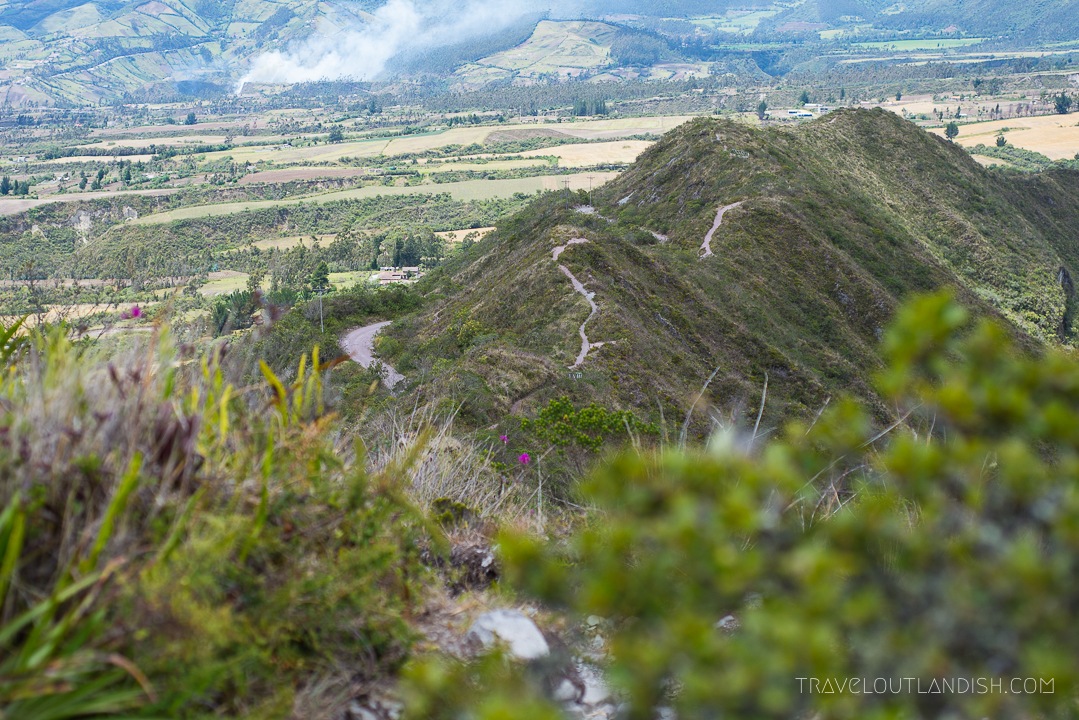 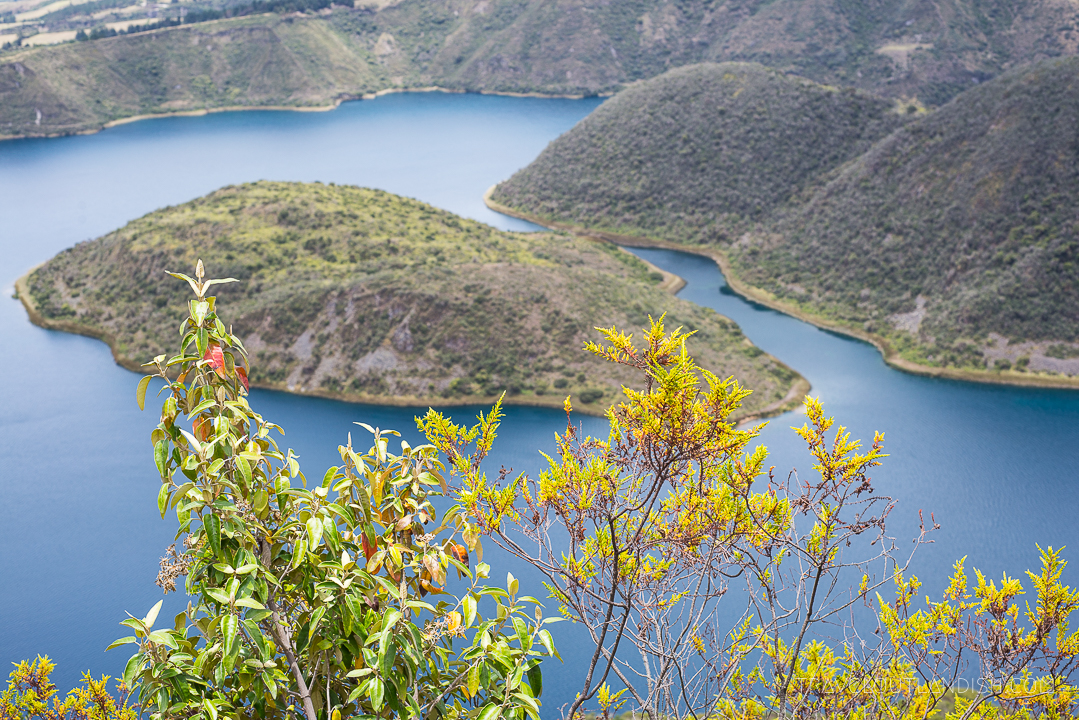 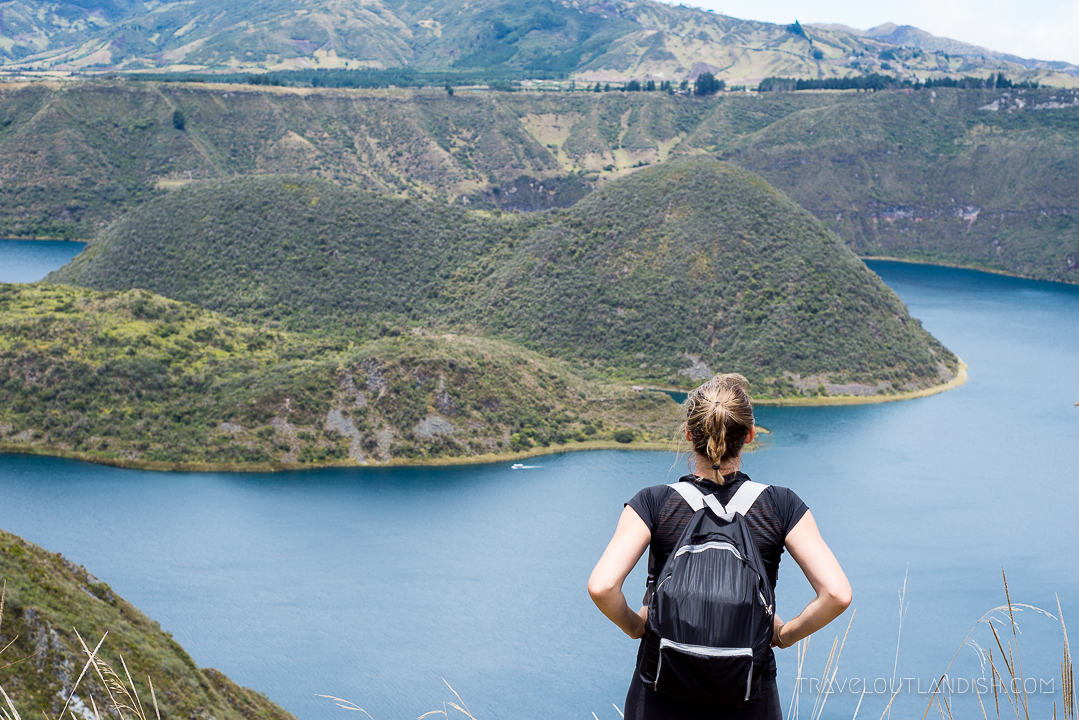 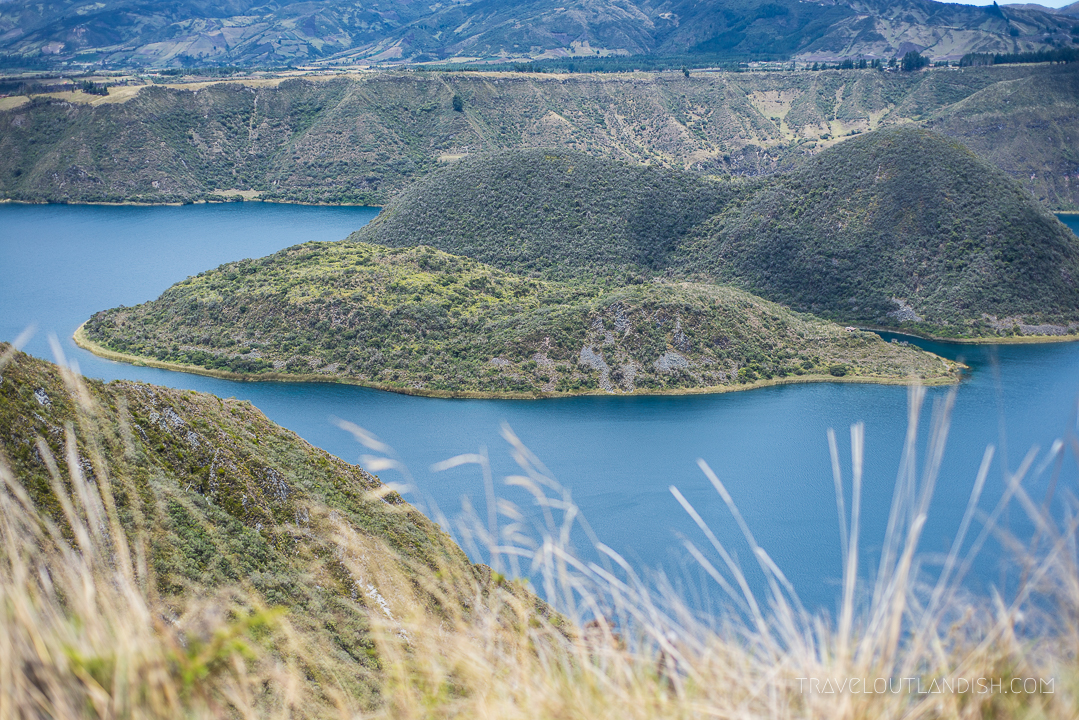 HOW TO GET TO LAGUNA DE CUICOCHA

Laguna Cuicocha is 107km from Quito and 25km outside of Otavalo.  It’s a 40-minute drive from Otavalo to Cuicocha, but the cheapest route is to take the local bus about 30 minutes to Cotacachi ($.35) and hire a taxi Laguna de Cuicocha ($5-$6).

Finding transport back to Otavalo is A LOT harder. Supposedly it’s possible to catch a taxi, but we waited for two hours and still ended up hitching a ride with a school group traveling by private bus. Avoid getting stranded by scheduling a pickup with the taxi driver who drops you off. 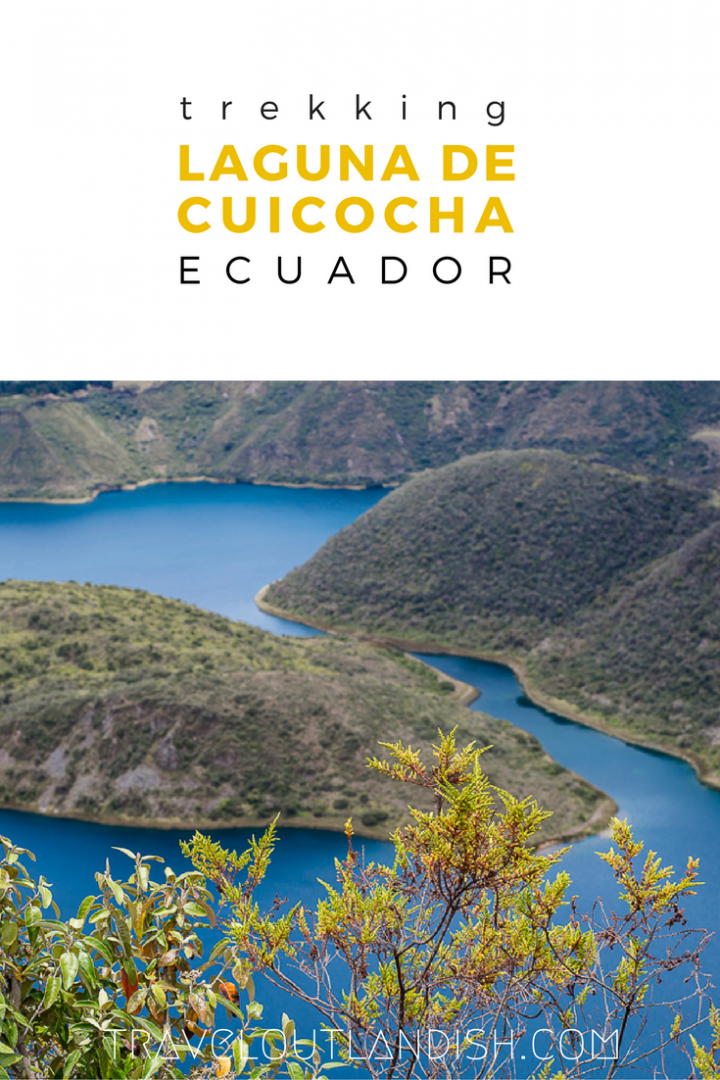